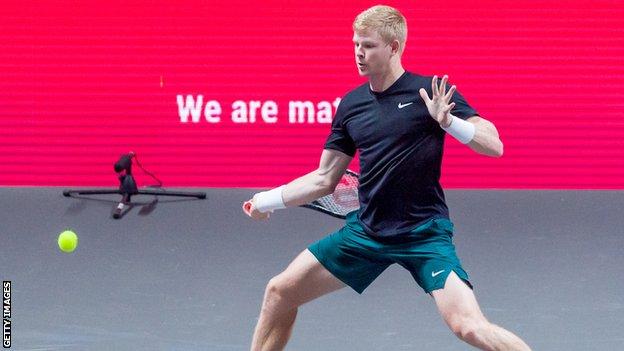 Kyle Edmund started having problems with his left knee in 2018

Former British number one Kyle Edmund is likely to miss several more months of the season after having surgery on his left knee.

Edmund, who has not played for six months, underwent a "small procedure" in Switzerland at the end of March.

It was performed by Dr Roland Biedert, who has operated on Roger Federer, Stan Wawrinka and Juan Martin del Potro.

Edmund's problems began in October 2018, when a scan revealed fluid behind the left knee.

The 26-year-old had reached the Australian Open semi-finals that January, and just won the European Open to climb to a career-high ranking of 14.

But despite winning a second ATP title in New York in February last year, Edmund's progress since has been consistently thwarted.

He currently stands at 69 in the world and has not played since losing in the first round of qualifying in Vienna last October.

Edmund had been resisting surgery, due to the obvious risks for a professional athlete, but the nagging pain in his knee has increased since the start of the year and prevented him from practising.

A long period of rehabilitation is now underway, and an appearance at Wimbledon seems a forlorn hope.