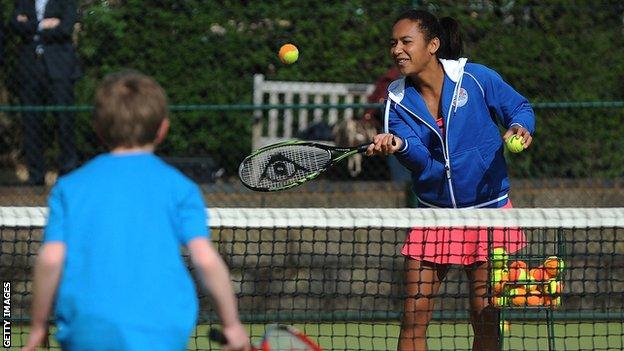 The Lawn Tennis Association says it wants to "change the perception of the sport" following the launch of a new strategy aiming to increase diversity among players, coaches and fans.

The governing body published its inclusion strategy on Thursday, with the target of making tennis more representative of British communities.

"Tennis needs to be more diverse," Miles Daley, a 28-year-old black coach from London, told BBC Sport. "Essentially it is seen as an elitist sport."

The LTA says it wants the people who play, work, volunteer in and watch tennis to "reflect the diversity of the nation's communities".

Data on the sport's current diversity levels has been gathered and analysed, with the LTA committing to continuously tracking and publishing new figures.

"We are fortunate with the fact the diversity of our player base broadly reflects the overall scale of, for example, ethnic diversity in this country. And, as a sport we have always proudly led the way on gender equality," Scott Lloyd, the LTA's chief executive, told BBC Sport.

"From a player-based position we are very well positioned. But we need to make sure we can ensure representation is seen at each and every level of the sport.

"The strategy is an important step in our mission to open tennis up and ensure tennis can be played and enjoyed by anyone, no matter their age, background or ability."

One of the LTA's first moves as part of the strategy has been the appointment of two new non-executive directors – Sanjay Bhandari, the chair of anti-discriminatory group Kick It Out, and Anil Jhingan, a media and entertainment executive – to its board.

That Peter Crouch Podcast: What goes on in the Premier League Captain's WhatsApp group?Just One More Thing The simple home workout that is proven to boost your brain power
Source