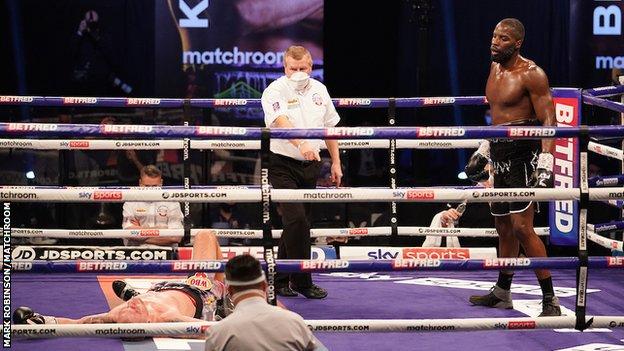 Okolie now has 16 wins from 16 fights

He started unloading his right hand in the fourth and looked completely at ease against a former world champion.

"I think I might cry in my hotel room, but not in front of anyone. It's a blessed feeling. It's crazy," Okolie told BBC Radio 5 Live.

"It's important that I become one of Britain's best cruiserweights and I have the opportunity to do that. This was a good win but there are more tests ahead."

'So many people I can inspire' 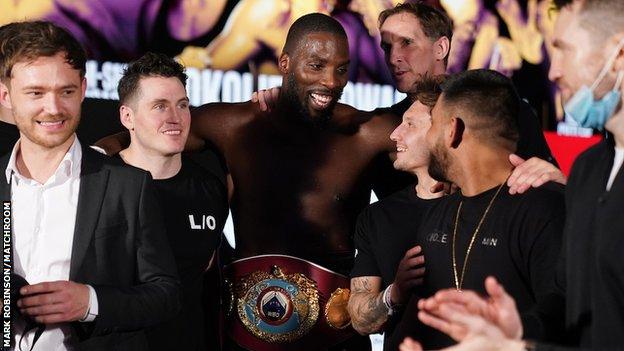 The Hackney fighter has come a long way in every sense. Bullied in his teenage years, he used boxing to build self-esteem and shed weight. After an Olympic appearance in 2016, his early years as a professional were the focus of harsh words and ridicule when a run of fights descended into drab, scrappy affairs.

But Okolie's work ethic in the gym and desire to improve have impressed and a run of slicker displays thrust him into a world-title fight that he dominated from start to finish.

Glowacki – 34 and only beaten twice by Oleksandr Usyk and Mairis Briedis previously – simply had no answer. Those who back Okolie speak of the awkwardness his huge frame causes opponents and believe he will go on to prove a menace at heavyweight.

Here, his size allowed him to work at distance and his power shone through when called upon.

A smart hook in the first, crisp jabs in the third and a succession of hard right hooks in the fourth left the bloodied Glowacki in no doubt that his opponent was more than capable of dealing with a gulf in experience.

And in the sixth, when Glowacki crouched in search of an opening for a second too long, a right hand to the jaw left him unable to make the count and secured the world title Okolie believes will allow him to inspire children on the estate in which he grew up.

"Doing all these interviews, realising how much this means – not just to me but to so many people that I can inspire – it feels amazing to go in and actually get it done," added Okolie.

"I'm coming into my own, starting to believe in boxing. I used to just believe in my physical strength, the fact I can hit someone hard and stop them. Now we're getting in to boxing. Keeping it long, moving it fast… I'm just happy that there's progress."

Some may point to Glowacki's 21 months out of the ring – including a spell suffering with Covid-19 – as evidence of a fighter who was vulnerable.

But the poise Okolie showed, the ease with which he handled the occasion and the destructive finish served up all point to a fighter going places.

A world title seemed a distant dream when he worked in McDonalds less than a decade ago and when criticism flowed his way for ugly displays in 2018.

Not for the first time, Okolie has emerged from testing times and can now add world-champion status to the British, Commonwealth and European honours he has already collected.

'Unify and hit heavyweight' – what they said… 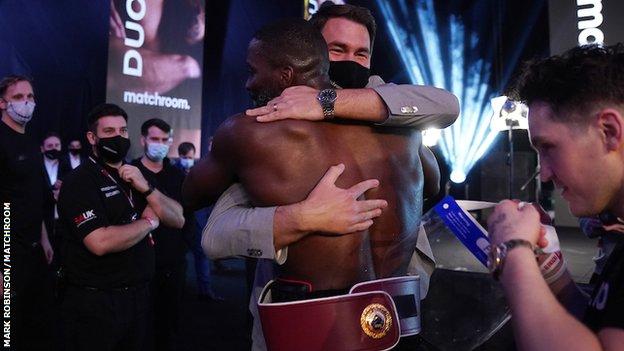 BBC Radio 5 Live Boxing analyst Steve Bunce: "There's one or two people in British boxing who tend to think Okolie is cocky, that he is too flash.

"He's got a touch of Naseem Hamed about him. That's confidence, not arrogance. He's a really decent man. That's pure confidence.

"We saw it in this fight – he never once took his eye off what he had to do. Every moment he was thinking, learning. He could have tried to force it but he didn't. That's what I like about him."

Promoter Eddie Hearn: "That was one of the great performances to win a world title. Krzysztof Głowacki is one of the top five cruiserweights in the world.

"He is a novice and he has stepped in tonight with 15 fights, and you just wonder if he is good enough? My goodness, that was as good a performance to beat any cruiserweight. That's what we want to do, to unify the division and then step up to heavyweight."

British heavyweight Joe Joyce on Radio 5 Live: "Okolie is improving all the time, it's only going to go strength to strength. Long range, devastating power. I'm looking forward to some big fights for him."

'As awkward as they come' – social reaction

Former European champion Spencer OliverYour Film Night: A talented young drummer is pushed to his limits in this psychological dramaMOTDx: Football, music and culture from the Premier League with Jermaine JenascommentsView Comments14

To use comments you will need to have JavaScript enabled.
14 commentsShowLatestOldestHighest RatedMost RepliedI

00:23It seems to me that some of the comments here have been posted by individuals who have consumed several alcoholic beverages. Good win for Lawrence Okolie.20P

00:20How does beating people up inspire kids on an estate ?02R

00:19Great performance, but loved
how genuinely humble the lad also is. None of this fake humility you get from his stable mate.

Hope this kid has a massive future.01K

00:07Great performance and an incredible achievement from Okolie. Massive respect for the man 🇬🇧🇬🇧🇬🇧

Shame the presenters & commentators on Sky had to go on about his past job ‘flipping burgers,’ though. Such a lazy phrase; intended to inspire but instead dismissive & disrespectful towards a lot of hardworking people. Ordinary folk are not failures because they haven’t won a boxing world title.31W

00:05Good fight, and what a talent Okolie could turn out to be! Not watched a lot of boxing since the pandemic began and that really reminded me why I started watching boxing in the first place. Tougher opposition ahead no doubt, but he gave a very solid account of himself tonight.10E

00:03Good execution of skills but Głowacki is a bit of a bum and there will be much tougher fights to come.20M

23:50 20 MarThat was absolute masterclass. I can’t see anyone defeating him in the cruiserweight. He has identical power like AJ. He definitely will unify the division and then move up to heavyweight.23L

23:35 20 MarLooked soooooo easy dismantling his opponent. Adding weight to his 6ft 6in frame and stepping up should prove no problem at all.54D

Must watch next week.

Well done to the lad.72G