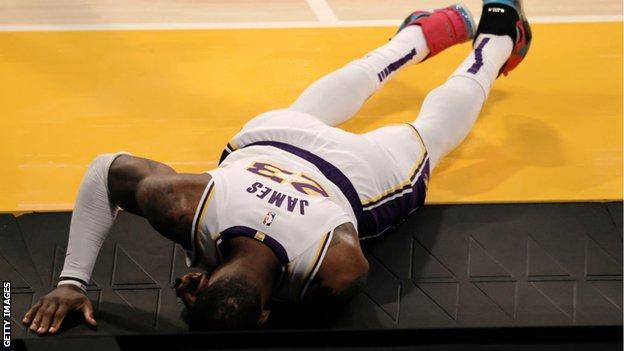 LeBron James will be "out indefinitely" after sustaining a high right ankle sprain in the Los Angeles Lakers' 99-94 defeat by the Atlanta Hawks.

James, 36, screamed out after rolling his ankle in the second quarter on Saturday and had to leave the game.

The Lakers are already without injured forward Anthony Davis, who starred alongside James in leading them to the NBA title last year.

"I'm hurt inside and out right now," James said on social media.external-link

"Nothing angers and saddens me more than not being available to and for my team-mates.

"The road back from recovery begins now – back soon like I never left."

Four-time NBA champion James was injured in a collision with Solomon Hill as the Hawks forward dived for a loose ball and landed on James' leg.

After going down and clutching his ankle, James briefly returned to hit a three-pointer but soon had to limp back to the locker room, knocking over a chair in frustration on his way.

The Lakers later confirmed he had a high right ankle sprain and will be "out indefinitely".

Lakers players Montrezl Harrell and Dennis Schroder criticised Hill for an "unnecessary play" but Hill responded on social media by saying he "would never disrespect the game and take a player out purposely" and that he is "praying for a speedy recovery" for James.

The Lakers struggled in James' absence as John Collins' 27 points led the Hawks to their eighth straight victory, taking them to joint fourth with the Miami Heat in the Eastern Conference.

The Lakers, who are third in the Western Conference behind the Utah Jazz, now face a run of games without their two biggest stars, with Davis having already missed 14 successive games because of a calf injury and not expected to return until April.

Elsewhere, Eastern Conference leaders the Philadelphia 76ers beat the Sacramento Kings 129-105, despite the absence of Ben Simmons and Joel Embiid.

Simmons was ruled out late on with a sore left knee, while Embiid is still out with a bone bruise in his left knee.

Tobias Harris hit 29 points and Shake Milton added 28 to see off the Kings.

Two-time reigning Most Valuable Player Giannis Antetokounmpo had 26 points and 15 assists as the Milwaukee Bucks beat the San Antonio Spurs 120-113.

The Memphis Grizzlies beat the Golden State Warriors 111-103, while the Los Angeles Clippers eased past the Charlotte Hornets 125-98.

Your Film Night: A talented young drummer is pushed to his limits in this psychological dramaMOTDx: Football, music and culture from the Premier League with Jermaine Jenas
Source