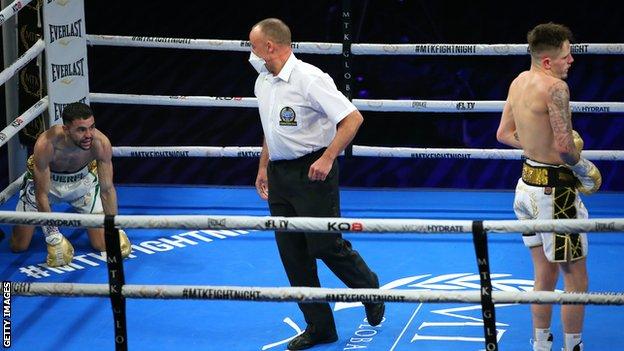 "I would give up everything, all those belts, just to bring him back."

Lee McGregor's firm voice grows brittle as he talks about his grandfather, the man who shaped a young life laced with glory and tragedy perhaps more than anyone. Jim Aitchison died a little over three years ago, not long after McGregor went from hotshot amateur fighter to professional boxer ready to take the sport by the scruff. In that time, he lost his mother, a cousin, a grandmother and then his dear 'granda'.

Jim wasn't there to see his boy become a British and Commonwealth champion. He didn't get to witness the spectacular first-round demolition of Karim Guerfi last Friday, to add the European bantamweight belt to McGregor's burgeoning collection in just his 10th pro fight.

"It makes me sad; it makes me proud as well," the 24-year-old tells BBC Scotland. "It's so, so hard. Time is a healer, but when I sit back and get time to myself, it breaks me in two.

"He was the proudest guy out of everybody. I can't explain enough how much he influenced my life. I got a nice message from his brother, my great-uncle Henry, when I won the fight: 'listen, your granddad might not be here to tell you how proud he would be of you, but I am'.

"I would do anything just to get him to see this. I hope he is getting to see it and one of the main reasons why I am so hungry to keep on going is that I know for a fact he will be bursting with pride."

Three times in that opening round, McGregor clattered Guerfi. Three times, the veteran's legs buckled. It was a masterpiece in meticulous research and thunderous brutality.

"No matter what, he was going to be in for a long, long night," explains McGregor. "I didn't expect to dismantle him in two and a half minutes, but the principle and thought process was the same.

"The plan was to make him feel like he was hitting a brick wall. There was only so much scooting around the ring he could do. The first one just landed sweet, he went down. It just showed how strong I was in that he couldn't really deal with it."

'I want to be a multiple-weight world champion'

The ascent has been searing; the ambitions lofty. McGregor hopes to fight on the undercard of MTK stablemate Josh Taylor's undisputed world super-lightweight contest with Jose Ramires in Las Vegas. He sees it as the next step on his voyage to becoming a world champion.

"If you'd told me that I'd be British, Commonwealth and European champion in 10 fights when I'd first turned pro, I'd have laughed in your face," McGregor says. "If you tell me I'll be world champion by the end of the year, I'll definitely not be laughing in your face. That's a realistic goal. 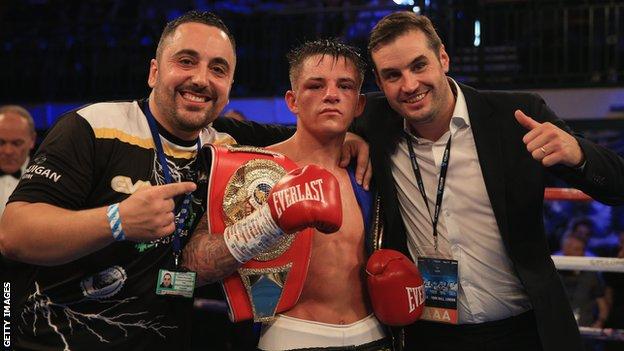 "I would love to fight an American name in Vegas, a guy who is ranked as highly as me, even as an eliminator for a world title fight. I'm not scared of any challenge. My goal is firmly set on becoming world champion, whatever it takes.

"When I do get that, I'm not finished. I want to be a multiple-weight world champion.

"The main thing with me is I'm not scared to lose. That's a lot of people's problem. They're never going to achieve their dreams because the fear of losing stops them taking risks. I firmly believe whoever is in that opposite corner, they're going to have a hard night.

"My sheer physicality alone, never mind the rapid progression I'm making under Ben Davidson, my new trainer. These guys want to get me sooner than later. Unfortunately for Karim, that November date would have been a lot more ideal for him. The more time they're giving me to improve, the harder it's going to be for them."

Normally, in the wake of such a euphoric triumph, McGregor would be holding court in an Edinburgh pub, engulfed by mates and an ocean of beer. The drinks would flow and the celebrations would be raucous.

The pandemic put paid to all of that. Instead, these past few days have been serene, a time for reflection and diligence. McGregor dotes on his two-year-old daughter, Maddison-Blue, and he thinks often of Jim and the loved ones he has lost.

"When people say to me, for example, 'How do you deal with cancellations?' It is really hard, but look what I've been through at the age of 24. A couple of cancellations are a piece of cake compared to what I've had to deal with.

"Normally I would have been in the pub with all the boys, a massive party. It's just been nice to not do that, in the nicest possible way to all my friends. I'm just so happy to be back with my family. I woke up on Monday morning, ran a nice 15km, got my wee one, went a big walk up Arthur's Seat and got some ice cream.

"It's normality, but still getting my training done. I'm so content with life and my career just now. I'm in the best possible headspace I could be in. I've been through a hell of a lot, but everything is in the best position – every single thing."