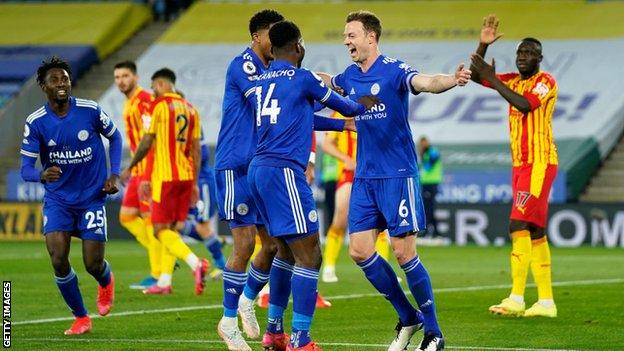 Leicester opened up a four-point gap to fourth place in the Premier League with victory over relegation-bound West Brom at the King Power Stadium.

Three goals in 13 first-half minutes did the damage as striker Jamie Vardy scored one and assisted another.

Vardy was teed up by Timothy Castagne for the opener, before he set up Kelechi Iheanacho after a driving run down the left for Leicester's third.

Centre-back Jonny Evans had nodded in a deflected corner to make it 2-0.

In a game that had several goalscoring opportunities, Castagne and West Brom's Matheus Pereira also hit the woodwork in the first half.

Victory means Leicester are now four points clear of Chelsea, who occupy the final Champions League qualification spot with six games remaining. The two sides meet in the league – as well as the FA Cup final – next month.

West Brom are on the brink of relegation as they remain nine points from safety and have a far inferior goal difference than 17th-placed Burnley.

Relentless Leicester round off memorable week 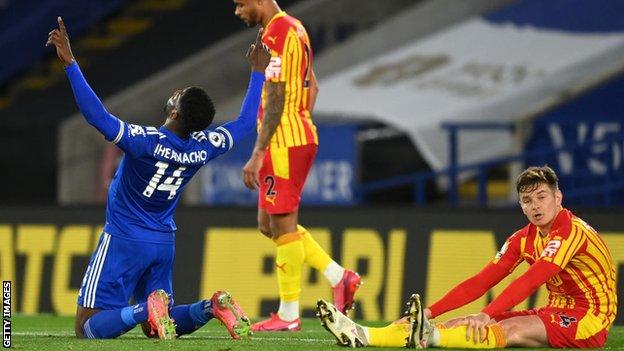 Kelechi Iheanacho has scored 13 goals in all competitions in 2021

After booking their place in the FA Cup final on Sunday, Leicester could not have finished the week in better fashion.

They looked eager to get on the front foot from the off – carving West Brom's defence apart with through balls from Youri Tielemans and driving runs from Vardy and Castagne.

Iheanacho and James Maddison both had chances in the opening 10 minutes, before Tielemans eventually played in Castagne and he put it on a plate for Vardy to thump it in.

West Brom defender Dara O'Shea's last-ditch tackle on Iheanacho prevented an immediate second for Leicester but the reprieve was short-lived as Evans then nodded to make it 2-0 within three minutes of Vardy's opener.

Striker Vardy turned provider when he skipped past his opponent and teed up Iheanacho for Leicester's third.

That goal came after West Brom's Pereira and Leicester's Castagne had both hit the woodwork and there could have been another goal via Iheanacho before the break when he lashed it over from six yards out.

The relentlessness of Leicester's attack in the first half did the damage but they still enjoyed plenty of space in the second half – Iheanacho seeing a shot blocked by O'Shea in the box and a free-kick palmed away by goalkeeper Sam Johnstone, while Vardy's long-range chip sailed wide.

Manager Brendan Rodgers was also able to bring off Maddison, Vardy and Wesley Fofana with Monday's game against Crystal Palace in mind.