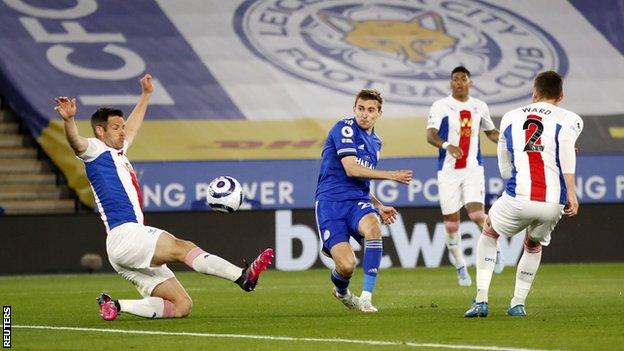 This was Timothy Castagne's second goal for Leicester, but his first since the opening game of the season

Leicester City moved closer to Champions League qualification as they came from behind to beat Crystal Palace.

Wilfried Zaha put the visitors ahead after only 12 minutes, with a first-time finish following a fine through ball from Eberechi Eze.

But Timothy Castagne equalised for the Foxes within five minutes of the second half by firing the ball into the roof of the net after being set up by Kelechi Iheanacho.

Palace nearly retook the lead but a superb sliding challenge from Jonny Evans denied Christian Benteke what would have been a tap-in into an unguarded goal.

That missed chance proved crucial as Iheanacho scored his 12th goal in nine games, when he cut inside on to his left foot and blasted the ball past goalkeeper Vicente Guaita for a late winner.

The result leaves the Foxes third in the Premier League, but takes them seven points clear of fifth-placed West Ham with five matches to go.

"It's a massive three points for us and we were nervous a bit," said Iheanacho.

"We changed it around and got control of the game and got them running. But there's still a lot of work to do, we can't talk about the Champions League until the last game."

Leicester, who have also reached the FA Cup final for the first time since 1969, have only played in the European Cup or Champions League once, reaching the quarter-finals in 2016-17 after winning the Premier League the previous season.

Their run-in includes games against Manchester United in second, Chelsea in fourth and Tottenham in seventh.

How has Iheanacho become so prolific?Relive Leicester v Crystal Palace as it happened, plus reaction and analysisListen to the latest Football Daily podcast

After 33 matches of the league campaign, Brendan Rodgers' side again find themselves third, just as they did in 2019-20.

However, last season they lost three of their final five games as they finished fifth to miss out on a top-four spot by four points.

Before the game, Rodgers said his side had improved and "evolved" compared to a year ago, but would have been worried by old concerns and a lacklustre first half performance.

But it was an instant improvement after the break as Castagne's first goal at the King Power Stadium made it 1-1 following fine hold-up work from the impressive Iheanacho.

The Foxes ended strongly as Jamie Vardy, who had missed two chances when it was goalless, had a shot blocked by Guaita, fired just wide and had a goal correctly disallowed for offside.

Youri Tielemans also missed the target when well placed but they finally got their second when Iheanacho produced some fine skill to get the ball on to his left foot and gave Guaita no chance from 10 yards.

The victory means Leicester, who were not one of the 'big six' English teams to sign up to the European Super League before the tournament plans collapsed two days later, now need three more wins to guarantee Champions League football.

Palace stay 13th, but are 11 points clear of the relegation zone and surely safe from avoiding a drop into the Championship.

But Eagles' fans may be left ruing what might have been from this season after they were seventh following eight matches, only three points off the top.

Inconsistent form and a run of injuries have severely damaged their hopes of a top-half finish for the first time since 2014-15 and they have now only picked up six points from their past seven matches.

They had not been in action since 10 April, while Leicester had played three matches in that period, including an FA Cup semi-final win over Southampton to set up a final against Chelsea next month.

Palace boss Roy Hodgson said before the game he was unsure whether the break would have benefited his team, although they made a great start, scoring early on. 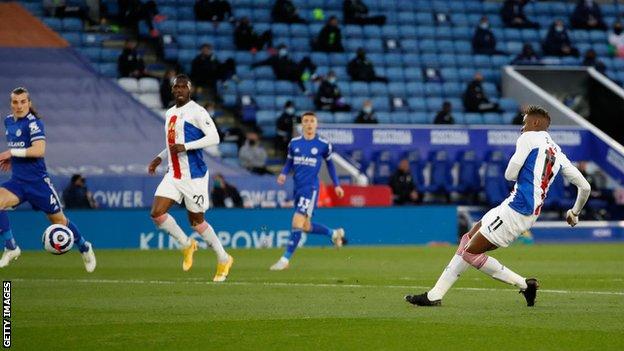 Wilfried Zaha has been involved in seven goals in his last seven Premier League appearances against Leicester, scoring six and assisting one.

Benteke dispossessed Tielemans with a strong challenge on the halfway line, Eze had the quality and pace to run at the home defence, before sliding a perfectly-weighted pass into Zaha's path with the Ivorian slotting the ball past Kasper Schmeichel.

After conceding, the visitors had a glorious chance to retake the lead as Jairo Riedewald was through on goal but opted to pass it square to Benteke and that enabled Evans to make a fine challenge to deny the Belgian.

Leicester have picked up 62 points from their 33 Premier League games this season, only managing more at this stage of a top-flight campaign in 1962-63 (66) and 2015-16 (72).Crystal Palace have not won any of their last 18 league games against sides starting the day in the top six in the table (drew five, lost 13), since beating fifth-placed West Ham 2-1 in October 2019.Leicester have picked up 19 points from losing positions in the Premier League this season, a figure only Manchester United can better (28). Crystal Palace forward Wilfried Zaha has been involved in seven goals in his last seven Premier League appearances against Leicester, scoring six and assisting one. Only Harry Kane (14), Dwight Yorke (eight) and Andy Cole (seven) have netted more Premier League goals against Leicester than Crystal Palace winger Wilfried Zaha (six). Eberechi Eze registered an assist for the first time in 10 Premier League appearances, with the midfielder now joint-top for assists in the competition this season among Crystal Palace players (four, level with Andros Townsend). Leicester's Timothy Castagne scored just his second Premier League goal in 22 games, netting for the first time since his first appearance in the competition in September v West Brom. Kelechi Iheanacho has either scored (12) or assisted (two) in eight of his last nine appearances for Leicester across all competitions. Only Harry Kane (18) has registered more goal involvements than Kelechi Iheanacho (16 – 14 goals, 2 assists) among Premier League players in all competitions in 2021. Kelechi Iheanacho has netted 14 goals in his last 14 appearances for Leicester in all competitions, as many as he managed in his previous 76 games for the Foxes.

'I thought we'd see the game through' – what they said

Leicester City manager Brendan Rodgers to BBC Sport: "It was a very important win for us. It was the third game in nine days so a tough schedule.

"Going one behind against a Roy team, they're super organised and tough to break down. I thought the players were outstanding. They kept the calmness and control and scored two very good goals.

"[Scoring early into the second half] definitely helps. It sets us up. It settled us. We could then control the rest of the game.

"[Iheanacho's goal was] incredible. Great pass by Jonny [Evans]. We told the strikers to find space in between the centre-backs and full-backs. It was a great ball into space. The skill to turn and finish quickly, a wonderful goal. It capped off a great night for him.

"The top priority for me as a coach is helping players to develop. it's been difficult for Kels because of the style we normally played which was one striker – Jamie Vardy. We had to change it round with injuries, he's come in and been exceptional. Not just his goals. He's so happy to work hard for the team and his quality is phenomenal."

On any fears of them tailing away like last season: "We spoke about it at the start of the season and put it to bed then. Our performance levels this season have shown that's in the past."

Crystal Palace boss Roy Hodgson to BBC Sport: "I thought for long periods we were going to get at least a point. At half-time I thought we might go on to win.

"Leicester scored quickly after the break but after that we looked as though we were seeing the game through reasonably well. Kelechi Iheanacho's quick turn and strike is difficult to defend. Objectively I didn't think it was a bad performance. Had we got a good result I don't think people would have begrudged us."

On whether his players might lose focus with little on the line: "I don't fear that because I know the players. That's not the kind of group we are. I don't think anyone who watched the game could accuse us of not doing our utmost.

"If we hadn't conceded the goal so early in the second half, our confidence would have been high. The equaliser came too early after half-time. We didn't get enough time to enjoy the fact we were leading. I honestly thought we'd see the game through… but I was wrong."

Leicester play at Southampton on Friday (20:00 BST), a fixture the Foxes won 9-0 in 2019-20 when they equalled the record for biggest victory in Premier League history.