Tries from Vincent Rattez and Johan Goosen prove crucial as Montpellier seal the 2021 Challenge Cup title. The title triumph is Montpellier’s second in history, having lifted the trophy in 2016, too. Tigers scored through Harry Wells and Jasper Wiese but just fell short. 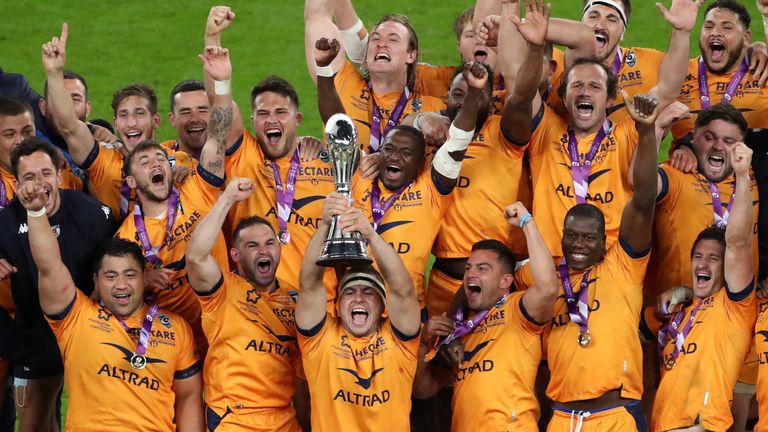 Montpellier picked up the second Challenge Cup title in their history, as their quality finishing just pipped the Leicester Tigers 18-17 in front of a raucous and socially-distanced crowd of 10,000 at Twickenham.

Despite having to play the final with 14 men for 20 minutes – No 8 Alexandre Becognee and hooker Guilhem Guirado both sin-binned either side of half-time – a clever Vincent Rattez try and spectacular Johan Goosen effort saw Montpellier claim victory.

Scrum-half Benoit Paillaugue also kicked two penalties and a conversion in the tight victory, as the French outfit added to their 2016 triumph in Lyon.

Leicester – whose rolling maul caused Montpellier consternation all evening – scored tries through second row Harry Wells and No 8 Jasper Wiese, and led on two separate occasions but could not respond at the end. 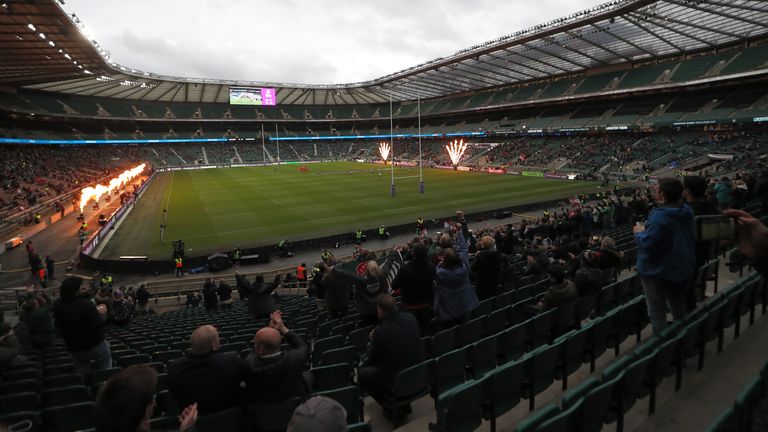 Twickenham welcomed back 10,000 fans for the 2021 Challenge Cup final

In fourth minute, a first glimpse of Leicester’s exceptionally powerful maul arrived, leaving Montpellier no option but to collapse it in midfield.

George Ford soon sent a gorgeous tactical kick nestling into touch, deep within the Montpellier 22, before a hurried clearance from Paillaugue – under extreme pressure on his standing leg by Wells – afforded the Tigers another opportunity to show off their driving maul. When the French side collapsed it again, Ford struck the opening points for 3-0. 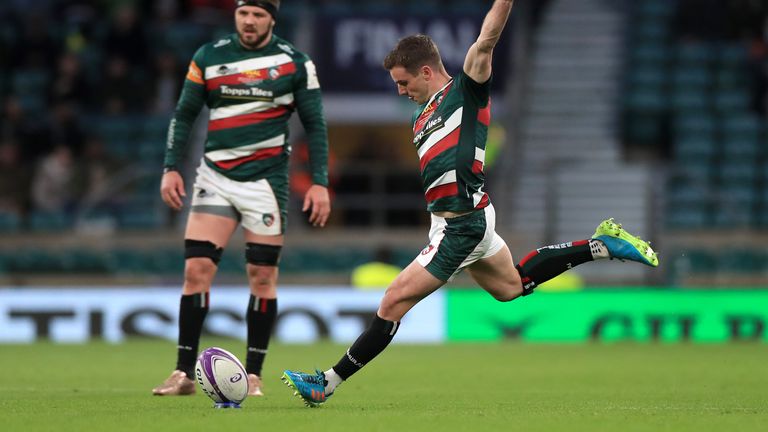 Montpellier, who came into the final as the club who have conceded the most penalty goals per game on average, fell foul of the referee again soon after for an off-the-ball block, but defended strongly before wing Rattez notched the opening try.

The origins of the score came when flanker Fulgence Ouedraogo made an initial bust in midfield, before Montpellier shipped possession to the left wing where Rattez grubbered ahead and just touched down the loose ball ahead of Leicester centre Matias Moroni, who had appeared favourite to ground in-goal. 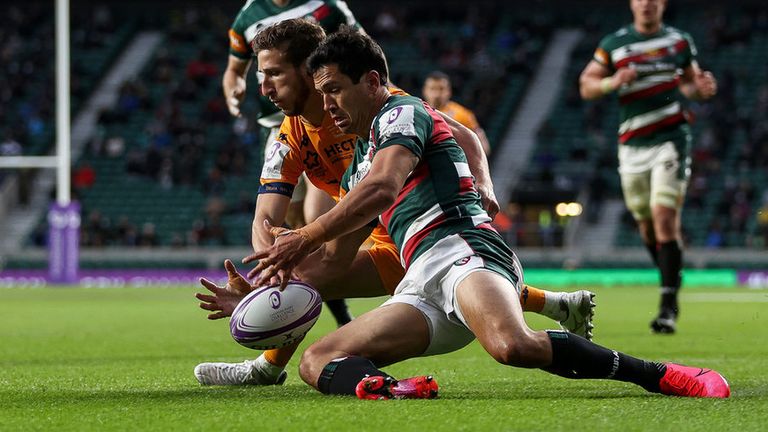 Despite appearing second best to Matias Moroni to get to the ball, Vincent Rattez grounded for a vital score 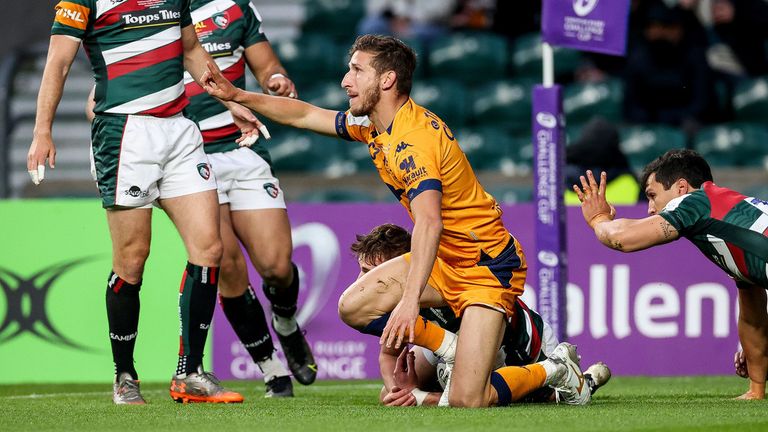 Within minutes of the restart, Leicester were caught offside at a Montpellier lineout, and when Paillaugue struck over expertly again – having sweetly dispatched a conversion from out wide just moments previously – the lead was out to 10-3.

Leicester’s set-piece once again got them back onto the front-foot, when a scrum penalty in the 22nd minute saw Ford kick to the corner. Montpellier stopped the maul at source on this occasion, however, before Becognee jackalled to earn a priceless defensive turnover penalty.

The Tigers had the next chance to score points too, as a Montpellier transgression at the breakdown offered Ford an effort from all of 40 metres, but his kick from the tee slipped wide. 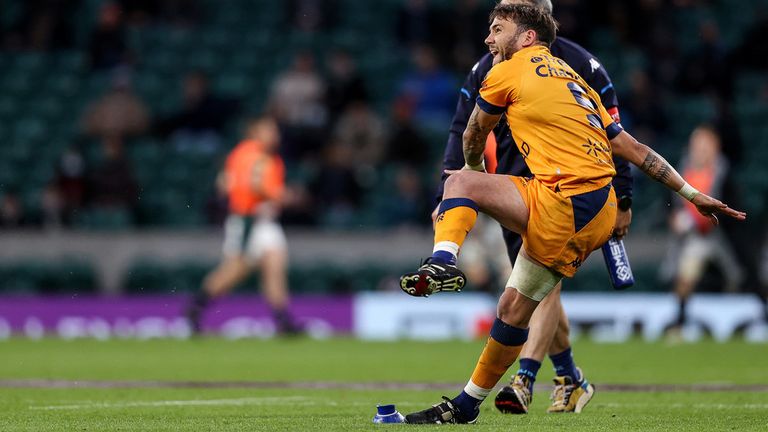 On the half-hour mark, a third penalty against Montpellier for illegally halting a surging Leicester maul saw Becognee sin-binned, and three minutes later the Tigers had their first try.

After one lineout within the Montpellier 22 had been botched, the Tigers made no mistake with a second, as another supremely dominant maul came within metres of going over, before Wells grounded from close-range to huge ovation. When Ford converted, the final was level at 10-10. 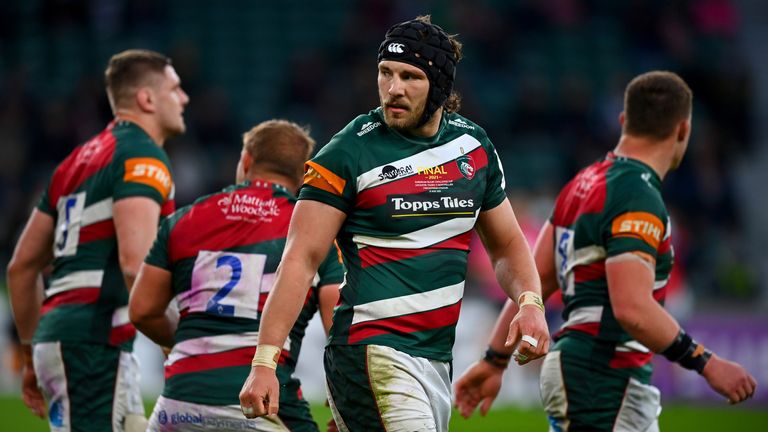 Harry Wells responded with a try from close range for the Tigers, after their maul had done damage routinely

Montpellier’s 14 had a chance for the lead in the final play of the half, when Leicester’s Kini Murimurivalu was pinged for going off feet, but Paillaugue hooked his effort wide from the same touchline he had previously landed two shots.

Into the second period, Montpellier made a terrible start as flanker Jacques du Plessis spilled the kick-off, a scrum penalty ensued, and a Tigers try almost followed: Nemano Nadolo touching down in the corner, but the score was ruled out for an earlier knock-on.

Tigers had been playing off a penalty advantage, however, and when Ford kicked to the corner again and another Leicester maul was stopped illegally, Montpellier skipper Guirado was sent to the bin.

With Guirado having barely departed the pitch, Leicester’s maul would not be denied as they stormed over for their second try after a quick throw to the front, as Wiese – the premier carrier and offloader in the tournament this season – touched down. 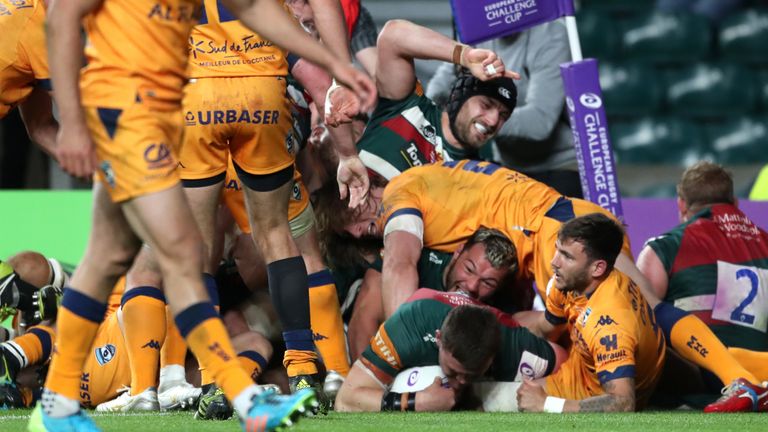 Ford converted with a superb strike, but Montpellier narrowed the gap instantly to 17-13, as Paillaugue split the uprights with a penalty after Moroni had failed to release.

Leicester, crucially, could not score again with Montpellier down to 14, and it was the French outfit who would cross next through Goosen after a magnificent sequence.

The move started with Gabriel N’Gandebe stunningly breaking from deep, before Paillaugue and Alex Lozowski kept the ball alive, Jan Serfontein offloaded inside to Anthony Bouthier, and the latter did likewise for Goosen to slide in. 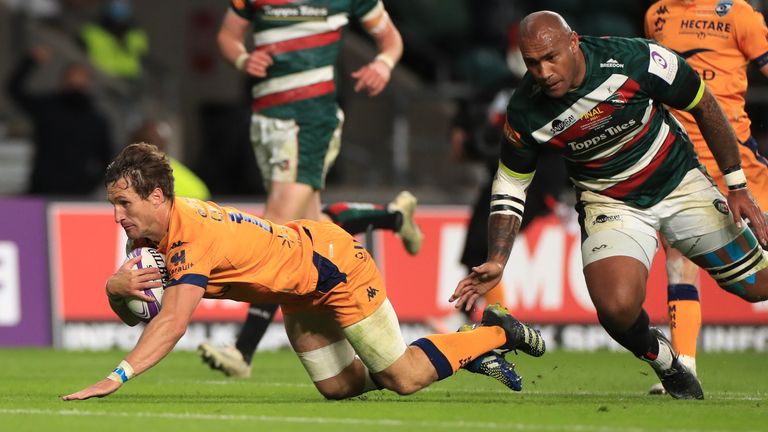 A penalty against Montpellier for sealing off at a ruck saw Leicester back into the 22 – having turned down a potential shot at goal – but the Tigers move fell flat when Ford rushed a drop-goal effort, and sent it wide.

Into the final 10 minutes, Montpellier replacement Handre Pollard had the chance to stretch the lead to four points, but he shanked his penalty effort from halfway.

Ultimately, Montpellier’s profligacy off the tee in the final quarter would not come back to haunt them, as they controlled the final few minutes before the end brought joy for Phillipe Saint-Andre and his charges.