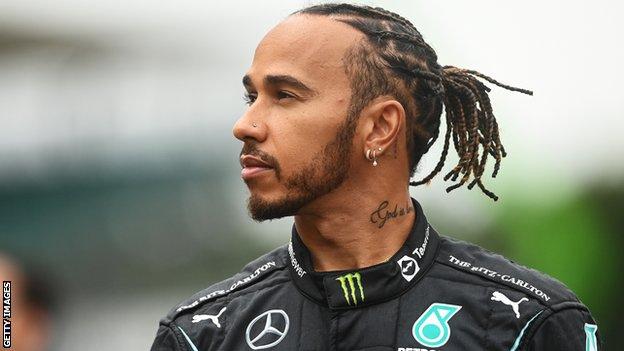 Lewis Hamilton has been the target of racist abuse on social media after his victory at Sunday's British Grand Prix.

Hamilton received a 10-second penalty after a collision with title rival Max Verstappen during the first lap of the race, which led to the Dutchman crashing out.

Mercedes, F1 and governing body the FIA condemned the abuse "in the strongest possible terms".

"These people have no place in our sport," read a joint statement.

"We urge that those responsible should be held accountable for their actions.

"Formula One, the FIA, the drivers and the teams are working to build a more diverse and inclusive sport, and such unacceptable instances of online abuse must be highlighted and eliminated."

Mercedes team principal Toto Wolff told BBC Radio 4's Today programme: "We have seen it in the football in the European Championship and the abuse that is absolutely not acceptable, and the same yesterday, and I still question whether some just don't get it.

"This is not acceptable and we will react to it."

Verstappen's team Red Bull Racing said it was "disgusted and saddened" at the abuse directed towards Hamilton.

"While we may be fierce rivals on-track, we are all united against racism," the team said in a statement. "We condemn racist abuse of any kind towards our team, our competitors and our fans.

"There is never any excuse for it, there is certainly no place for it in our sport and those responsible should be held accountable."

Facebook, which owns Instagram, said in a statement: "The racist abuse directed at Hamilton during and after the British Grand Prix is unacceptable and we've removed a number of comments from Instagram.

"In addition to our work to remove comments and accounts that repeatedly break our rules, there are safety features available, including comment filters and message controls, which can mean no one has to see this type of abuse.

"No single thing will fix this challenge overnight but we're committed to the work to keep our community safe from abuse."

Verstappen was taken to hospital for precautionary checks after suffering an impact of 51G in the crash, but was later released without any major injuries.

Hamilton's 10-second penalty saw him drop to fourth place after his pit stop, but the seven-time world champion fought back to overtake Ferrari's Charles Leclerc with two laps remaining to secure victory.

Verstappen later called Hamilton"disrespectful" and "unsportsmanlike" for celebrating the win while the Dutchman lay in hospital.

The incident comes a week after England footballers Marcus Rashford, Jadon Sancho and Bukayo Saka were targeted with racist abuse on social media after they all missed a penalty in the Three Lions' Euro 2020 final shootout defeat against Italy.

A mural honouring Manchester United striker Rashford was also defaced, though it was repaired the next day and later covered with hundreds of messages of support.

The UK government says it wants those found guilty of abusing footballers online to be banned from attending football matches and that its Online Safety Bill will do more to force social media companies to act.

In response to the abuse directed at the England players, Twitter said it had removed 1,000 posts and blocked accounts sharing hateful content, and had tools and filters that could be activated to stop account holders from seeing abusive content.