Formula 1 great Lewis Hamilton says helping motorsport become more diverse will be "the most valuable" thing he has achieved in his career.

Hamilton said he hoped the findings of a study he commissioned into improving the representation of minorities in the industry would be "part of my legacy".

The report was conducted in partnership with the Royal Academy of Engineering.

"I look back at my young self and wish it was different and I want to be a part of that change," Hamilton said.

"If I can change that, it would be the most valuable thing for me."

'Max is walking away with it right now,' says Hamilton

The Hamilton Commission's report was compiled by a series of experts on education, motorsport and diversity.

It found wider societal issues were affecting black students' opportunities within the UK motorsport industry, as well as specific barriers within the industry itself.

Mercedes driver Hamilton, a seven-time Formula 1 world champion, said: "We realise it's not just the motorsport industry that needs to change; we found there are still systemic issues facing young black people at all levels of the education system." 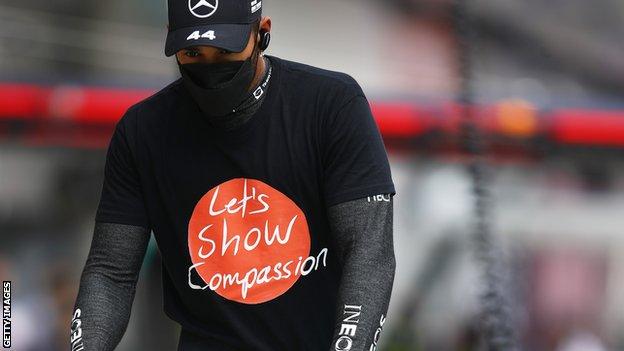 Why do the report?

Hamilton started work on setting up the commission after the 2019 F1 season, when he noticed the lack of ethnic minorities in photos taken by the teams.

He made its existence public last summer, after the global outcry against racial discrimination that followed the killing of unarmed African-American George Floyd by US police.

Hamilton, F1's only black driver, said: "The question has always been asked: 'What do I want my legacy to be?' I remember not perhaps giving it much thought.

"When I was younger, it was to be regarded as one of the best F1 drivers, but over time I have had the success, and the joy that brings is always short-lived.

"I have been thinking: 'Gee, there must be a reason that I somehow slipped through the cracks and not only got into the sport but am at the front of it and what am I going to do with all these titles?'

"The universe works in mysterious ways. At the end of 2019, I came up with this commission idea and we had started working on it and then the whole thing happened with George and that whole movement and it coincided with what we were trying to do and I really felt like I had discovered my purpose.

"I would like to be remembered for much more than winning championships, which is an amazing thing on its own, but for actually helping people and changing the industry and the viewpoints.

"We are all the same. We all bleed the same. There is no reason why it shouldn't be as diverse as the world around us. All it takes is the shift of the needle and then in the long distance that can be a whole continent's size. It could be huge." 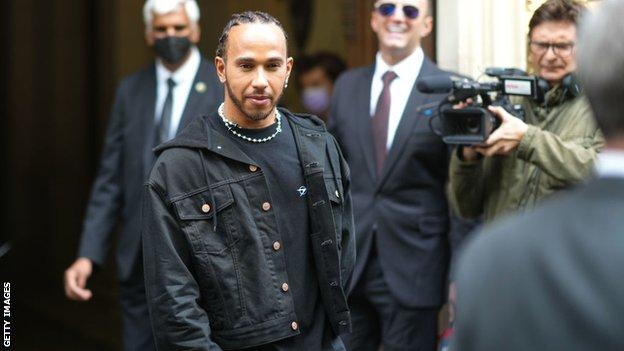 What are the recommendations?

Among the impediments to black success in the motorsport industry, the report found evidence of both explicit racism, and a lack of regard for the issue, as well as practical and logistical obstacles for candidates from minority backgrounds.

Among the issues raised were that none of the F1 teams had ethnicity data for their employees. Rhys Morgan, director at the Royal Academy of Engineering and an author of the report, said their figure of 1% of F1 employees being black was an estimation as a result.

The report highlighted recruitment practices in F1 tended to favour students from a select group of high-ranking universities, and a series of issues preventing the rise of black students in particular in science, technology, engineering and maths (Stem) subjects subjects in schools.

Hamilton said he wanted it to be a "commission of action".

Published on Tuesday, in the build-up to this weekend's British Grand Prix, the report makes 10 recommendations focused on access to Stem subjects.

Asking F1 teams and the wider industry to implement a diversity and inclusion charterBroadening access beyond the typical recruitment from a select group of universities, to include higher and degree apprenticeshipsThe establishment of a fund to address factors contributing to the high proportion of students from black backgrounds being excluded from schoolsNew approaches to increase the number of black students studying Stem subjects that lead to careers in engineeringCreating scholarship programmes for black students to study degrees in engineering and related subjects

Hamilton said he believed education was key to solving the lack of representation in motorsport, and racism in society as a whole.

He said the racist abuse suffered by England players Marcus Rashford, Bukayo Saka and Jadon Sancho after they missed penalties in the Euro 2020 final on Sunday was "devastating to see, but shows that as a nation we have a long, long way to go".

"In my opinion it stems from education," Hamilton said. "Growing up in a system where you don't learn about where you come from – I am only learning now.

"People ask me: 'Where do you come from?' I was born in the UK but half my family is from the West Indies, but never knowing the history of the West Indies.

"And I have been doing a deep dive trying to find out where in Africa my family originates from.

"It is an educational thing and that definitely needs to shift within the [school] curriculum.

"We need more support from social media platforms; we had the blackout earlier in the year but it's not enough. We need to stop that abuse that happens online.

"But definitely this commission highlighted one of the areas we can improve and I hope it starts a ripple effort of more change moving forwards."

Hamilton said he was working closely with F1 and governing body the FIA on the topic.

F1 president Stefano Domenicali said the report was "comprehensive and impressive", adding: "We completely agree that we need to increase diversity across the sport and we have taken action to address this and will be announcing more actions in the coming days.

"We want a sport that is representative of our hugely diverse fanbase and that is why F1, the FIA and all the teams are working hard to deliver on our detailed plans to create positive change across the sport.

"There is always more to do and the report will stimulate thoughts about further actions that are required."