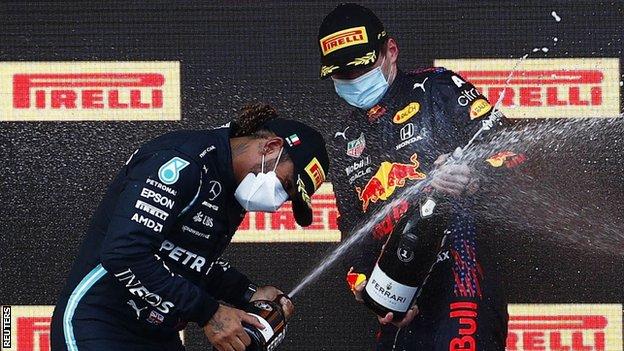 Two races down, two epic scraps between Lewis Hamilton and Max Verstappen. This year's Formula 1 world championship is turning into a fight for the ages.

There are still 21 races to go – at least that's the theory; the pandemic may well yet make F1's ambitions on that front impossible. But however long it lasts, a pattern for the 2021 season appears already set.

It is the Hamilton v Verstappen show; all others reduced to bit players.

There will be great performances from others as the season moves along – Lando Norris produced exactly that with a stirring performance to take third for McLaren at Imola – but they promise to be mere appetisers for a truly delectable main course.

After Hamilton won the first race in Bahrain against the odds, it was Verstappen's turn for victory at Imola as Hamilton escaped a potentially catastrophic mid-race error to fight back to second place. The point for fastest lap he earned as he passed Norris for second place with three laps to go is all that separates the two men at the head of the championship.

Hamilton, at least, seems already to be revelling in the prospect of a season-long scrap with the man who has earned the strongest claim to be his natural heir.

"Really excited for the battle," the seven-time champion said. "This is the first time in a long time that Red Bull have had a championship-winning car, so it is going to be close all the way through the year and it's just going to be hopefully more and more of these battles."

Verstappen, cautioned by seven years of Mercedes domination and perhaps still not quite believing the steamroller will not re-emerge, is more circumspect. After Imola he repeated what seems fast to be becoming a personal mantra.

"It's a very long season," he said. "I am happy about today but there is still a lot of work to do to keep this going for the whole season.

"It's great to be fighting against Lewis and Mercedes. As a team, they have been so dominant and they are very difficult to beat. It is very promising but there are no guarantees."

A brush and then a battle

Bahrain was a brilliant race between Hamilton and Verstappen but Imola was a whole other dimension. A pre-race rain shower drenched the track in some places, left it mostly dry in others, and set the stage for a truly remarkable piece of entertainment.

In Bahrain, Hamilton won the wheel-to-wheel tussle with Verstappen – the Red Bull running wide and over track limits as it passed the Mercedes late in the race, its driver forced to give the place back.

They went wheel-to-wheel again in Imola, this time on the first lap, and this time Verstappen came out on top.

After Verstappen made a better start from third on the grid, Hamilton tried to defend his lead on the outside into the first corner. Verstappen held his ground, Hamilton bounced over the kerbs, breaking a key aerodynamic part off his front wing.

"It's difficult to expect the grip on the first lap," Verstappen said. "I also ended up a bit wider than I wanted and then Lewis was also there. But at one point (there are) these yellow sausage (kerbs). Then I saw Lewis had to go over them.|

"I was basically avoiding us coming together," Hamilton said. "Max was just coming and coming and coming across. Of course, we had that touch and I had to use the exit, take those big kerbs. I'm grateful I just got it through it and didn't damage much more than the endplate." 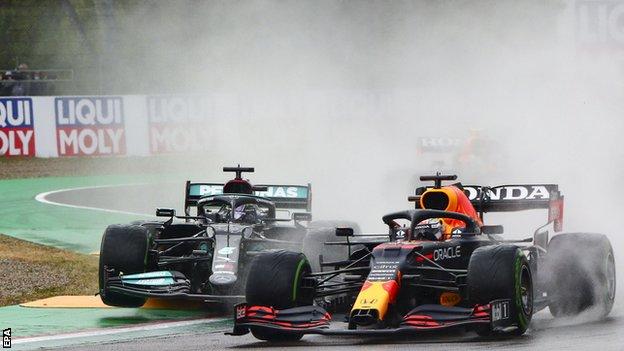 Once racing got properly under way after an early safety car, Verstappen built a five-second lead in just two laps and it appeared Hamilton, hobbled by the loss of downforce from his damaged wing and struggling to warm up his tyres to operating temperature, was already out of it.

But within three laps he had pegged Verstappen, and for the rest of the first stint the gap ebbed and flowed until after about 20 laps, as they approached the pit stops, Hamilton closed in as the track slowly began to dry.

The world champion had the lead down to two seconds when Verstappen pitted for dry-weather tyres on lap 27, Mercedes preferring to stop second because they feared they would lose out more from going first – because of those tyre warm-up problems.

It would have been close had it not been for two sticky front wheels at Hamilton's pit stop, and Verstappen's lead was out to five seconds again.

But then the Dutchman hit traffic. Hamilton closed in, sensing a chance. He made three seconds in one lap on the 30th tour.

Verstappen's lead was down to two seconds as Hamilton came up behind the Williams of George Russell to lap it. Russell tried to move out of the way at the Tosa hairpin. But it edged Hamilton on to the wet part of the track, and on his slick tyres he went straight on into the gravel.

Trying to recover, he made it worse. The car crunched into the barriers as Hamilton tried to coax the rear around, and broke his front wing. Then he couldn't get the car into reverse. It was the best part of a minute before he was back on track, now a lap down.

It looked like his race was over, but then his team-mate Valtteri Bottas, having an underwhelming day in the lower reaches of the top 10, crashed with Russell, littering the track with debris and bringing out the red flag.

A pep talk, and then a great recovery 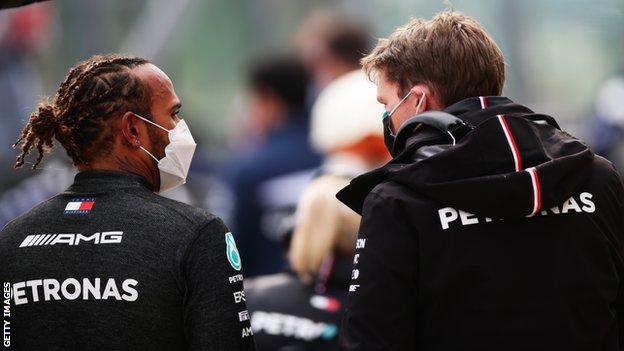 In the break while the track was cleared, Hamilton knew he would be ninth at the restart on a track on which overtaking is notoriously difficult. He crouched down in the pit lane with his head in his hands.

Shortly afterwards, he was joined by Mercedes chief strategist James Vowles, who put his arm around him as they walked down the pit lane and gave him a pep talk.

Forget about it, Vowles told Hamilton. You can still get on to the podium.

The car repaired, Hamilton went about reclaiming lost ground like a man possessed at the restart. Second place was just reward, even if he knew he had got away with his error.

"I don't make too many mistakes," Hamilton said, "and it was gutting to be in that position but I honestly feel those things happen for a reason.

"I was sitting there looking at the barrier and I refused to believe that race was done. I could have turned the car off and got out but I'm grateful I didn't."

Who has the best car?

Without the red flag, Hamilton would have struggled to score any points at all. But once the break came, he made the most of it.

"The recovery drive was really brilliant," Mercedes F1 boss Toto Wolff said. "It is a 10 out of 10."

Hamilton said: "Without doubt, getting back to second and getting those points will be very valuable because if I had lost 25 points today it would have been hard to recover, especially based on the fact Red Bull is incredibly fast.

"They were faster in qualifying trim but also in race trim, it appears. We have a real close battle and we love the fact it is close battle. And it was great to see McLaren back up there after such a long time, and great to see Ferrari looking strong. There are going to be a lot of exciting races ahead."

Two races in, it is impossible to make a judgement as to which is the quickest car.

Hamilton and Wolff insist it is the Red Bull. Verstappen was on pole by nearly 0.4 seconds in Bahrain, and would have been again in Imola by at least 0.25secs, Wolff said, had he not run wide on his final qualifying lap.

Mercedes have clearly made progress with their car since the first race – it looked a lot more settled and drivable than in Bahrain, where it was nervous and twitchy. But Wolff insisted there was still work to do: "We are struggling to understand it but we still don't have a car and power unit that can match the Red Bull-Honda."

"Lewis rode his luck but on the same spec of tyre in clean air they look very competitive. He had DRS for his fastest lap, which is a free 0.4secs. But it is very close and about making the most of the car.

"We are starting to see a pattern that the cars and drivers are very tight between Lewis and Max and it is marginal gains here and there.

"We see they have very good range and (tyre) degradation and definitely the fact we have managed to bounce back after losing Bahrain is fantastic – selfishly for us but also for F1. They are crying out for a great rivalry between these two drivers and the sport will benefit from that."