Being bisexual 'didn't even cross my mind as an option'

"I didn't know a lot about bisexuality, it wasn't a thing. It was maybe a transition – for people who were afraid to say they were gay."

In the 101-year history of American football's NFL, no openly gay or bisexual athlete has ever featured in a regular-season game.

Ryan Russell is on a mission to change that.

The 29-year-old defensive end is a free agent following spells with the Dallas Cowboys, Tampa Bay Buccaneers and Buffalo Bills.

While sidelined with a shoulder injury in 2019, Russell decided to come out as bisexual.external-link

"It's scary, daunting and paralysing but I've got to keep moving forward – I want to be the first, but never the last," Russell told BBC Sport.

Russell says he's fit and ready to play again. Yet for as long as he can remember, he's been fighting an internal battle over his sexuality – one where self-doubt, societal attitudes and media coverage have kept him from "living the truth".

'I could only think of things to lose'

Russell grew up in Texas, where in his words "football and religion" were all that mattered.

His talents for American football were spotted by a coach at high school, where performances later secured him a scholarship at Purdue University in Indiana. It was during his time on campus that Russell had his first relationship with a man.

The 6ft 5in footballer said any uncertainty he had about his own sexuality was put on hold when he was drafted by the Cowboys in 2015.

He added: "The NFL calls and I get that call from the Cowboys, and I thought: 'Well, if I was turning gay, I need to stop now.'"

With no openly gay players in the league, Russell said he wasn't ready at the time to be the first because of the uncertainty of what could transpire. He knew that joining the league was an opportunity to change not only his life, but his family's as well.

He also wondered if coming out would be a premature action.

His logic was that if he ended up marrying a woman, why would the world have needed to know he was also attracted to men?

So, on starting life in the NFL, Russell decided to keep his sexuality secret. He could only think of things to lose by revealing he was bisexual.

He said: "I was finally in a place where I could provide for my mother, who had sacrificed so much for me.

"It felt almost selfish to come out. I thought, 'I don't want to be a distraction to my team, I don't want to jeopardise our success on the field, and also my personal success or financial status'.

"Now I realise none of those reasons are worth my own health and wellbeing."

'There's a lot of bi-erasure in our culture' 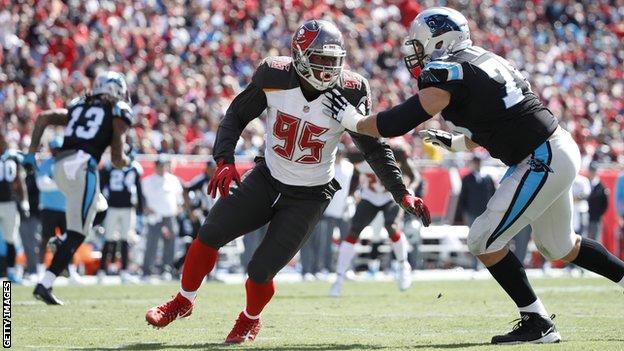 Only a handful of family and close friends knew Russell's secret. He kept it from all the players and coaches he'd worked with.

"In the locker room, we talk about everything that comes with money – fast cars, women," Russell said.

"And if team-mates asked about a girlfriend, I'd say, 'I'm just not dating at the minute,' without going into details."

The turning point for him came during rehab from a shoulder injury he sustained in 2017 while playing for the Buccaneers. With his recovery taking almost 18 months, he missed the entire 2018 season, during which he was signed and released by the Bills.

"My whole identity was based around football – and I didn't know if I'd play again," he said.

"I needed to find happiness – both in who I am and outside of what I do for work.

"That started me on my journey of self-love and self-acceptance."

Russell said he acknowledges attitudes towards LGBT+ individuals are changing – both within sport and society.

However, he said part of his reluctance to come out was because of the view of bisexuality among certain parts of the LGBT+ community. Some people within that community believe being bisexual is just a route to being gay or lesbian.external-link

"There's a lot of bi-erasure in our culture, and in media," he said, adding that he received negative comments after coming out.

He said it was "a little disheartening at first" to experience that prejudice, especially when it came from other black men.

"Obviously, that's wrong," he said. "If you've been oppressed, then you understand how that feels. And when you do it, you should understand you're doing it to another group or another person."

'There's so much misogyny, which I believe is the root of homophobia' 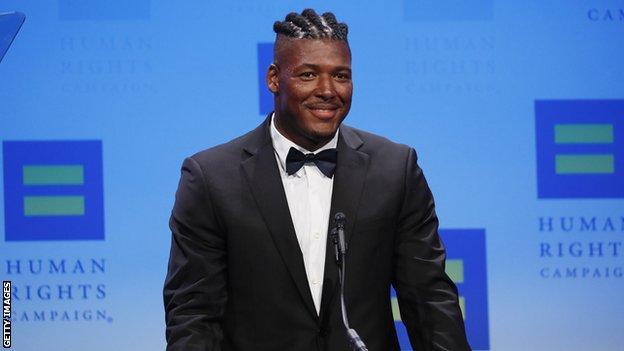 Russell believes tackling homophobia is a battle that can be won. But he understands other areas of discrimination that need to be addressed too – racism, sexism, religious hate – all are linked.

He believes he's in a unique position to play an active role. Bisexual. Black. And in an interracial relationship.

Russell said that shows the "beauty" of intersectionality – a way of analysing how different forms of marginalisation like gender, race and sexuality overlap.

He said he's had contract offers outside of the NFL but he's still hopeful of returning to the sport's elite level.

Russell said he if doesn't become the first openly gay or bisexual player to feature in the NFL, the first to do so could be someone who is already out when drafted into the league.

Michael Sam, who came out as gay while in college in 2014 before he was drafted by the St Louis Rams, was close to being the first.

But Sam only featured in pre-season or practice squad games for both the Rams and Dallas Cowboys.

Russell, who says he was inspired by Sam, believes education from a young age would help make his intended feat a reality.

He said: "It starts young. There's so much misogyny, which I believe is the root of homophobia. A little boy is told, 'You throw like a girl' or 'Men don't cry'.

"These comments are so negative and so harmful, really hateful, corrupt and twisted.

"People have been conditioned to say this to our youth. You don't know what a kid is going through in their personal life.

"And before they even get a chance for honest and genuine exploration of who they are, you're setting up roadblocks."

Russell hopes he can be an example to follow.

"I want everyone's coming out to feel as joyous as mine did," he said.

"And at the heart of everything, sports or not, that is the goal. Because no young kid should be walking around thinking they don't deserve love and happiness."