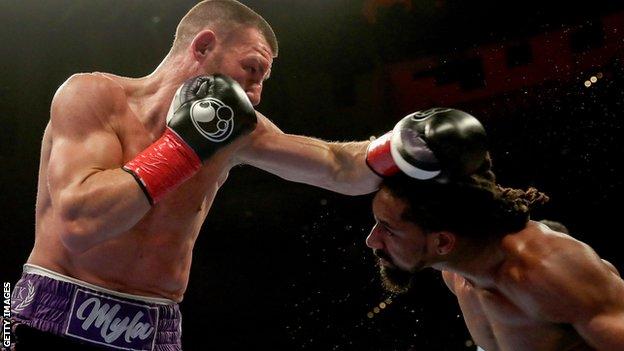 Welshman Williams, 28, was beaten on a unanimous points decision in Hollywood, Florida after being knocked down in round two.

Having pushed undefeated champion Andrade all the way, Williams says he can "stay at world level".

"I don't feel like I am going to take too much of a step back now," he said.

"I believe Demetrius is probably the best of the champions other than probably Canelo (Alvarez).

"I have to give him credit. I know I gave him a bit of stick in the build-up but I have got nothing but respect for him – he's quality."

Mandatory challenger Williams was the underdog against Andrade, 31, who now boasts an unblemished record of 30 wins and no defeats.

Andrade made clear in the build-up to the fight that he was unimpressed with the quality of his opponent, but Williams made the American work to retain his title.

"I know I'm tough. Everybody else knows I'm tough and I can take a good shot," Williams added.

"When I went down I just thought at the end of the day I have taken a clean shot here, I've taken the best shot he's got and it didn't keep me down, so I have got nothing to fear.

"Demetrius is a very good fighter. He is better than I thought to be honest with you – he is more slippery than he appears on TV.

"I couldn't really get going in terms of landing shots and getting my combinations off because I'd hit him once – I hurt him a couple of times I feel – but he was gone before I knew it and I couldn't capitalise on it."