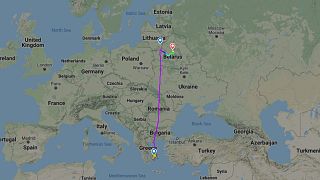 Belarus’ airspace should be deemed “completely unsafe for any commercial flight,” Lithuania’s foreign minister said Sunday after a Belarusian activist was detained in Minsk where his plane was grounded, after a bomb threat.

Roman Pratasevich, 26, is a founder of a messaging app channel in Belarus, that has been a key information conduit for opponents of Belarus’ authoritarian president.

The Ryanair flight FR4978 he was on from Athens to Vilnius in Lithuania, was diverted to Belarus.

Germany’s Secretary of State for the Foreign Office Miguel Berger said “We need an immediate explanation by the Government of Belarus on the diversion of a Ryan Air flight within the EU to Minsk and the alleged detention of a journalist.”

The presidential press service said that Belarus President Alexander Lukashenko personally ordered a MiG-29 fighter jet accompany the Ryanair plane to the Minsk airport. It said a bomb threat was received while the plane was over Belarusian territory; officials later said no explosives were found on board. There was no immediate comment from Ryanair.

Last November, the Belarusian security services (KGB) placed Pratasevich on the list of “individuals involved in terrorist activities”. He was a cofounder of the Nexta Telegram channel that’s played a leading role in the wave of protests in Belarus against the 2020 re-election of President Lukashenko, who has held the position since 1994.

The protest movement following the August 2020 presidential election ruled fraudulent by the opposition and western countries gathered tens of thousands of people in Minsk and other cities, a huge mobilization for a country of 9.5 million inhabitants.

But the protests gradually faltered in the face of mass arrests and police violence that left at least four people dead, ongoing judicial harassment and heavy prison sentences imposed on activists and journalists.

Pratasevich, who had fled the country for Poland, faces charges that could carry a prison sentence of up to 15 years.

“It is absolutely obvious that this is an operation by the special services to hijack an aircraft in order to detain activist and blogger Raman Pratasevich,” she said in a statement. “Not a single person who flies over Belarus can be sure of his safety.”