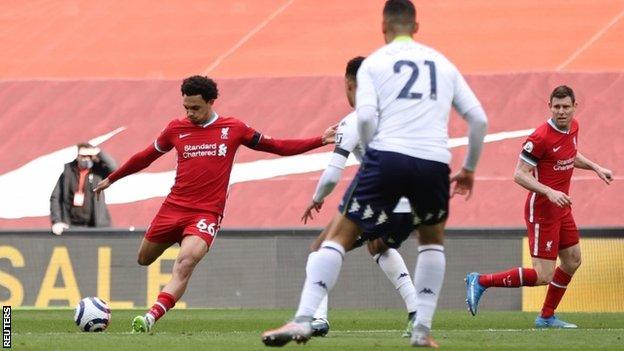 Trent Alexander-Arnold scored an injury-time winner as Liverpool came from behind to beat Aston Villa and end a run of six consecutive defeats at Anfield.

Ollie Watkins – who scored a hat-trick in Villa's 7-2 win in the reverse game – fired the visitors ahead with a shot which squirmed through Alisson.

Liverpool were denied an equaliser by an extremely tight video assistant referee offside decision. Roberto Firmino fired home from close range but a long VAR review ruled that Diogo Jota was just offside in the build-up.

They did eventually equalise when Mohamed Salah headed into an empty net after Emiliano Martinez parried Andy Robertson's cross.

That was their first goal in open play at Anfield since 27 December – a run of 765 minutes and 132 shots since Sadio Mane scored against West Brom. They netted one penalty at their home ground in that time.

Villa went close to a winner as Trezeguet's spinning effort hit the post.

But the Reds kept persisting and Alexander-Arnold curled home from the edge of the box after Villa failed to clear the ball.

Liverpool move up to fourth place, above West Ham on goal difference, with Villa staying in 10th.

Alexander-Arnold's first home goal in the league since July 2020 ended not only a six-game losing run at Anfield, but also a run of eight games without a win at home – the second worst top-flight record in their history.

The comeback win means another VAR offside invisible to the naked eye might avoid the headlines.

Alexander-Arnold found Jota with a long pass over the top as Matty Cash failed to clear. Jota picked out Mohamed Salah, who passed to Andy Robertson. His shot was blocked and landed to Firmino, who scored.

But a long VAR check ruled that Cash did not touch the ball and Jota was just offside.

At that stage it felt Liverpool's luck was out but they ended up rediscovering their winning touch.

Salah headed in and then Alexander-Arnold pounced after Thiago's shot was well saved by Emiliano Martinez before the ball reached him.

Liverpool had plenty of chances either side of their goals – 23 shots in total – with Salah rolling a shot wide after a Tyrone Mings error one of the more notable misses.

The win will give Liverpool extra confidence going into Wednesday's Champions League quarter-final second leg against Real Madrid at Anfield. They lost 3-1 in Spain.

Is Europe gone for Villa now?

Liverpool 2-1 Aston Villa: Dean Smith says it was 'disappointing to concede so late'

Villa were hoping to complete a double over Liverpool, having stunned them 7-2 earlier in the season in one of the Premier League's most famous scorelines.

And things were looking good when John McGinn found Watkins, who cut inside Ozan Kabak before shooting straight at Alisson, who should have done better but let the ball in.

That made Watkins the first player to score four goals against Liverpool in a single Premier League season since Andrey Arshavin for Arsenal in 2008-09.

After the break and Liverpool's equaliser they struggled to create too many clear-cut chances, except for Trezeguet's effort off the woodwork from Watkins' pass.

Their failure to hold on to a point means they are now five points below Tottenham Hotspur in seventh place, which is the lowest position that could be a European place.

Liverpool have won a Premier League game with a 90th-minute winning goal for the 37th time, 12 more than any other side. Aston Villa have lost 22 Premier League games in such a manner. Only Spurs (23) have lost more in the competition's history. Mohamed Salah's equaliser ended Liverpool's run of 12 hours and 44 minutes without a goal from open play at Anfield in the Premier League.Salah has scored 28 goals in all competitions this season, his best return in a campaign for Liverpool since 2017-18 (44). No player has scored more goals against reigning Premier League champions in a single season than Ollie Watkins vs Liverpool this season (four – also Sergio Aguero v Chelsea in 2015-16 and Harry Kane v Leicester in 2016-17).

Liverpool host Real Madrid on Wednesday. The Reds play twice before Villa's next game – visiting Leeds the following Monday in the league.

Villa do not play another game for 11 days. They host Manchester City on Wednesday, 21 April.