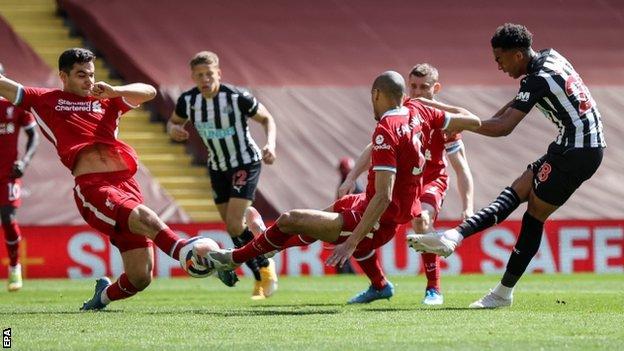 How damaging could Newcastle's late equaliser be for Liverpool's hopes?

"If you deserve, you deserve it. I didn't see us today playing like we deserve Champions League next year."

Will Liverpool, runaway Premier League champions last year and Champions League winners in 2019, really miss out on a place in the competition altogether next season?

Joe Willock's 95th-minute equaliser for Newcastle at Anfield in a 1-1 draw made it four dropped points in a week for Jurgen Klopp's side, with the manager questioning whether they merit another seat at the top table.

The Reds lie sixth, a point behind both Chelsea and West Ham, who meet at London Stadium later on Saturday.

"We have another five games and we will see. We learn or we don't play Champions League, that's it," said Klopp.

You're supposed to be at home… 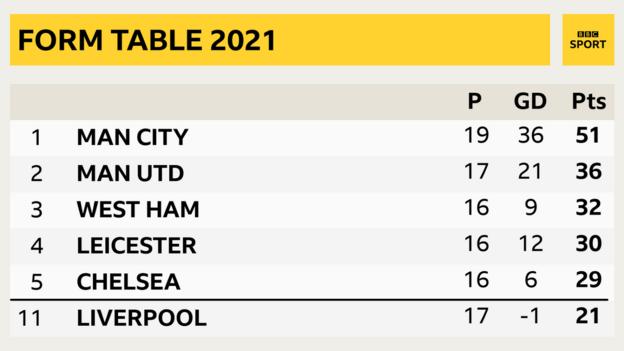 Liverpool have a worse record in the Premier League than Brighton since the turn of the year. (Correct before the West Ham v Chelsea match.)

Liverpool's 30-year wait for a title came to an end this time last year, Klopp's side crushing all-comers at Anfield as they won 18 of 19 home games – the sole blemish a draw with Burnley.

They finished 18 points ahead of Manchester City last season but have taken 30 points fewer than Pep Guardiola's side in this calendar year alone.

Matching their 2019-20 form was an unlikely task but Liverpool's drop-off has been alarming, especially at home.

"In these games [against lower sides] we have had chances like madness and we didn't use them. Who is to blame for that apart from us? Nobody," said Klopp after the Newcastle draw.

"In the moment, frustration is obviously at 150% and I will find a way back on track but for the moment it's so harsh. It's tough to take but we have to take it."

Liverpool are not alone in struggling at home – the absence of fans perhaps playing a part – with Leicester, Arsenal and Tottenham all dropping more points than might be expected.

But the Reds have lost six times at Anfield in the league this season, as many as Brighton, Burnley and Newcastle, and they have collected an even split of 27 points in home and away games this year.

Willock's goal should have come as no surprise, given Liverpool have kept just three home clean sheets in the Premier League this season, conceding at least once in each of their past eight games at Anfield in the competition.

'This club is a Champions League team'

Left-back Andrew Robertson was in no mood to dismiss his side's chances of qualifying – but admitted that even winning every remaining game might not be enough.

Liverpool are at Old Trafford next to take on old rivals Manchester United in the most high-profile of their remaining fixtures.

"This club is a Champions League team," he said.

"We got to the quarters-finals this year – and we are still disappointed with that – and two finals in the space of four years and won the Premier League comfortably last year, so to not have Champions League football next year would deflate the whole club, of course it would.

"This club is based on fighting to the end and that's what we need to do. Even if we win the next five games it might still not be enough but we need to put that pressure on the teams.

"There have just been too many games this season where we've dropped too many points.

"Against the bottom six, if you've only picked five points up at home then unfortunately you are going to fall short of your target."

Are you a pub quiz whizz? Then test your knowledge of the OscarsNo Passion, No Point is back: Eddie Hearn chats to the Rio Ferdinand about his next career movecommentsView Comments1153

To use comments you will need to have JavaScript enabled.
1153 commentsShowLatestOldestHighest RatedMost RepliedB

Liverpool have been mediocre, at best, this season.

You get what you earn, unless you’re Perez that is 😂2235Removed commentMore replies (28)downM

If Leicester and the Hammers end up top 4, I think many a neutral would see that as refreshing.1957Removed commentMore replies (20)downA

17:32 24 AprPointless article really – as others have already said, if they get in, they deserve a place, if they don’t, they don’t. Of course, you really should have to be a champion of a league to get in the CL, but that’s another issue consigned to history by greedly clubs and tv money.1718T

18:41 24 Aprto ade65"Pointless article really – as others have already said, if they get in, they deserve a place, if they don’t, they don’t. Of course, you really should have to be a champion of a league to get in the CL, but that’s another issue consigned to history by greedly clubs and tv money."The Gorg replied: They’ve written it for their primary school demographic.642More replies (7)downL

You get the idea!

They have got, and will proceed to get , what they “deserve” on and off the pitch just like every other club.

The BBC have excelled themselves with this one……..!678L

18:54 24 Aprto LFC_Dog"If they finish top four yes. If not, then no."Ian L replied: That’s right. What I can’t believe is that 4 people so far have given this the thumbs down. Presumably supporters of the ESL.205S

17:41 24 AprIt maybe a dumb question at the moment but come 2024/25 they’ll be in the Champions league because of their co-efficient rating even if they get relegated – joke.659S

19:27 24 Aprto skank of the south"It maybe a dumb question at the moment but come 2024/25 they’ll be in the Champions league because of their co-efficient rating even if they get relegated – joke."Stulad replied: I completely disagree with the new format so here’s hoping they take a couple of seasons off before then and we won’t have that fact tarnishing our league170More replies (9)downC

17:34 24 AprAnother day of missed chances for Liverpool, but if you don’t take them you get the result you have earned. Flawed defence too.
On current form they are not top four.461M

19:33 24 Aprto Cynical Sid"Another day of missed chances for Liverpool, but if you don’t take them you get the result you have earned. Flawed defence too. On current form they are not top four."mr grumpy in Blackpool replied: They need to strengthen their Squad as their main men,VvD,Salah,Henderson are all approaching 30 and cannot sustain the demands of Klopp’s 100mph style.They have bought players from past sales (Coutinho Sterling Torres) so where in the light of covid will new money come from.They may find the glory days have gone for now like Klopp166More replies (2)downR

19:41 24 Aprto DavidHankey"How can folk reckon L’pool “deserve” a top 4 spot!! They are mediocre at best and will finish nearer to mid-table, accept it!!"mr grumpy in Blackpool replied: I don’t care for LFC ,but come on, they are a class above West Ham,Everton or Leicester.Last year they crushed everyone.Just because of one bad season you cannot judge so harshly.Now if it continues next year you may have a point2557More replies (8)downU

17:39 24 AprWhat is the point in debating this? If they they don’t get the results…they don’t qualify! And if they don’t qualify – they certainly didn’t deserve a place. Geeeez rocket science it ain’t! I think Saints and the other 14 clubs that didn’t try to jump ship should go into a hat! 🤣🤣😉438M

19:27 24 Aprto UptheSaints"What is the point in debating this? If they they don’t get the results…they don’t qualify! And if they don’t qualify – they certainly didn’t deserve a place. Geeeez rocket science it ain’t! I think Saints and the other 14 clubs that didn’t try to jump ship should go into a hat! 🤣🤣😉"mr grumpy in Blackpool replied: Southampton ? Are you kidding? Have you watched them play? Had they not had such a great start to the season they would ,based on current form,be below West Brom.They look relegation fodder next year197More replies (1)downR

01:20to Raedwulf"Do Liverpool deserve CL place next year?Current position: 6th.Answer: No.End of season? We’ll see. What an utterly stupid & pointless article!"cytrax replied: I think they purposefully gaslight the readers. It’s incredibly stupid that someone sat there to write this tripe of an article.110K

18:14 24 Aprto keith"I get so much JOY out of seeing Liverpool drop points"City are the saviours of football replied: Not only you Keith.

The whole country is having a party4922More replies (13)downS

18:12 24 AprNo one deserves it. You either get the results that put you there or you don’t. That’s football, that’s sport, that’s why fans can dream, it’s why we each grow up with hope in our club. It’s what Florentino and John don’t understand.211M