There were tears at full-time, an emotional signal up to the sky and a mass of red bodies on top of Alisson in what Jurgen Klopp described as a "special moment".

It is not every day you see a goalkeeper score a 95th-minute winner. In fact, in Liverpool's 129-year history, no goalkeeper has ever scored in a competitive match for the club.

So when Alisson nodded in a dramatic winner for Liverpool against West Brom – in turn keeping their Champions League qualification hopes in their own hands – the celebrations were wild.

Alisson paid tribute to his late father immediately afterwards in an emotional interview.

"I hope he was here to see it, I'm sure he is celebrating with God at his side," said the Brazilian.

And he joked: "Hopefully I don't have to come up too many times to score goals!" 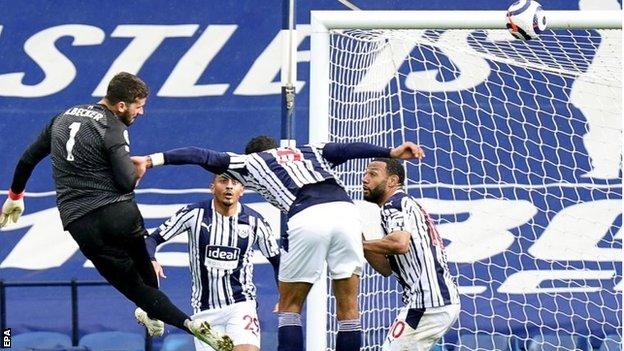 Alisson became the sixth goalkeeper to score a Premier League goal – and the first to do so with a header.

"I think it's one of the best goals I have scored," he told Sky Sports, before being reminded it was actually his only goal.

Alisson's father, Jose Agostinho Becker, died aged 57 in Brazil in February with local police saying he had drowned at a dam near his holiday home in Lavras do Sul.

"I'm too emotional, this last month for everything that has happened with me and my family, but football is my life, I played since I can remember with my father," said Alisson.

"Sometimes you are fighting and things aren't happening. I'm really happy to help them because we fight together and have a strong goal to achieve the Champions League, because we have won it once and everything starts with qualification.

'Winning that way is really special' 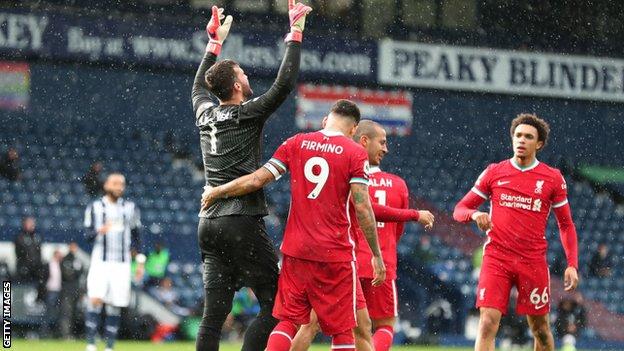 Liverpool have had a difficult season after they were unable to defend their Premier League title and now face a nervous wait to see if they can qualify for the Champions League.

The 2-1 victory over West Brom moves them to within a point of fourth-placed Chelsea. Until Alisson's dramatic late intervention, their top-four hopes appeared to be slipping away.

"It was spectacular and a good game. That is so far the highlight [of the season]. I hope we have time for another highlight. Winning that way is really special, I couldn't be happier."

Klopp, who also lost his mother this season, said it was "the best goal I've ever seen scored by a goalkeeper" and described Alisson's thumping header as a "worldie".

"[Alisson's] our player, our boy and our brother," he added. "When he is suffering, we are all suffering – it's hard in these moments.

"There are more important things than football but when football can deliver moments like this for him, and all the boys, and our fans, then football is the best thing for a few seconds than anything else out there."

'He's a beloved team-mate for all of us'

In further testament to the solidarity among the Liverpool squad, Reds midfielder Thiago paid tribute to his "beloved" team-mate.

The Brazilian has played with some superb strikers in his career, including the current Best Fifa Men's Player Robert Lewandowski, but feels any of them would have been proud to score Alisson's header.

"We have to watch and re-watch that goal because it's so emotional for us, not just for our Champions League chances but for Ali with what we has been through this year, so we are so happy for him," Thiago told Sky Sports.

"He's a beloved team-mate for all of us. He has faced it with a strength I have never seen in my life.

"I've been in many great teams with many great forwards but I've never seen the quality and timing of the header from Ali, the cross was amazing as well, everything was great."

Ali Plumb's duvet day films: Check out the best movies for a Sunday and where to watch themLooking for a new phone?: BBC Scotland look at the research you should do before you trade up
Source