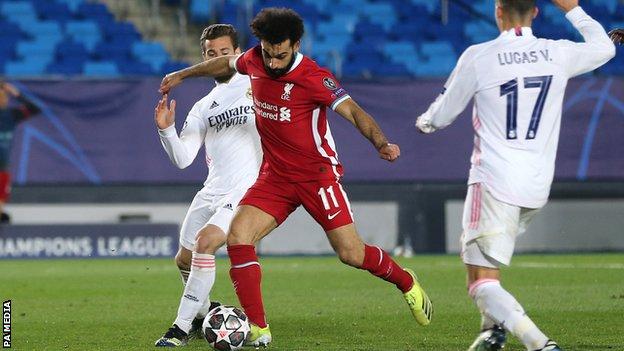 Mohamed Salah scored an away goal for Liverpool in the first leg, but his side lost 3-1 in Spain

Liverpool boss Jurgen Klopp says his side have to be "their best selves" to overturn a two-goal deficit in their Champions League quarter-final second leg against Real Madrid on Wednesday.

Real won 3-1 in Spain last week, meaning Liverpool need to win by at least two goals at Anfield to advance.

"When you're 3-1 down, it looks like we're already out so we have nothing to lose and will try," said Klopp.

"To beat Real Madrid you have to defend at your highest level and also create."

Liverpool have reached two Champions League finals under Klopp, losing to Real in 2017-18 before beating Tottenham in 2018-19.

But the Reds, sixth in the Premier League and unable to retain their domestic title, have it all to do after two Vinicius goals and another from Marco Asensio helped Real to a first-leg success.

"They were better than us and we weren't as good as we should or could have been," added Klopp.

"Their first goal was a genius long ball between two defenders but the other two goals we just didn't defend well enough.

"We have to bring ourselves in a mood and start believing again. If we can see it's possible then we have a chance but it's still incredibly difficult."

Two seasons ago in the semi-finals Liverpool lost 3-0 in the first leg away at Barcelona before winning 4-0 at Anfield. In 2016 in a Europa League quarter-final, the Reds trailed 4-2 on aggregate with 24 minutes to go against Borussia Dortmund but recovered to progress.

"You don't get a comeback because you had one in the past," added the German.

"We cannot just take comebacks for granted, especially not without a crowd in the stadium. We have to create our own atmosphere for this game."

The winners of the tie will play Chelsea in the semi-finals after Thomas Tuchel's side beat Porto 2-1 on aggregate, despite losing 1-0 in the second leg on Tuesday.

Defender Lucas Vazquez suffered a knee injury in Real's 2-1 win over Barcelona at the weekend and has not travelled with the squad. Ex-Chelsea forward Eden Hazard is out with a groin injury, defender Dani Carvajal is yet to return to full training and central defender Raphael Varane is self isolating after a positive Covid-19 test.

Real captain Sergio Ramos was not included in the squad as he had not recovered from a calf injury that kept him out of the first leg. On Tuesday, the club also announced Ramos had also tested positive for Covid-19.

Real boss Zinedine Zidane said: "It's true that these are very demanding games but we can play at the limits and have to give more.

"Some players have been injured and we've had a lot of injuries this season but we have to continue and find different ways.

"We need to play another great game to get through to the semi-final and we're going to try and win this game. We will need to compete well and attack as a unit and we're ready for this return leg."

In 13 previous knockout ties in European competition where they have lost the first leg by two or more goals, Liverpool have progressed twice. The most recent example was overturning a 0-3 first leg deficit against Barcelona en route to winning the 2018-19 Champions League.Mohamed Salah has scored in each of his last four Champions League appearances – the only Liverpool player to score in five consecutive European Cup/Champions League games is Steven Gerrard, who did so in 2007-08.Five of Liverpool's 11 home defeats in the Champions League have come against Spanish opposition, while Real Madrid could become the second side to win away against the Reds twice in the competition, after Barcelona. 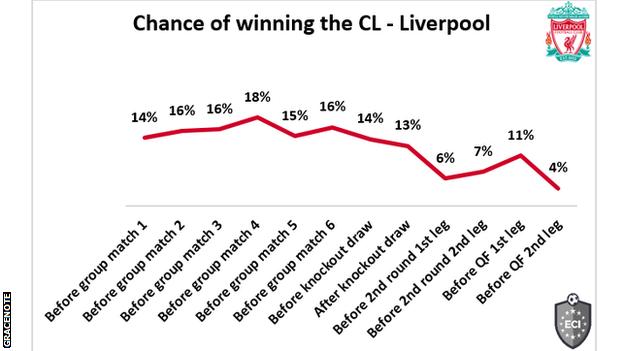 Simon Gleave, head of sports analysis, Nielsen's Gracenote, said: "Liverpool's defeat in Madrid makes them outsiders to progress to the last four so their chance of winning the Champions League has dropped to a season-low 4% according to the Euro Club Index.external-link The Reds are given just 15% chance of knocking Real Madrid out after losing the first leg of this tie 3-1.