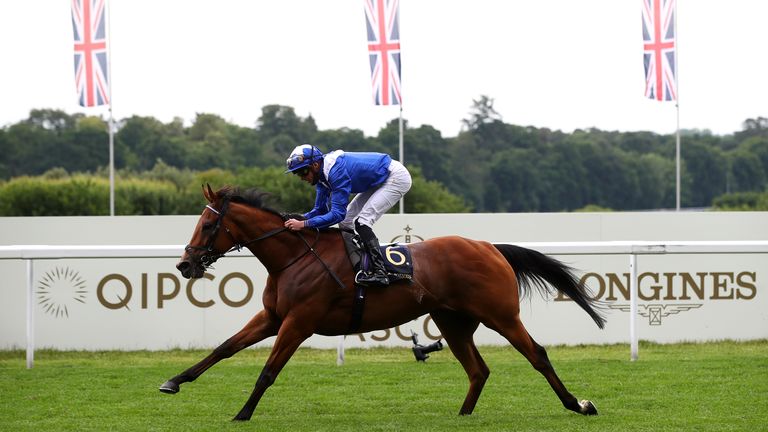 Frankie Dettori admits Lord North’s lengthy lay-off is a concern in the Dubai Turf, but still expects the British raider to put his best foot forward at Meydan.

The five-year-old has been off the track since finishing a creditable fourth when trying a mile-and-a-half for the first time at the Breeders’ Cup at Keeneland back in November.

Lord North, who landed the Prince of Wales’s Stakes for John Gosden at Royal Ascot last year, switches back in distance for Saturday’s Group One – but with the likes of David O’Meara’s Jebel Hatta winner Lord Glitters and the Godolphin pair of Al Suhail and Land Of Legends having had prep runs, Dettori thinks his 140-day absence could be a worry.

He told his Sporting Index blog: “He was by no means disgraced in finishing fourth in the Breeders’ Cup Turf over 12 furlongs, and he now steps back to nine furlongs – which is the same distance he won the Cambridgeshire over in 2019.

“The concern is that he’s had almost five months off the track, but when I rode him on Thursday morning he felt in good shape.

“John (Gosden) is the best, and he showed with Mishriff in the Saudi Cup that he can get one ready for a big race like this despite the break.

“He’s the highest-rated horse in the race, so obviously goes there with a big chance – although horses like Lord Glitters, Al Suhail and Land Of Legends have all been running well recently and have to be respected.”

Lord North was due to run at Meydan last March before the Dubai World Cup card was called off because of the escalating Covid-19 pandemic.

Thady Gosden, who now trains in partnership with his father, added: “He actually came out last year, but unfortunately because of Covid the World Cup had to be cancelled. He came out, had a nice little holiday for three days and went back.

“He r an well at Haydock at the start of the year. He just didn’t handle the heavy ground at Ascot on Champions Day, but he’s got solid enough form and we’ll see.

“His mind is still on it, he still loves racing, so hopefully he’ll continue (to improve) and he looks well too.”

New Treasure represents the Dettori-Gosden axis in the UAE Derby, but he has a length and three-quarters to find with Pink Kamehameha on their recent Saudi Derby meeting.

Gosden said: “He ran well (in Riyadh), he’s a different type of horse to Mishriff (who ran in last year’s Saudi Derby) – different physically, but he ran well there. It probably wasn’t as competitive as the UAE Derby by any stretch of the imagination, but he comes here in good form.”

Dettori teams up with the Charlie Hills-trained Equilateral once again in the Al Quoz Sprint.

He rode the six-year-old victory on his initial Meydan run in January, but Andrea Atzeni was aboard when he won a Group two last time out.

Dettori takes over again in this six-furlong heat, but he is well aware Space Blues will take all the beating as Charlie Appleby’s charge seeks a fifth win on the bounce, encompassing last year’s Prix Maurice de Gheest.

He said: “He has a bit to find on ratings with Space Blues, but there’s no doubt he enjoys his time out in Dubai.

“Meydan is a very flat, slick track – and that suits him, because he likes to free-wheel along.

“Space Blues obviously stands out, but he’s going back in distance, so that has to be a question mark.

“All of Equilateral’s best form is over five furlongs, but given the nature of the track I’d be hopeful he can handle the step up in trip.”

Appleby hopes the fact Space Blues is now the “finished article” will offset the change in trip.

“It is a different ball game for Space Blues, taking on the real sprinters over a straight six furlongs, but we feel that he is the horse to beat,” Appleby told www.godolphin.com.

“He was fresh and keen when he ran over this course and distance last year and ended up doing everything the wrong way round. He is a five-year-old now, and the finished article.”