“Previously you could say there were two or three teams that would win the league, I think now there are probably about six who think we fancy this,” Sara Bayman on top-four challenge. Watch every game of the Vitality Superleague live on the Sky Sports YouTube channel 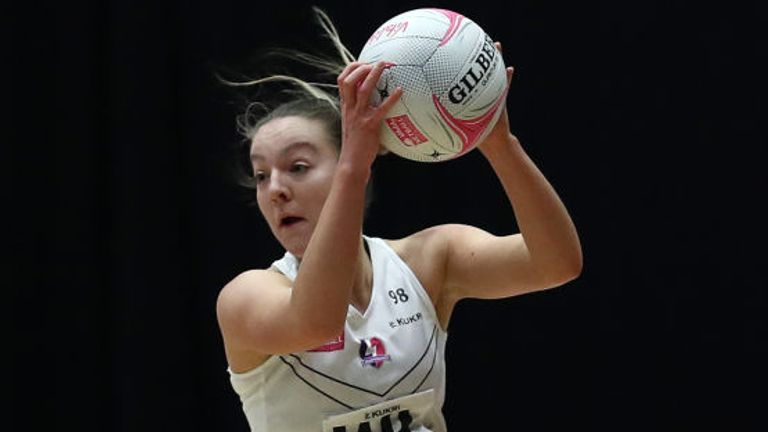 Hannah Williams of Loughborough Lightning in action against Bath

Loughborough head coach Sara Bayman is relishing a showdown with Midlands rivals Wasps as part of what she believes can be the Vitality Superleague’s most competitive season yet.

A bumper Opening Weekend to the 2021 season concludes on Monday night with a double-header live on Sky Sports Mix and the Sky Sports YouTube channel and for Lightning, they are back on court 24 hours after defeat to Team Bath.

Bayman’s squad pushed one of the favourites for the title all the way, eventually losing out 48-44, and the Lightning head coach is desperate to get three points on the board early with their own top-four ambitions uppermost in their thoughts.

“It’s important to get a quick start, get some points on the board and put some pressure on the other teams rather than face pressure ourselves,” she tells Sky Sports.

“It is crucial from the sport that we have a competitive league, people and fans want to watch games that they don’t know the outcome of and previously that’s where the league has had a bit of a gulf between the top teams and the bottom teams.

“This season, I don’t expect that to be there and covid protocols, double game weekends might also see a levelling out.

Seven of the 11 teams have so far racked up victories across the first three days at the purpose-built court in Wakefield and Lightning will have to overcome a Wasps team that eased past Severn Stars on Sunday night.

Defeat will mean another slow start for a Lightning team who have a habit of making life hard for themselves. Two defeats from their opening three games in the curtailed 2020 season followed a 2019 seas on where they lost three of their opening five games.

In their defence those defeats have tended to come against top-four rivals with Team Bath, Manchester Thunder and Saracens Mavericks among the teams to get the better of them.

But with points crucial in a league that will feature double header game weekends and covid protocols, meaning squad strength is more important than ever, captain Nat Panagarry knows a repeat won’t be acceptable.

“We seem to have always struggled with our start and it’s always been something we have discussed,” she says.

“It has taken us too long to hit the ground running and get the intensity required but I think the last few years I have been here this feels like the best pre-season we have had.

“I have confidence and faith in the team after a good week where we have spoken about the intensity and training on the eve of the season we were all going for it, we didn’t know our starting seven.”

Fortunately for Bayman, Panagarry and the rest of the Lightning squad next up are perhaps their fiercest rivals to focus the mind. Loughborough and Wasps have met in two of the last three Grand Finals and local bragging rights will be up for grabs as well as three vital points.

Bayman believes it’s important for women’s sport and the Superleague season that rivalries and competitive action is on display in the first netball season that will see all the games made available to fans to watch.

“Those games that mean more and where you feel the heat of the battle are a bit more than just winning and losing so it’s always one to watch,” Bayman adds with a smile.

“In 2019 it was a dogfight [for the top four], we refused to lie down and when we needed wins against teams like Wasps and Thunder – we had the attitude ‘ let’s go get ’em’ and that will be the attitude we are going to have to take every week.

“Top four is going to be a real scrap and once we are there we can start worrying about semi-finals and then finals are one-off games and you look around the league and anyone could beat anyone.

“Previously you could say there were two or three teams that would win the league, I think now there are probably about six who think we fancy this.

“East-West Midlands is a rivalry that is there, previous finals have added a touch of spice to that rivalry and it is always satisfying, like the one-goal win in 2019 – it’s probably the highlight of the season for a lot of people.”

However more importantly is the job at hand. Loughborough have managed to keep their squad intact under Bayman for the last couple of seasons and this season have added England Roses star Beth Cobden after two years of injury heartache for the mid-courter.

While Bayman admits more than any year 2021 is a game-by-game, week-by-week season, the top four remains the ultimate target, while the final word is on that rivalry that she admits has lost a certain edge.

“It’s not as much fun now that Tamsin is not at Wasps, it doesn’t have the same edge of a week of texts beforehand!” she smiles.

“It’s a cliché but we will take it game-by-game because this season especially the games are coming thick and fast right from the very start and by the end of February we might have an idea of where we are and what we will have to do.”

Sky Sports is your home of netball. The Vitality Netball Superleague continues on Monday with back-to-back matches from 4.45pm on Sky Sports Mix. Viewers in the UK and Ireland can also watch on the Sky Sports YouTube channel.