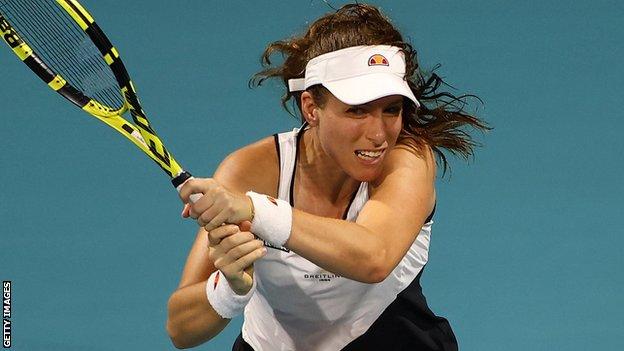 Johanna Konta has played just seven matches in 2021, winning three of them

British number one Johanna Konta began her clay-court campaign with victory over Yulia Putintseva in the first round of the Madrid Open.

Konta, seeded 15th at the event, beat Kazakhstan's Putintseva 6-4 6-2 for just her third victory of the year.

She will play either Anastasija Sevastova or Ana Bogdan next.

Konta, who has been managing a long-term knee problem, said there was a balancing act to be done between playing in tournaments and living in on-site bubbles.

"It's very different playing under these circumstances compared to what our old normal used to be," she said.

"For me, it's about managing where I feel like I'm able to really put myself out there to perform the best that I can."

Australia's world number one Ashleigh Barty claimed her 12th consecutive win on red clay with a 6-2 6-1 victory over Shelby Rogers of America.

However, fourth seed Elina Svitolina squandered six match points as she was stunned by Jil Teichmann of Switzerland.

Live scores, results and order of playAlerts: Get tennis news sent to your phoneSnooker-tastic!: The heroes and villains that helped snooker reach it's glory yearsHave an evening in with films on iPlayer: From action to romance, there's a movie for everyone
Source