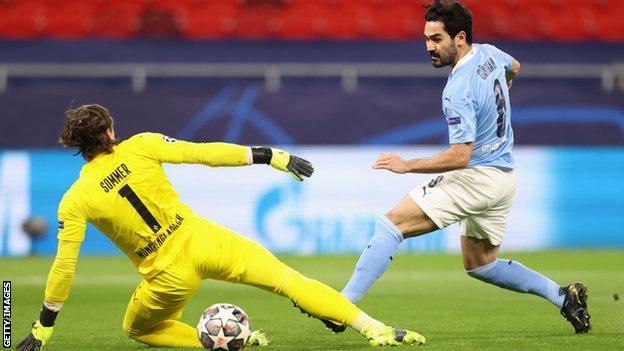 Manchester City moved into the Champions League quarter-finals for a fourth successive season by completing a comprehensive aggregate victory over Borussia Monchengladbach.

Leading 2-0 after the first leg, the Premier League leaders extended their overall advantage after only 12 minutes of the last-16 second-leg tie through Kevin de Bruyne's excellent 20-yard left-footed strike.

Both matches in this tie were played at the Puskas Arena in Budapest because of coronavirus restrictions.

The draw for the quarter-finals is at 11:00 GMT on Friday.

Manchester City v Borussia Monchengladbach as it happened, plus reaction and analysisWhen is Champions League quarter-finals draw and who is through?Football Daily podcast: Are Man City on track for the quadruple?

City remain on course for a quadruple

This win means City have only lost one of their past 32 matches and keeps them on course to become the first English team to win the quadruple of Premier League, Champions League, FA Cup and League Cup.

Before the match, defender Oleksandr Zinchenko said winning all four trophies was something City could achieve, before boss Pep Guardiola later played down their chances.

This victory, and the manner of it, again shows that this City side, 14 points clear at the top of the Premier League, in the quarter-finals of the FA Cup and the final of the Carabao Cup, will take some stopping.

Guardiola started this 'home' match in Hungary without a recognised centre forward with Gabriel Jesus and Sergio Aguero among the substitutes.

However, Monchengladbach were unable to cope with the movement, speed of passing, creativity and quality from City.

Foden had the first chance but flicked wide after Joao Cancelo's ball over the top, but City soon went ahead with De Bruyne's brilliant strike, which went in off the underside of the crossbar.

That was the 100th goal Guardiola's team had scored in all competitions this season and the 101st quickly followed. Foden collected the ball in his own half, ran at the Gladbach defence and produced a 'no look' pass to release Gundogan with the German scoring his 15th of the season.

De Bruyne had a further two chances to extend their lead, but had a 30-yard free-kick pushed over and curled another shot wide from the edge of the penalty area, with Riyad Mahrez also having an effort saved.

City have never won the European Cup or Champions League, with their best run coming five years ago when they lost in the semi-finals to eventual winners Real Madrid.

Guardiola won the Champions League twice when in charge of Barcelona and in his four full seasons at City, they have gone out in the quarter-finals three times and the last 16 once.

He has talked of "unfinished business" in the competition but will know there will be much tougher tasks to come than they faced against Monchengladbach, who are 10th in the Bundesliga and have lost all seven matches since boss Marco Rose announced he would be joining Borussia Dortmund at the end of the season.

City goalkeeper Ederson had to make a couple of saves, to keep out efforts from Breel Embolo and Marcus Thurman, but it was another impressive defensive performance as they kept their 26th clean sheet of the season.

The central defensive partnership of Ruben Dias and John Stones was again excellent, with Guardiola later saying the pair had made "an incredible step for the team" this season.

Stones, 26, has 34 England caps but has not featured for the Three Lions since a European Championship qualifier against Montenegro in November 2019.

He will be hoping his fine form earns him an England recall on Thursday when boss Gareth Southgate names his squad for the World Cup qualifiers against San Marino, Albania and Poland. 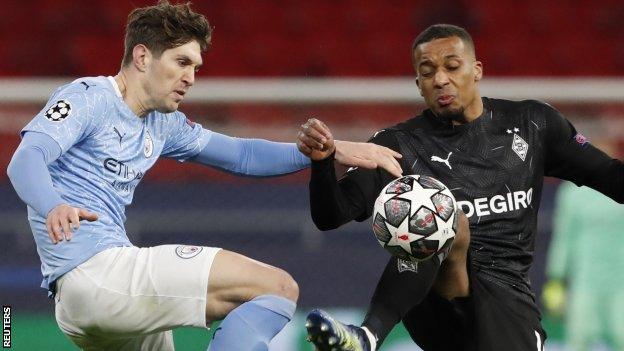 John Stones has played in 26 Manchester City games this season, compared with only 24 in the whole of the 2019-20 campaign

Another 100-goal season for City – the stats

Manchester City have won 24 of their past 25 matches in all competitions (lost one). Since a 1-1 draw with West Brom on 15 December, City's 24 wins are at least seven more than any other side has managed in all competitions in the top-five European leagues.Half of Borussia Monchengladbach's defeats (five of 10) in the Champions League have been against Manchester City. City have now scored more than 100 goals in each of their past eight seasons in all competitions, with only Manchester United (nine in a row between 2004-05 and 2012-13) having a longer run of consecutive seasons scoring 100+ goals among top-flight English teams.City are only the third team in Champions League history to keep seven consecutive clean sheets, after AC Milan (seven ending in April 2005) and Arsenal (10 ending in April 2006).Pep Guardiola has seen his teams score 100+ goals in all his 12 seasons as a manager, since 2008-09.Phil Foden has been directly involved in 20 goals in all competitions for City this season (11 goals, nine assists).Since his Manchester City debut, Kevin de Bruyne has scored 25 goals from outside the box in all competitions – three more than any other Premier League player in this time.Foden became only the 19th player in Champions League history to reach 20 appearances before turning 21 (20 years, 292 days) and only the fourth Englishman, after Theo Walcott, Trent Alexander-Arnold and Jadon Sancho.

'We controlled the game' – what they said

Manchester City manager Pep Guardiola told BT Sport: "It was a good performance, we controlled the game from the beginning.

"Players like Phil Foden, Bernando Silva have a lot of quality, they help us a lot but everyone was so committed and we're delighted to be in the next stage.

"We now have everybody fit. That's why we can rotate six or seven players. If you want to compete for competitions you have to be fresh. The seasons are so long, we haven't had one long week [off] since October."

Manchester City play at Everton in the FA Cup quarter-finals on Saturday (17:30 GMT) and then, following the international break, return to the Premier League away at third-placed Leicester on Saturday, 3 April (17:30 BST).