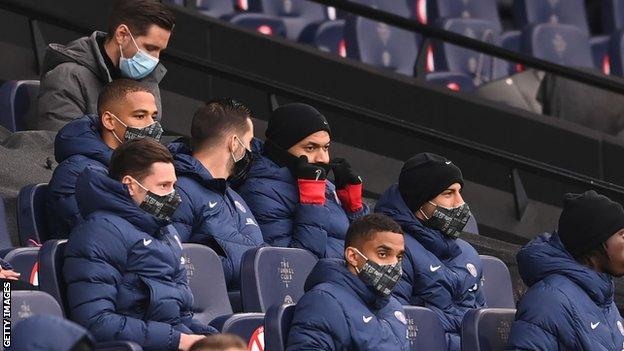 Mbappe, 22, was an unused substitute because of a calf injury during City's 2-0 win on Tuesday, which sealed a 4-1 aggregate victory in the semi-finals.

"They were clinical," said Pochettino, who became PSG boss in January.

"I congratulate Manchester City, they're having a fantastic season."

Without Mbappe, PSG failed to breach a superb defensive performance from City and did not register a shot on target, with replacement Mauro Icardi ineffective.

"That [Mbappe's absence] cannot be an excuse," added Pochettino, a Champions League finalist with Tottenham in 2019.

"We are a team. Of course, it's unlucky he was not ready to help the team, but that's not an excuse. We cannot use that excuse because the performance from the team was good.

"We played the game we planned to play. We started really well, creating chances and dominating Manchester City. That's not easy.

"Sometimes in football you need a percentage of luck in some periods of the game. They scored from a situation where we were pressing high, with a long ball.

"The players will all feel disappointed. We did well. The plan, the game was good. This type of game you need luck to go your way."

In the first leg, PSG had Idrissa Gueye sent off and they also ended with 10 men at Etihad Stadium after Angel di Maria was shown a straight red card for kicking out at Fernandinho.

Pochettino, whose side are second in Ligue 1, one point behind leaders Lille with three games to go, added: "With the red card of Di Maria, that changed the feeling.

"It was difficult for the team and we were open. But the team always fight – that is why I am proud of my players.

"That is the most important thing. We were alive. Of course I am disappointed. I am not going to lie and say we are positive."

After the match, PSG players Ander Herrera and Marco Verratti reportedly claimed referee Bjorn Kuipers swore at them during the game.

Speaking in his news conference, Pochettino said: "They explain in an interview with the TV. I think we must believe what they are telling us.

"If there is something there and that is how they explain then maybe Uefa will investigate the situation."

The Northern Bank Job: The biggest bank heist in British and Irish history is revisitedLife Changing: What's it like to lose all your memories overnight?
Source