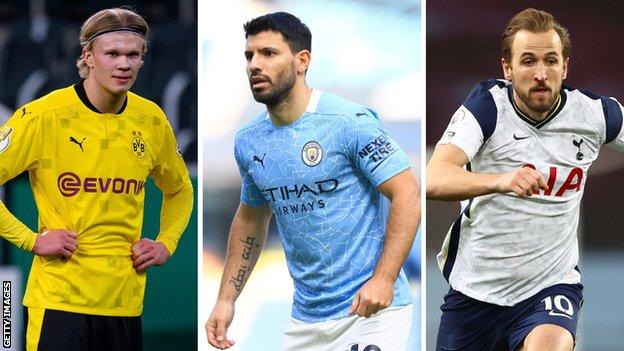 Manchester City manager Pep Guardiola has said the club are unlikely to buy a striker this summer to replace the outgoing Sergio Aguero.

City confirmed on Monday that Aguero, 32, will leave when his contract expires at the end of the season.

Guardiola has been looking at options, with Borussia Dortmund striker Erling Braut Haaland, 20, at the top of the list of potential targets.

However, Guardiola feels the fees currently being quoted are too high.

"I don't know what is going to happen but at these prices we are not going to buy any striker," he said.

"It's impossible. We cannot afford it. All the clubs are struggling financially, us as well.

"Today there is more chance we will not buy a striker next season."

Dortmund are reported to wantexternal-link at least 150m euros (£128m) for Norway international Haaland, whose agent Mino Raiola has met with Barcelona and Real Madrid about a move.

Haaland's current deal expires in 2024, though it is thought to contain a release clause of 75m euros (£64m) that can be activated next year.

England captain Harry Kane is another possible option for City, though his Tottenham contract also does not expire until 2024.

Aguero, who signed from Atletico Madrid in 2011, is City's record goalscorer, with 257 goals in 384 appearances for the club.

He famously scored the injury-time winner against QPR in 2012 which clinched the club's first English title in 44 years, and has since helped City win three more Premier League titles, one FA Cup and five League Cups.

Guardiola said it is "impossible" that City could replace the Argentine with someone who would replicate his achievements.

"We know how important he is in present and past, these decisions are never easy," he said.

"Maybe we are going to find a new player to replace him but in terms of numbers? Impossible.