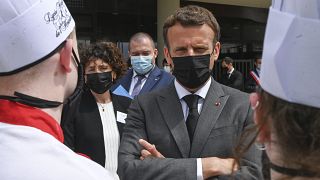 The man accused of slapping French President Emmanuel Macron during a visit to southeastern France earlier this week will serve at least four months in prison as part of an 18-month sentence.

The man, identified as Damien T. has admitted during hearings “hitting the head of state and pronouncing words denouncing politics,” public prosecutor Alex Perrin said in a statement.

The 28-year-old was brought up for immediate trial on Thursday, authorities said.

The suspect, who is close to the “yellow vests” protest movement and shares ultra-right views, said he “acted instinctively” to express his dissatisfaction, Perrin said.

Footage circulating on social media showed the incident in Tain-l’Hermitage, around 90 kilometres south of Lyon.

Macron, who was on a visit to a Drôme hospitality school, was struck on Tuesday in the face while shaking hands with a member of the public.

The attacker was heard to cry out “Montjoie! Saint-Denis!” a centuries-old royalist war cry, before finishing with “A bas la Macronie,” or “Down with Macron.”

The incident has sparked indignation throughout the country. Speaking at the National Assembly, French Prime Minister Jean Castex said: “Through the head of state, that’s democracy that has been targeted.” The comments prompted loud applauds from lawmakers from all political parties.

Emmanuel Macron slapped in face during visit to southern France

Damien T. and his associate Arthur C. were arrested shortly after the incident. Their custody for “violence without incapacity on a person holding public authority,” has been extended, according to the magistrate.

The charge is punishable by up to three years imprisonment and a fine of €45,000.

Arthur C. will be summoned to court at the end of next year to respond to “offences related to illegally held weapons” found at his home, according to Perrin.

Police who searched the home of Arthur C. also found a copy of Adolf Hitler’s manifesto “Mein Kampf,” and two flags, one symbolising Communists and another of the Russian revolution, the prosecutor said.

Both men are members of local groups linked to “the martial arts, the Middle Ages and the manga universe,” the magistrate said.

They have no judicial record and were not on the radars of intelligence services.