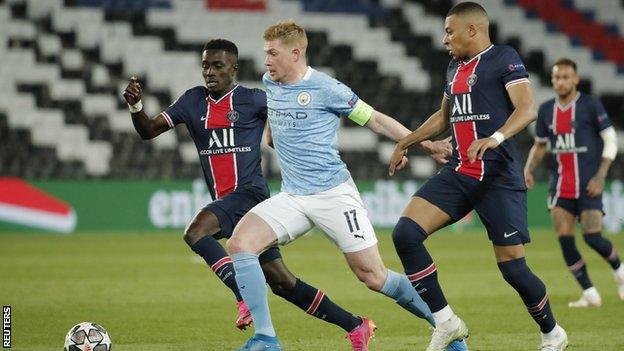 The return leg of the semi-final takes place next Tuesday

Manchester City could have been forgiven for being haunted by ghosts of Champions League campaigns past in what threatened to be a traumatic night in Paris – instead they produced arguably their most significant result and performance at this elite level.

When Paris St-Germain dominated the opening 45 minutes of this Champions League semi-final first leg, City faced old doubts born of times they have fallen short in the latter stages in the past. They were, at times, uncharacteristically passive, although always in the game.

Neymar was in his element and PSG's constant threat was quickly turned into a lead when Marquinhos glanced home Angel di Maria's deadly corner after only 15 minutes.

The visitors kept their nerve, stood firm and slowly but surely rode out PSG's storm, growing in confidence and quality as the minutes ticked by.

And their resilience, allied to the sheer class of Pep Guardiola's team, resulted in a truly outstanding second-half performance that brought a fully deserved 2-1 win, two away goals in the bank and the best chance City have ever had of reaching the Champions League final.

All this comes with a warning.

This tie is not over by any stretch, despite City ending the game in Paris totally controlling affairs with PSG a ragged, undisciplined mess – as illustrated by Idrissa Gueye's awful late challenge on Ilkay Gundogan that saw the former Everton man sent off.

PSG now have six days to gather their thoughts and manager Mauricio Pochettino has form when it comes to Champions League semi-final comebacks after his involvement in Tottenham's remarkable revival from two goals down to win 3-2 with the last kick of the match against Ajax to reach the final in 2019.

Those previous disappointments of City's will now act as a shield against any possibility they may feel this is job done – and two names alone ensure vigilance will be vital.

Any team with Neymar and Kylian Mbappe as its spearhead is capable of turning around a 2-1 deficit. Mbappe was quiet in Paris. There is no guarantee he will be similarly subdued at Etihad Stadium.

For City, though, this was a 90 minutes with the potential to be a landmark night, a transformative game, in their quest to win the Champions League, the trophy their Abu Dhabi-based owners want to claim above all others to confirm their status at European football's top table.

The Premier League leaders were up against a high-class side with two of the world's greatest forwards in Neymar and Mbappe and another high-class operator in Di Maria. They were on the back foot in those early phases.

In the past that might have led to City going under – not a bit of it here. They rose to the challenge and more besides. In the end the scoreline could have been even more convincing.

So is this the night City finally cleared the psychological barrier, the insurmountable hurdle, that was stopping them making that final leap to Champions League glory?

There is still work to be done, and history will tell City nothing can be taken for granted, but they have worked themselves into a superb position to face either Chelsea or Real Madrid in the final in Istanbul on 29 May.

They demonstrated maturity then quality to stay in the game. In the end they simply over-powered last season's beaten finalists.

Guardiola will have been encouraged by his side's improvement as the first half went on. They should have equalised when Phil Foden shot straight at PSG keeper Kaylor Navas but it was the catalyst for a stellar second half.

They pressed much higher up the pitch; full-backs Kyle Walker and Joao Cancelo became more positive. They simply claimed possession and refused to concede it. If the first half was a struggle at times, the second was the complete package.

And so to next week.

It would be a surprise if City changed their approach in the second leg with the momentum and impetus with them, this win achieved without the use ofa conventional striker. Sergio Aguero was on the bench, where he was joined by Raheem Sterling, whose recent form has been indifferent.

PSG still pose a serious threat and there is no way City will be making arrangements for Istanbul, despite a performance that marks them down as huge favourites to progress to the final.

City need to apply the final touches before they can finally contemplate a place in their first Champions League final – but the foundations are now firmly in place after a glorious night in Paris.