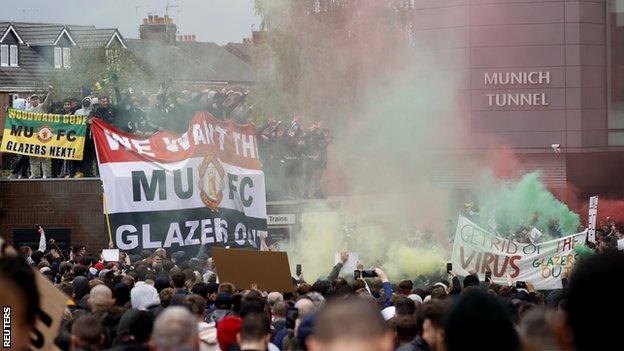 Fans protest outside Old Trafford against the Glazers, who took over Manchester United in 2005

It was at an entrance to Old Trafford round the back of the Stretford End, away from the noise and the flares that accompanied the start of the Manchester United fans' protest at Old Trafford, that those who made it onto the pitch entered through.

Most were young lads in their 20s, coming down the hill in wave after wave. But not all.

There were women and older men too. One, probably in his late 50s or early 60s, wore a green and gold scarf and woolly hat – the colours of United's first shirts when they were formed as Newton Heath in 1878, and of the original anti-Glazer protests in 2010

After he had left the stadium compound, he remained with those waiting for the United team bus that never arrived.

He was not angry and spoke calmly to fans and media in the same area, wanting to know the latest about what was happening on the other side of the ground, or around the team hotel, where he had been earlier.

Those fans, he felt, were more sinister than the ones at the stadium. But he didn't condemn them. He accepts they have a common goal. Emotions have been simmering for 16 years, so a bit of aggression is understandable, the theory went.

A large protest was expected outside the ground before the match with historic rivals Liverpool – but no-one expected fans to force their way into the stadium and on to the pitch and for the match to be postponed.

It was the third major fans protest against the club and its owners in recent days following a protest at Old Trafford last Saturday and fans entering the club's training ground at Carrington the previous Thursday.

Like supporters of the other five 'big six' clubs, Manchester United's fans are angry about the European Super League proposals. They don't want it and will voice their opposition – just as fans of the other five English sides have done.

What sets United apart is that their fans are not surprised at the actions of their owners – the US-based Glazer family.

Indeed, to those fans, it merely underlines their view that the owners of their football club only care about money and that they have no affection for the world-famous 149-year-old institution they are in charge of.

If they did, the argument goes, they would never have landed the club with the enormous debt associated with their controversial £790m leveraged takeover in 2005.

Manchester United were a debt-free organisation when they were on the stock market prior to the Glazers buying the club. The fans believe the Glazers should have used their own money.

That debt currently stands at £455.5m, according to the club's latest accounts, which were released on 4 March, 2021. It is estimated that in general finance costs, interest and dividends, the Glazer takeover has cost United in excess of £1bn.

There is nothing new in this. Many United fans were genuinely angry when Sir Alex Ferguson used to defend the owners. The Scot repeatedly said the Glazer family backed him in the transfer market and never offered criticism.

Those fans felt Ferguson's brilliance as a manager masked underlying issues around the money being invested in United's playing squad.

It is no surprise the 'green and gold' anti-Glazer campaign began in 2010, when United were experiencing a dip after three successive Premier League titles, nor that it fizzled out when Ferguson got his team playing like champions again and reached another Champions League final.

But for some, the sentiment never dimmed. Disenchantment with the Glazer stewardship of United has grown with every passing year since Ferguson retired in 2013, not just because the club's fortunes have slipped, but because despite the relative failure, tens of millions of pounds go out of the club, either directly to the family or because of the way they run United.

There is a counter-balance to this narrative.

The owners are responsible for the phenomenal rise in Manchester United's commercial revenue. They were the ones who aggressively pursued the regional approach, which every other similar sized club has followed.

The Glazers introduced a commercial plan which was different to any other club. Other than the major deals with Adidas, Chevrolet and others, they sell on a regional basis across the globe, so they have telecoms partners in USA and Canada, another in Africa, another in China. They recognised United were popular and maximised the popularity.

It can be argued, with some justification, that the Glazers are responsible for a significant proportion of United's rise in income and what they take out is only a percentage of it.

United sources never tire of drilling home the message that the money the club raises is done to improve the playing side, whether it be through big-money signings or academy prospects.

Beyond question, they have spent a lot of money on players. Whether they have bought the right ones is debatable though, and the Glazers are blamed by some for not putting the processes in place to get the recruitment right.

In recent times, Ole Gunnar Solskjaer, a patron of the Manchester United Supporters Trust (Must), which has campaigned against the family, has, like Ferguson, been condemned for not criticising the owners.

Yet Solskjaer, when I asked him about the planned protests in the build-up to Sunday's game, said the fans' voice "needs to be heard".

That probably explains the wording of the club statement on Sunday night, which in addition to condemning those who put "other fans, staff and police in danger", also acknowledged their right to free expression and peaceful protest, in addition to highlighting their passion.

In the aftermath of the ESL's collapse, co-chairman Joel Glazer said he accepted there was a need for greater communication with supporters.

That said, he opted not to join an emergency fans forum on Friday when Must were amongst the signatories of a letter, read out to executive vice-chairman Ed Woodward, stating the fans did not trust or believe the owners.

It is doubtful whether bridges between the two sides can ever be built but even securing some sort of peace, however uneasy, may not be easy to achieve.