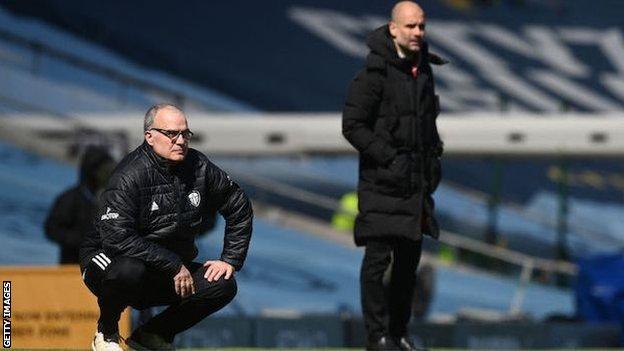 Leeds United manager Marcelo Bielsa has denied reports he is to sign a new two-year deal with the club.

Argentine newspaper La Nacion claimed Bielsa and the club were "very close" to an agreement.

Bielsa joined Leeds in 2018 and guided them to the Championship title last season, earning promotion to the Premier League after a 16-year absence.

"That information is not real," said Bielsa, whose current deal expires at the end of the season.

"I ignore the origin. Those things, either the club can say or I can say it, we are the ones who possess the information.

"In all cases, if there was any information to give, then I would give it."

Bielsa has spent more time with Leeds than he has as manager of any other club.

He prefers to deal with contracts after seasons have been completed, with his current one-year deal signed 24 hours before the current Premier League campaign started.

Leeds beat league leaders Manchester City on Saturday to climb back into the top half of the table, and play Liverpool at Elland Road on Monday.

Victory against Jurgen Klopp's side would earn them a fourth straight win in the top flight for the first time in 20 years.

"I have always said that the dimension of the institution at Leeds is very big," said Bielsa. "The sporting past of Leeds is full of very high points.

"To be able to be at the height of some of their past successes, some extraordinary things need to be done and we are quite far away from being there."

Leeds will be without their suspended captain Liam Cooper for Liverpool's visit, after he was sent off against City.

Winger Raphinha (dead leg) and forward Rodrigo (muscle strain) will be assessed before the game.