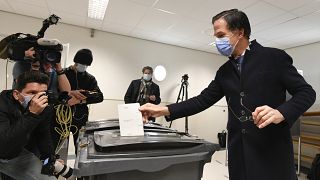 Prime Minister Mark Rutte’s political party is likely to win the most seats in the Dutch parliament, according to a preliminary forecast by ANP news agency based on a counting of 63% of the votes.

“I note that the result of this election is that Dutch voters gave my party a massive vote of confidence,” Rutte said as exit polls were released.

Voting stopped on Wednesday after being spread out over three days due to the pandemic. The general election came a few months after the government’s resignation over a child welfare benefits scandal.

Yet caretaker PM Rutte’s centre-right People’s Party looks likely to win 36 seats in the 150-seat parliament, increasing their current number of seats by three, according to the preliminary forecast.

This means Rutte will likely form his fourth coalition government and become the country’s longest-serving prime minister. He has already been in office for over a decade.

The liberal party Democrats 66 (D66) came in second in ANP’s forecast with 24 seats, an increase of five seats compared to 2017.

Dutch election: Far-right accounts are trying to spread claims of voter fraud like Donald TrumpDutch election: Will voters plump for change during a pandemic?

The Party for Freedom, a right-wing nationalist party, was set to win 17 seats, which would be three seats fewer than they won four years ago.

The Christian Democratic Appeal (CDA) was expected to gain 15 seats compared to their previous 19 seats in parliament in 2017.

The GroenLinks (GL) and Socialist Party (SP) both looked likely to reduce their seats, winning nine seats compared to 14 for both parties in the last election. The Labour Party (PvdA) was also set to win nine seats, according to the forecast.

The forecast also suggested that the right-wing Eurosceptic party Forum for Democracy (FvD) will increase their seats from two in 2017 to eight.

The Party for the Animals which stands for animal welfare looked likely to win six seats.

There were also several parties that won seats for the first time, including the pro-European Volt Party which was likely to win three seats, according to the forecast.

Turnout was at 82.6 per cent, according to exit polls.

Forming a government could take weeks as Rutte’s party needs to build a coalition. The Prime Minister has said coalition talks would likely start with the D66 party and the CDA.

Rutte’s government resigned in January ahead of the general election over a welfare benefits scandal. It had emerged that the tax authorities wrongly accused 26,000 families of fraud and demanded the repayment of thousands of euros between 2013 and 2019.

The government also faced large protests over COVID-19 restrictions; Rutte has nonetheless been viewed as a steady and modest leader.