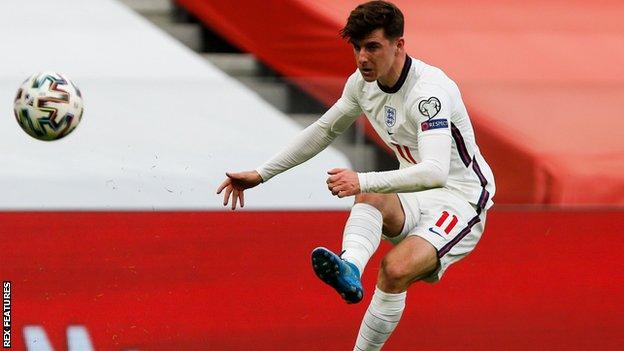 It was only a few months ago that England team-mate Declan Rice had to defend Mason Mount from criticism on social media.

"If you see day in, day out what he gives to the team as an individual, he's a top talent. The criticism is very harsh," said Rice last November.

Now Chelsea midfielder Mount is being described as approaching "certain starter" status in Gareth Southgate's team after another strong performance in Sunday's 2-0 victory over Albania in their second group game in 2022 World Cup qualifying.

Mount is the first Chelsea player to score or assist in three consecutive England appearances since Frank Lampard, who did so in seven in a row in a run ending in May 2013.

So should the 22-year-old be considered a regular starter for the Three Lions?

'Now Tuchel picks him everyone will agree'

Some of the criticism of Mount in November 2020 appeared to focus around him starting for England instead of in-form Aston Villa midfielder Jack Grealish, who is currently injured.

The player came under fire from fans who believe he received preferential treatment from Southgate.

After scoring England's second goal against Albania, a classy finish after being set-up by Harry Kane, Mount was described by Southgate as an "exceptional player".

"But I was saying this in the autumn," added the Three Lions boss after his side continued their 100% winning start to the qualifying campaign.

"I suppose now [Chelsea manager] Thomas Tuchel picks him probably everybody will agree. When it was Frank [Lampard] it didn't count for some reason but he's an exceptional player.

"He finds space intelligently, he manipulates the ball very well, he creates chances, he can score goals.

"I thought his performance was excellent."

Will Mount start against Poland?

Mount has scored four goals in 15 appearances for England.

Southgate said he could start his third England game inside a week when Poland visit Wembley on Wednesday (19:45 BST)

That qualifier promises to be a much sterner test for England than San Marino and Albania have provided in the past few days.

Asked if he would be prepared to start Mount against Poland, Southgate said: "Absolutely.

"I think we've looked out for all of the players in the first game and his load coming into the camp was that he didn't play in the midweek in the Champions League.

"But regardless of that, we're trying to win and qualify for a World Cup."

Mount's club Chelsea are at home to West Brom next Saturday (12:30 BST) before facing Porto in the quarter-final first leg of the Champions League on 7 April. 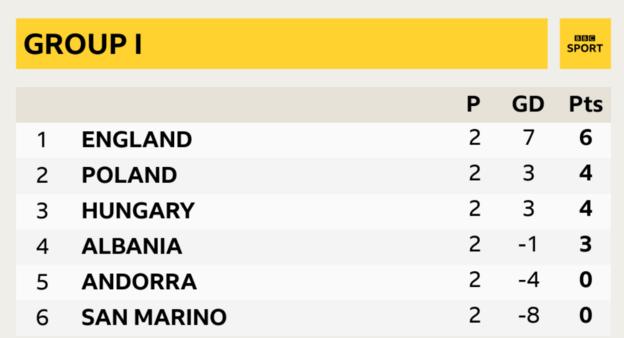 England manager Gareth Southgate will have his favoured starting line-up for this summer's delayed Euro 2020 firmly fixed in his mind – and the men who made the difference in Albania must be in it.

There is never a question over England captain Harry Kane, one of Europe's finest strikers who boasts a superb international goalscoring record that now stands at 33 in 52 games after his opener in the 2-0 win in Tirana.

Chelsea's Mason Mount may not have his name written in quite as indelibly as Kane but it is increasingly obvious that this impressive, talented 22-year-old must start against Croatia at Wembley on 13 June.

Southgate is almost over-crowded with competition in and around his attacking areas behind Kane, with Manchester City's Phil Foden and Grealish of Aston Villa, missing injured here, with aspirations of their own.

It means a player as talented as Leicester City's James Maddison has a fight on his hands to get England's full attention.

Mount, however, is now approaching the status of a certain starter. He is composed on the ball, a creator and scorer of goals for Chelsea and England and with the sort of measured, mature temperament that makes him a natural fit at international level.

He has had his doubters in the past, perhaps attracted by the more immediate eye-catching contributions of Foden and Grealish, but Mount has once again proved his stature and barring late setbacks will be a key component of Southgate's Euro 2020 plans.