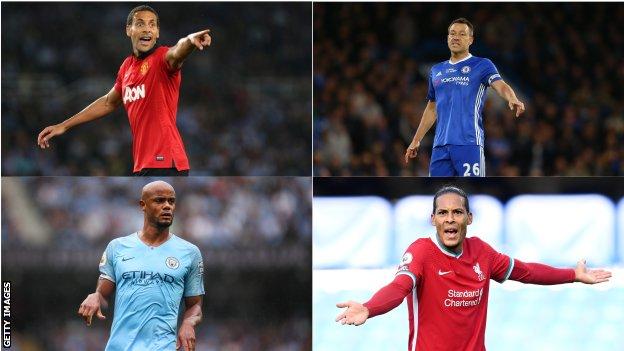 There's no question that the role of a defender has changed somewhat in the last decade – so what makes a world class centre-half?

Gary Lineker, Alan Shearer and Micah Richards discussed the best centre-halves to play in the Premier League in the latest Match of the Day: Top 10 podcast.

You can listen to the podcast on BBC Sounds and have your say by ranking your choices at the bottom of this page.

Listen to the Match of the Day Top 10: Centre halves 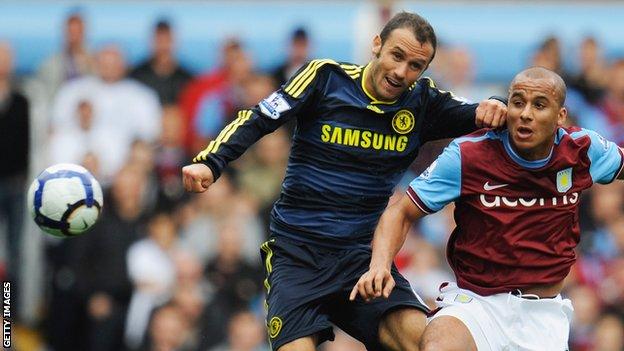 Portuguese centre-half Carvalho made 135 Premier League appearances for Chelsea in his six seasons between 2004-2010 – winning the title three times. He partnered John Terry for much of his time at the London club, including the 2004-05 season when they conceded only 15 goals under Jose Mourinho.

Richards: We have these perceptions of what these players should look like, someone like Rio Ferdinand, who is so elegant on the eye, whereas Carvalho wasn't. But he won three Premier League titles at Chelsea so he's a top player. Sometimes our eyes can play tricks on us – he really was a fantastic footballer.

Shearer: He was only quite small but he could put a crunching tackle in, he had a nasty side to him. There are a lot of these players that you think of and then think of their partner, he was obviously partnered with John Terry which was a great partnership. 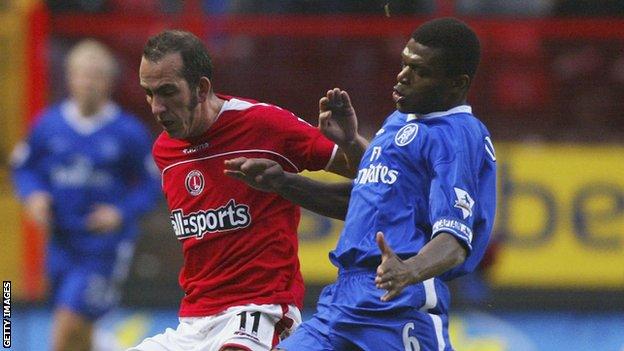 France international Desailly formed half of a formidable partnership at Chelsea with fellow countryman Frank Leboeuf. He made 158 League appearances for the Blues in his six-year stay after signing from AC Milan in 1998. He didn't win a Premier League title with Chelsea but was part of the 1998 France team that won the World Cup.

Shearer: In terms of what you need as a defender – quick, good in the air, agile, could tackle – he was a brilliant player. Him and Leboeuf were the partnership at Chelsea and he asked me once why I would never go and stand on him and I said 'well why would I come and stand on you when I can stand on Frank?'. But I reminded him of that when I turned him at St James' Park and launched one in from 30 yards out.

Lineker: He has won a World Cup… He said to me once doing punditry together that "France has had some of the greatest players of all time – Zinedine Zidane, Michel Platini and Marcel Desailly" – it was one of my greatest moments in punditry and he wasn't joking! 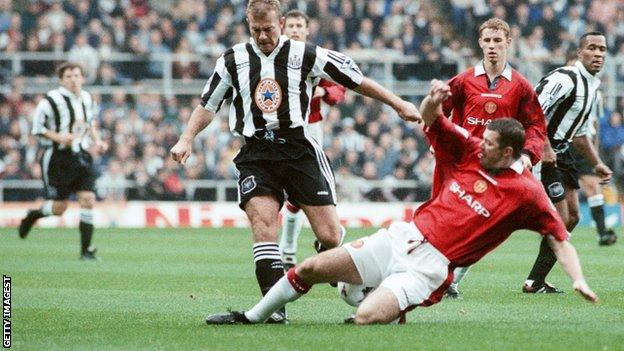 Pallister arrived at Manchester United in 1989 for a record £2.3m fee from Middlesbrough. He made 206 Premier League appearances for United, mainly played alongside Steve Bruce, helping Sir Alex Ferguson's side win their first Premier League title in 1993, as well as the 1990 FA Cup, Ferguson's first trophy as United manager.

Shearer: Lovely guy and we had some great battles – he kicked me and I kicked him. He could play out from the back and he played in an unbelievable team at Manchester United, him and Bruce had a great partnership. He could do everything. 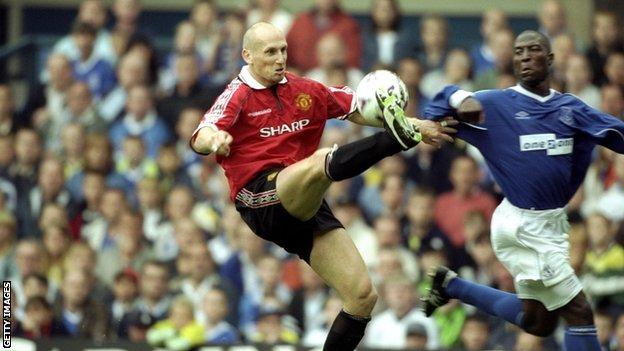 Another stalwart of Manchester United's defence, Stam made 79 Premier League appearances between 1998-2002, winning the title for three consecutive years between 1999-2001 as well as being an important part of the team that did the treble in 1999.

Shearer: He was quick – he was a big set guy but still very quick.

Richards: Amazing numbers in terms of titles and appearances but he's not someone I would look up to and think I want to play like him.

Serb Vidic made 211 Premier League appearances over nine seasons for Manchester United – winning five titles, including three consecutively between 2007-09, and the Champions League in 2008.

Richards: He was a top player but Fernando Torres always used to have him on toast. I just believe that some of the players I've put above him had a bit more in terms of both aspects to their games.

Lineker: Perhaps a bit of bias against Manchester United there Micah!

Liverpool's Van Dijk, 29, is the only centre-half in this list still playing at the top level. Since signing from Southampton in 2018 for a fee of £73m he has made 95 Premier League appearances for the Merseyside club. He helped them win the Champions League in 2018-19 and was a crucial part of the team that won Liverpool's first top-flight title since the 1989-90 season last term.

Shearer: He's a game changer for Liverpool – he took them to where they wanted to go. Liverpool have missed him and his leadership this season because of his injury. They have this pressing game and they have the confidence in him that they can leave him one v one, it's not a problem because if they want to knock it over the top he can turn and be as quick as anyone. We've seen them this year not pressing as much as they could and should, because they don't feel the confidence to do it without him.

Richards: He could be the greatest ever, maybe it's getting a bit late now in terms of age and he's had his injury but he had an instant impact – there's no question marks over him, he can do everything. I can't believe when he was at Celtic that Manchester City didn't take a little punt on him.

Lineker: It's easy to say that now though because none of the so-called 'big boys' took a punt on him and even when Liverpool signed him people were saying 'how much?!'. 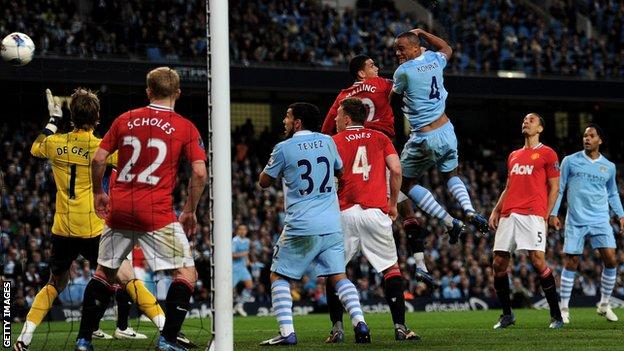 Kompany joined Manchester City under then manager Mark Hughes from Hamburg for £9m as part of City's rebuild when Sheikh Mansour bought the club in 2008, and the Belgian became synonymous with the Blues during his decade-long stay. He made 236 Premier League appearances and helped them win the 2011 FA Cup, their first major trophy since 1976, a second FA Cup in 2019, four Premier League titles and four League Cups, before returning to his boyhood club Anderlecht in 2019.

Richards: Sir Vincent Kompany – we [Manchester City] played at Hamburg in pre-season and he played as a number 10. He was doing tricks, stepovers and had great feet – we signed him. One of his first games he was ridiculously good in midfield, spraying passes about. In the games after it was just 'good' – he could do a good job in there but there was a game against Arsenal when his touch was awful and after that he went to centre-back and when he did that I thought 'wow' – he was the best defender I've ever seen.

He's a real leader. He can be selfish at times, he is a perfectionist and if you don't do things at his level he takes things to heart. When he first came to the club under Hughes we were a shambles. Kompany was a major part of taking the club to the next level when the new owners came in. He can be a bit serious at times, but he was doing it because he wanted to be the best.

Lineker: Smart, intelligent guy and a scorer of vital goals at key moments in league winning seasons. The one against Manchester United and the long distance one against Leicester – crucial moments.

Shearer: His attitude [was superb], he was a winner. He came in when it wasn't so good and saw it all through, the managers stuck with him and realised what he had and what he brought to the club – that tells you everything you need to know about him. 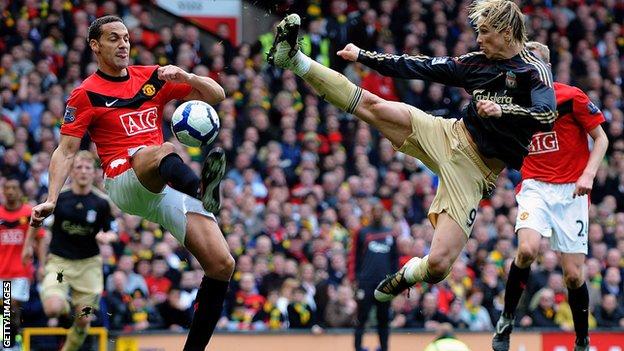 Ferdinand joined Manchester United in 2002 from Leeds for £41m. He had 12 seasons with the Red Devils where he made a total of 312 Premier League appearances, partnering Vidic for much of his time there. Ferdinand was a significant part of United's success, helping them to win an incredible six Premier League titles, three League Cups and a Champions League trophy, before departing for Queens Park Rangers in 2014.

Richards: Rio was top notch, when I went to the England camp he was like nothing I'd ever seen before. He was so relaxed on the ball, he could see a pass, everything was easy for him. He had it all, effortless, he looked like a centre-half. He always used to talk to me when we played for England, tell me when to go, when not to go – and for a senior professional to do that and talk you through the game it makes things so much easier.

Lineker: He told me once that playing for England, Sven-Goran Eriksson told him he didn't want him to come out of defence with the ball at all, he was to stay in defence and that he was prohibited from coming out with England, which is just extraordinary.

Shearer: It beggars belief that someone with that ability would be told you're not allowed to do that. A Rolls Royce of a centre-half – elegant, could bring the ball out with pace, could start the move, could stop the move, clever, could read the game. 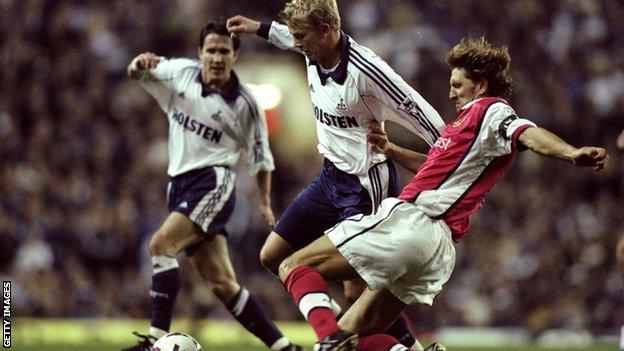 A one-club man, Adams made his debut for Arsenal in 1983 and went on to play for the Gunners until 2002. He made 255 Premier League appearances, winning four top-flight titles, three FA Cups and two League Cups.

Shearer: I would come off with cut eyes, a broken nose and cut lip after a game against him, but always shake hands. Not as good as Ferdinand at spraying the ball around but what a competitor.

Lineker: I didn't mind playing against him because Arsenal always played a high line so I had space to get in behind – they did kick lumps out of you but you could hear them coming.

Terry racked up a total of 712 appearances for Chelsea during his 18-year stint at the London club between 1999 and 2017 and scored 41 goals in 492 Premier League appearances. The club captain won five Premier League titles with the Blues, along with five FA Cups, two League Cups, a Europa League and a Champions League.

Shearer: The number of times we've sat and discussed Van Dijk's diagonal balls into the forwards at Liverpool [is huge], but Terry could do that with either foot, he could play in the modern game no problem.

Richards: His record is ridiculous – 41 goals – that's what just tipped it over the edge for me. I couldn't pick between him and Rio. If I was watching a game I would go towards Rio, because he looked more elegant, but the goals tipped it for me.

Terry was always shown as being a leader, putting his head in, but he's more than that. When you trained with him you'd see him pinging diagonal balls with his left foot. He always played left side because he liked the ball there, he's right footed but the way he could ping a ball in with his left foot. His weak foot was better than my best foot.

Pick the order you would rank these Premier League centre halves in.

First1Second2Third3Fourth4Fifth5Sixth6Seventh7Eighth8Ninth9Tenth10Confirm selectionDreaming Whilst Black: Why Kwabena's dream job might mean risking it allCastro vs the World: Fidel Castro's Cuba as told by the spies, revolutionaries and diplomats who shaped it
Source