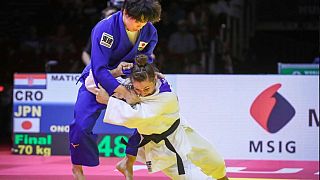 No Croatian had ever won a Judo World Championships gold medal, but Barbara Matic put that right in the -70kg contest on day five of the year’s tournament in Budapest.

Matic put in some unstoppable judo to reach the final. There she faced the Japanese veteran Ono Yoko, who herself looked in fine form with her uchi-mata throws and notorious skills on the ground.

A tense contest for gold

The Croatian won a tense contest by holding on to a waza-ari advantage, taking the title ten years after she was crowned Junior World Champion.

I was like, you already have a world medal, you already did a great job. Now all you can do is just bring your heart to the tatami and fight to the end.

“I was like, you already have a world medal, you already did a great job,” Matic said afterwards. “Now all you can do is just bring your heart to the tatami and fight to the end, and it was like that.”

A final between two attacking powerhouses

Reigning champion and world number one Nikoloz Sherazadishvili from Spain was the strong favourite in the -90kg contest, and he showed why with a fantastic uchi-mata to eliminate Nagasawa Kenta of Japan en route to the final.

Uzbekistan’s Davlat Bobonov would face him for gold, after showing that he too was a big thrower, as well as defeating home favourite Krisztian Toth in the semis.

Every time we need to improve, this is my mindset.

The final between two attacking powerhouses didn’t disappoint; an o-uchi-gari for ippon sealing the contest for Sherazadishvili.

Local hero Toth took the other bronze. The scenes of jubilation involving him and his family were the highlight of the day: he’d missed out on a medal in Budapest back in 2017.