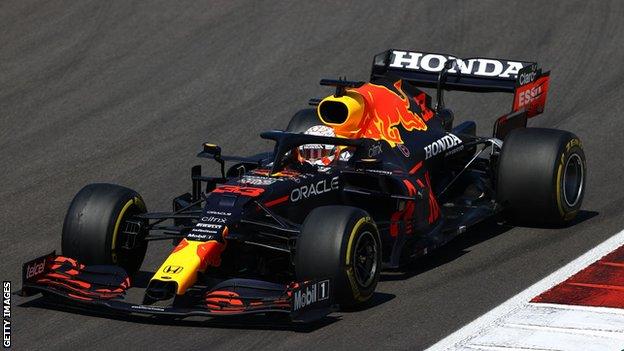 Verstappen is in his sixth season with Red Bull

Red Bull's Max Verstappen says second place at the Portuguese Grand Prix was the most he could have achieved.

The Dutchman lost pole position after his best lap was deleted for going beyond track limits.

And in the race he made a small error just before he was passed by eventual winner Lewis Hamilton.

He said on Twitter: "Looking back, I have to say that finishing P2 after a tricky few days was absolutely the maximum for us."

The 23-year-old trails seven-time champion Hamilton by eight points after three races, the Briton having taken two wins to his rival's one.

Verstappen missed out on the point for fastest lap at the end of the race after again running wide and having his lap time deleted on the final lap of the race.

He also lost victory in Bahrain at the opening race of the season after he passed Hamilton by going over track limits and had to give the place back.

Hamilton, meanwhile, was lucky with the timing of a red flag at the second race at Imola, which came at the perfect moment just after he had lost a lap by going off track and breaking his front wing.

Verstappen added in his postexternal-link on Tuesday: "This season is going to be long and we will be taking it one weekend at a time. And above all: we'll keep fighting until the end."

He was never happy with his Red Bull in Portugal, saying after the race that "it was a bit of an odd weekend in terms of grip" and insisting he "tried everything I could".

He added: "Clearly we still have to improve and do better because we should be fastest on every single track and in every single condition – because the track is the same for everyone."

Red Bull feel that, while their one-lap pace was good in Portimao, Mercedes had a slightly faster car on race day. Like Mercedes, they expect the advantage to fluctuate from track to track through the season.

His team boss Christian Horner was asked afterwards whether they could have won had Verstappen started on pole.

Horner replied: "You never know. Max had very good pace in dirty air. We lacked a bit of straight-line speed. It definitely looked easier for a Mercedes to pass us than for us to pass a Mercedes.

"It's just incredibly tight and it's about those marginal gains. But for track limits that we didn't see anybody else have the penalty Max did, he would have achieved that lap."

Horner said that transgressing on track limits had been "brutal for us across the three events".

He added: "We're still in the early phases of this championship. [Mercedes] are a fantastic team and you don't win seven titles by mistake. We have to be on top of our game in every area to beat a team like that."