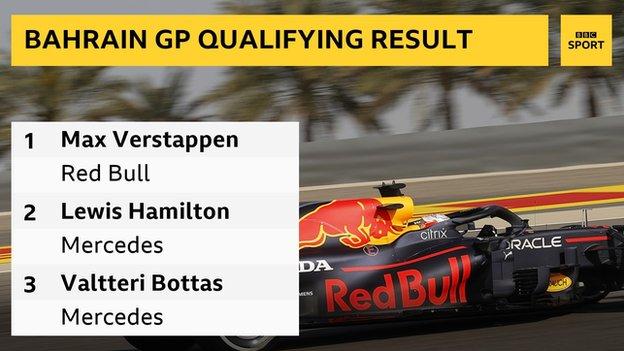 The Dutchman was 0.388 seconds quicker than Hamilton, as Red Bull made good on the pace the world champion had always said they had before the season.

How qualifying for the Bahrain Grand Prix unfolded Quiz: Can you name every F1 opening race winner since 1980?

How about that from Verstappen?

Red Bull had looked the fastest car in pre-season testing, at least in Verstappen's hands, and Hamilton had said before this race that Mercedes were "not the quickest".

Verstappen had played down his status as favourite, but his confident demeanour and body language told another story, and the car's pace on track and his driving underlined it.

Verstappen was quickest in all three practice sessions, and again in the first qualifying session, and his pace in the final session was everything he had been promising up to that point.

Verstappen pipped Hamilton by only 0.023secs on his first lap in the final session, but pulled a storming lap out of the bag on his last run. 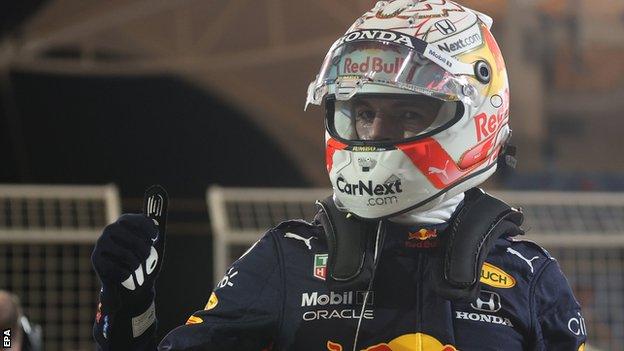 "Of course we already had a great test week," Verstappen said. "There are no guarantees, but the whole week the car has been working so well and been really enjoyable to drive. It all worked out perfectly so of course very happy with pole position.

"My first lap in Q3 wasn't amazing, so I knew there was more in it. I never knew how much but the balance was there and I could push more and luckily when it mattered we could perform.

"In general the car has been working really well in short and long runs."

Hamilton said: "Amazing. Max did such a great job. He was so fast on that last lap. Absolutely gave it everything I had, but unfortunately it wasn't good enough.

"It was the best I could do. I got absolutely everything out of the car – we did such a good job since testing, the guys back at the factory, to get the car where we needed it to be closer to the Red Bulls. In testing, we thought we were further behind."

Behind the big three 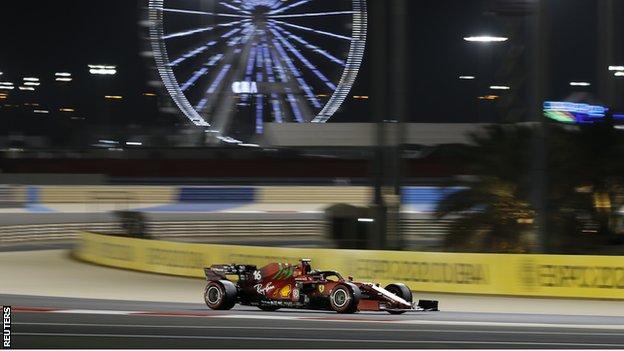 Leclerc lived up to his reputation as one of the fastest drivers in F1 on a single qualifying lap with a superlative performance in the Ferrari.

He had been out-paced by new team-mate Carlos Sainz for most of the weekend, but on his final lap he revived memories of some of his outstanding performances last year and beat Sainz by 0.537secs.

The Spaniard ended up eighth quickest, just ahead of the Alpine of Fernando Alonso, back in F1 after two years away.

Alonso had appeared to be struggling through the practice sessions, but he came alive in qualifying. He was 0.5secs quicker than team-mate Esteban Ocon on his first lap in the first session before the Frenchman was hampered by a yellow flag on his second lap and was knocked out at the end of Q1.

Behind Leclerc, Gasly proved that the Alpha Tauri team, Red Bull's second outfit, have made great strides over the winter, to beat the McLarens of Daniel Ricciardo and Lando Norris.

The Frenchman's rookie team-mate, the Japanese Yuki Tsunoda, caused a sensation when he went second fastest in the first session, but he fell away as qualifying progressed, and failed to make it through the second session to line up 11th on the grid.

Gasly has an advantage over Leclerc, the McLarens and Alonso in that he made it through Q2 on the medium tyre, which is the favoured tyre for the start of the race, whereas the other leading midfield cars are starting on the soft.

Aston Martin's Lance Stroll was the final driver in the top 10.

A bad start for Perez and Vettel 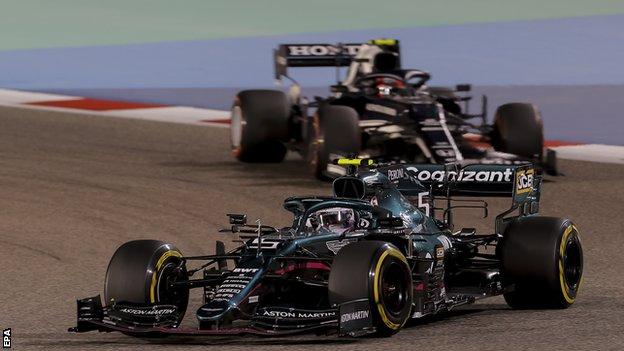 Perez was signed by Red Bull in the hope that he could be closer to Verstappen than his predecessors Alex Albon and Gasly.

But the Mexican came unstuck in the second session, when he chose to continue on the medium tyres for a second run, after being 0.4secs slower than Verstappen on his first run, and was leapfrogged by other drivers with slower cars switching to the softs.

It was even worse for Vettel. The four-time champion had been behind team-mate Stroll all weekend, and had a mediocre lap on his first run in Q1. He could not improve on his second run because Haas rookie Nikita Mazepin spun in front of him at Turn One and brought out yellow caution flags.

Mazepin, who has had four spins over the course of the weekend so far, will not have won any friends by his actions, as there is a gentlemen's agreement not to overtake other cars in the queue to start a fast lap in the final corners of the circuit.

His team-mate Mick Schumacher, son of seven-time champion Michael, qualified 19th on his debut for Haas.

George Russell made it into Q2 and was 15th for Williams.