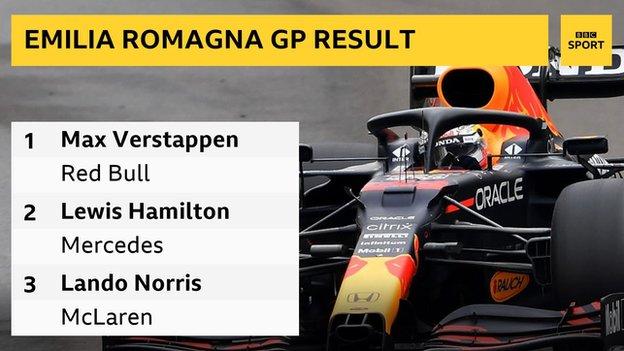 Red Bull's Max Verstappen took his first win of the year in a chaotic, incident-strewn Emilia Romagna Grand Prix as Lewis Hamilton fought back to second after a rare error.

Rain at the start led to one of the most topsy-turvy races in memory as the treacherous conditions caught out the vast majority of drivers at one time or another.

There was an early safety car and later a red flag, after a massive crash involving Mercedes' Valtteri Bottas and Williams's George Russell, rivals for a seat at the world champions in 2022.

Even Verstappen almost lost his win, when he half-spun at the restart following the red flag, but he managed to collect the car and streak off into the distance as Hamilton fought to regain lost ground.

It appeared as if Hamilton had gifted his main rival a huge advantage in what promises to be a tight championship fight when he lost control trying to lap Russell and slid into the barriers at half-distance.

But the crash between Russell and Bottas a lap later gave him a second opportunity and he made the most of it, fighting back from eighth at the restart to finish second.

After a race in which he could have scored no points, Hamilton limited the damage and actually retained the championship lead by a point earned for taking fastest lap, despite Verstappen's best efforts to take it away from him.

And Lando Norris took a superb third place after a strong weekend in the McLaren.

What a fight, what a race

It was a second consecutive action-packed race at the start of a season that shows the potential to build into a titanic tussle between Hamilton and Verstappen, one going for a world record eighth title, the other for his first.

Their battle began from the very first lap, as Hamilton was slower away on the wet track after a downpour in the hour before the race.

Verstappen, starting third behind Hamilton and the other Red Bull of Sergio Perez, was side by side with the Mercedes into the first corner.

Hamilton tried to hang on around the outside of the first left-hander of the three-way chicane, but the two touched lightly, and the Briton bounced over the kerbs and damaged his front wing.

Verstappen streaked away into a five-second lead after just two laps but Hamilton then pegged him back and they fought a cat-and-mouse fight until their pit stops for dry tyres just before half-distance. 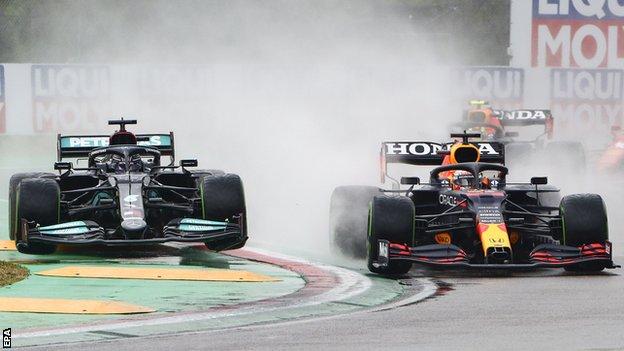 Verstappen pitted first and Hamilton the next time around, setting fastest sector times on his in-lap. But a slow pit stop ensured the Red Bull comfortably retained the lead by 5.5 seconds.

But traffic delayed Verstappen on the next lap and Hamilton closed in by three seconds. He scented a win as the pair negotiated a train of back markers including Russell.

Hamilton misjudged the grip as he dived inside the Williams at Tosa and slid into the gravel, taking off his front wing as he tried to rejoin.

His race appeared to be over as he lost a lap struggling to get out of the gravel. But as he fought to recover, Russell and Bottas collided on the very next lap as the Williams sought to pass the Finn around the outside.

At the restart, as Verstappen drove off into the distance, Hamilton set about recovering lost ground.

He quickly picked off Stroll's Aston Martin and Ricciardo's Alpine, was past Sainz's Ferrari a few laps later, and then took third from Leclerc with seven laps to go.

That left only Norris between him and second place. The younger Briton fought gamely in the McLaren but Hamilton passed him with three laps remaining.

Norris held on for third place after a superb weekend in the McLaren, making amends for losing third place on the grid by running wide and exceeding track limits.

There was action up and down the field in a race that was gripping from start to finish, but none of the incidents have long-term implications as big as the one between Russell and Bottas.

Hamilton's team-mate had not been having a good day, failing to make ground from his poor eighth place grid position. It will not have felt good being chased by a Williams driven by the man who overshadowed him when they were Mercedes team-mates for one race in Bahrain last year, when Hamilton was absent because of coronavirus.

Russell went for the outside approaching Tamburello on lap 32, Bottas covered the inside, but the left-hand kink of the track brought the Mercedes slightly back to the right.

Russell went for the gap but lost control, spinning and taking the Mercedes with him.

The accident was huge, leaving debris strewn all over the track, and the race director had no option but to stop the race.

Russell was furious with Bottas, walking over to remonstrate with him. Bottas responded by showing him a middle finger, after which Russell banged on his helmet.

The stewards investigated the incident after the race and decided to take no further action.

Driver of the day 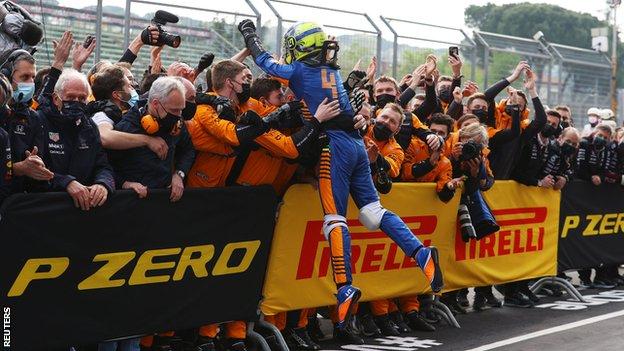 Hamilton's recovery was typically clinical and ruthless and Verstappen was imperious, but the award goes to Norris. He missed out on third on the grid with a small error in qualifying but made amends with a superb drive, passing Leclerc at the restart for second and holding off Hamilton until just three laps from the end.

Portugal in two weeks' time. Hamilton took a brilliant victory there last year and appetites for a great scrap between the world champion and the young pretender are well and truly whetted.

Max Verstappen: "It was very challenging out there, especially in the beginning. It was very hard to stay on track.

"With tyres degrading in the wet, to choose the right moment to go to slicks is never easy. I had a little moment with my restart but everything else went well today."

Lewis Hamilton: "On my side, it wasn't the greatest of days. It's the first time I've made a mistake in a long time, but I'm grateful I could bring the car home.

"There was only one dry line and I guess I was in too much of a hurry to get by everyone. I came on to the inside and I could see it was wet but it just wouldn't stop and sent me off. Solid work from Max – and also to Lando, what an awesome job. It's so good to see McLaren back up there."

Lando Norris: "It was a long race – a tough one. I didn't start so well. I tried hanging on to second but Lewis was a bit too quick. It is nice to be fighting these guys. It's nice to be here on merit. Hopefully we can be again in the future. I am happy with third. I am not disappointed." 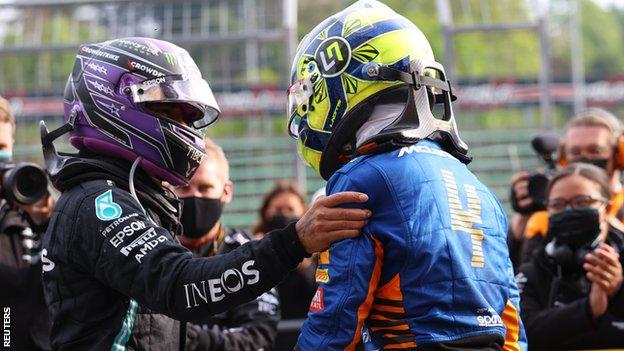 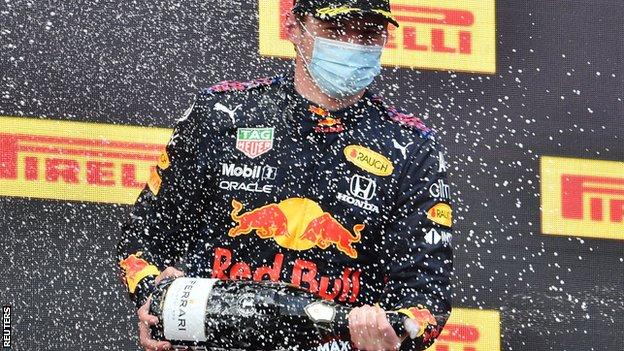 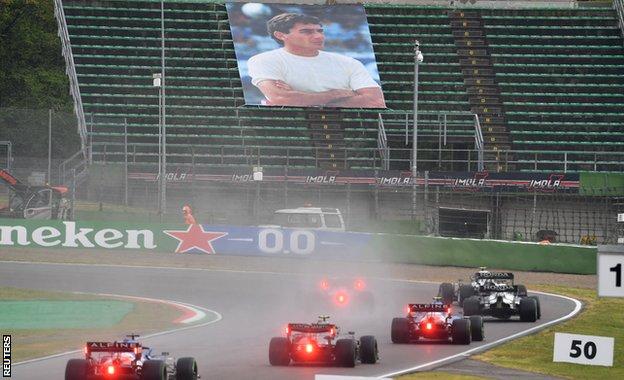 There were tributes hung in the stands to three-time world champion Ayrton Senna, who lost his life at the circuit in 1994
Source