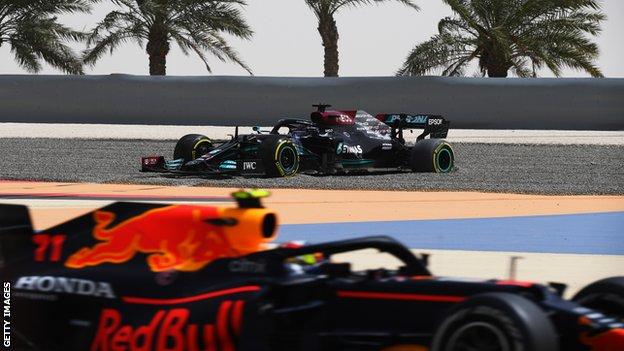 Mercedes say they expect to start the new Formula 1 season next weekend with a slower car than Red Bull.

"There are a lot of unknowns," Mercedes strategy director James Vowles said. "No-one up and down the paddock can pinpoint exactly where they are.

"But there are a few trends that have come out. I'd say Red Bull are ahead on performance. They are the class act."

Mercedes have won the past seven consecutive world championship doubles and this year Lewis Hamilton is bidding for a record eighth drivers' title.

But Hamilton admitted after the test that the car was "just not quick enough", adding that the team had "lots of work to do – it's going to be tough".

Vowles, speaking in a video released by Mercedesexternal-link analysing their performance in pre-season testing, said: "Are we going to have a close season? I would say so.

"Red Bull are a fierce adversary, they've got a strong package and clearly came out of the box very, very quick.

"The result of that is across the season and across different types of track layouts, I am sure you will see us move forwards and backwards relative to them, but I don't believe we are going into this particularly finding all the performance that is missing or being ahead of them."

Is F1 poised for a Mercedes-Red Bull battle?

Vowles said the team "don't have the answers" as to why the car was not behaving the way Mercedes would have liked.

"The car was handling poorly," Vowles said, "and conversely the Red Bull in fact looked what we would call planted, but it was a very stable car especially through the last sector of the lap.

"It was visible to the outside and I would say the lap times mirrored that as well."

Trackside engineering director Andrew Shovlin added: "The wind made it tricky. When the wind is behind the car, you lose a lot of downforce because effectively the air speed is reduced.

"So, some corners where the wind was behind, it was prone to doing that, and then also the tyres are quite easy to overheat on that circuit and if you start sliding, you tend to lose grip and it gets worse. So, there are a few problems.

"Now, importantly we could see that some of our competitors weren't struggling in the same way as us, so we need to put quite a focus on understanding why the rear end was a bit weak, how we can get it more stable and predictable and that work is going on now.

"Hopefully when we get to the race weekend, it won't be so difficult for the drivers because they were having to work pretty hard to do the lap times that they were doing."