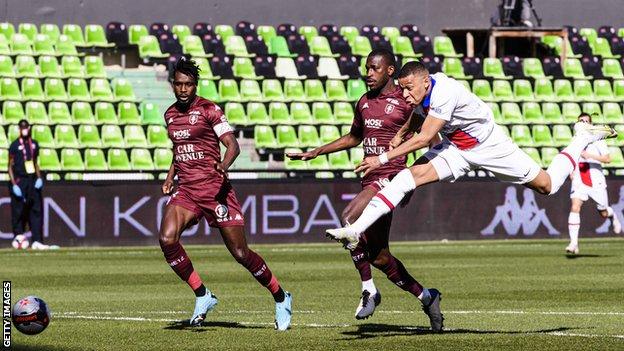 Kylian Mbappe scored twice before going off with a thigh injury as Paris St-Germain beat Metz to move two points clear at the top of Ligue 1.

The 22-year-old slotted in a fourth-minute opener and added a second with a deflected strike after Fabien Centonze had equalised with a header.

Mbappe went off injured late on before Mauro Icardi scored a penalty.

PSG boss Mauricio Pochettino is hopeful Mbappe will be fit to face Manchester City in the Champions League this week.

The two sides meet in their semi-final first leg in Paris on Wednesday (20:00 BST).

"We hope it's not too serious," Pochettino said.

"Kylian was calm when he was replaced but even a simple knock is always painful."

After his double on Saturday, France international Mbappe has scored 25 goals in 29 Ligue 1 appearances this season – and 37 goals in 42 games across all competitions for PSG in 2020-21.

The result means five points separate the top four in a tight Ligue 1 title race, however Pochettino's leaders – crowned champions in seven of the past eight seasons – have played a game more than their rivals.

Three-time champions Lille, in second, can return top with victory at fourth-placed Lyon on Sunday (20:00 BST) in a key fixture at the summit.