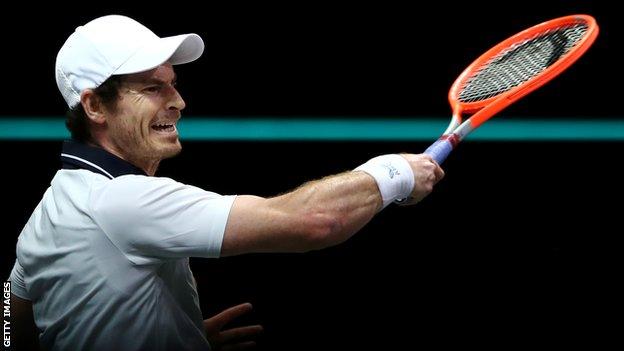 Briton Andy Murray said he is "puzzled and demoralised" by the groin injury which forced him to withdraw from this week's Miami Open.

The two-time winner, 33, was set to play South African Lloyd Harris in the first round of the tournament, which starts on Wednesday.

The world 118 said that he "struggled to walk" after developing pain while sleeping on Friday.

"I don't know where it came from and why it happened," he said.

The three-time major winner said he arrived in Miami last Wednesday, did gym work and practised with no issues.

"I woke up in the middle of the night at about 2:30, rolled over and felt like my groin was a bit sore," he said.

"When I got up at six in the morning to go to the toilet, I was in a lot of pain walking."

The former world number one has been attempting to return to the world's elite after major surgery in 2019 on a career-threatening hip problem.

He last competed at the Rotterdam Open earlier this month, where he was was knocked out in the second round by world number eight Andrey Rublev.

Murray said his current groin problem felt similar to the one he experienced after defeating Yoshihito Nishioka at last year's US Open. However, the Scot said he was at a loss to explain why this issue had flared up out of competition.

"I was pumped to come and have the opportunity to play here, I felt good and travelled over here, practised and had no issues and then this happened. It is obviously very frustrating and a bit demoralising. It's gutting."

Asked if this problem indicated that he cannot compete at the highest level, the Briton said: "I guess it's possible that is the case. But like I said, if it had come from a match that I had played or something like that, I would get that.

"But this is just a random thing that hasn't happened on the court or in the gym."

Live scores, results and order of playAlerts: Get tennis news sent to your phoneThe Terror: Ridley Scott's tale of an isolated and murderous expeditionLet's Talk About Race: Understanding what it means in the UK today
Source