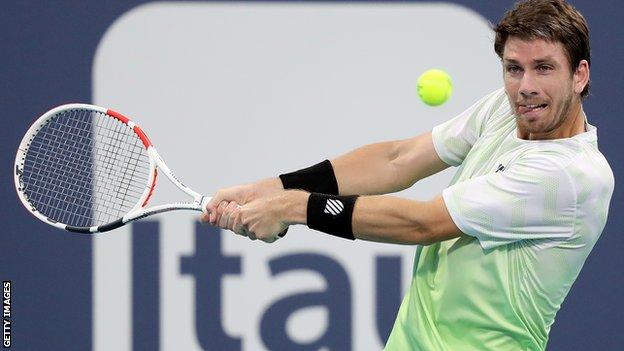 Britain's Cameron Norrie is ranked 56th in the world

Russia's Medvedev had cruised to a set and a 5-2 lead against Alexei Popyrin before he began to cramp in the heat.

"It's probably one of the sweetest victories in my career, because I was cramping like hell in the third set," Medvedev said.

"The only thing I was thinking about was not to fall down because if I fell down, I don't think I'd be able to get up."

Medvedev, who reached the Australian Open final in January, will face Frances Tiafoe of America for a place in the quarter-finals.

The Canadian, who missed the entire 2020 season with a knee injury, will play in-form Garbine Muguruza of Spain in the round of 16.

Japanese second seed Naomi Osaka, who is in contention for the world number one ranking, also advanced when opponent Nina Stojanovic of Serbia withdrew with a right thigh injury.