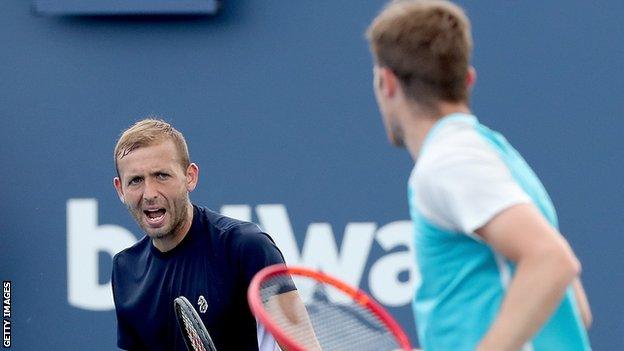 British pair Dan Evans and Neal Skupski have reached the final of the Miami Open men's doubles – in their first tournament playing together.

In the women's singles, Australian top seed Ashleigh Barty is through to the final after beating Elina Svitolina.

World number one Barty won 6-3 6-3 against the Ukrainian fifth seed, setting up a final against either Canada's Bianca Andreescu or Greece's Maria Sakkari on Saturday.

Evans and Skupski will also contest their Masters 1000 final on Saturday, when they face Croatian second seeds Nikola Mektic and Mate Pavic.

All of Thursday's WTA and ATP results at the Miami Open

Defending champion Barty, 24, produced a high level – both technically and tactically – against Svitolina and finds out later on Thursday if she will meet eighth seed Andreescu or 23rd seed Maria Sakkari.

"I thought I played a really good match, I wanted to be aggressive and I executed it," Barty said after beating Svitolina for only the second time in seven meetings.

"To be in the last match of the tournament, I'm grateful to have another opportunity to play for a title."

The 22-year-old lost his way after failing to convert two break points for a 3-0 lead in the second set, allowing 26th seed Hurkacz to fight back and reach a Masters 1000 semi-final for the first time.