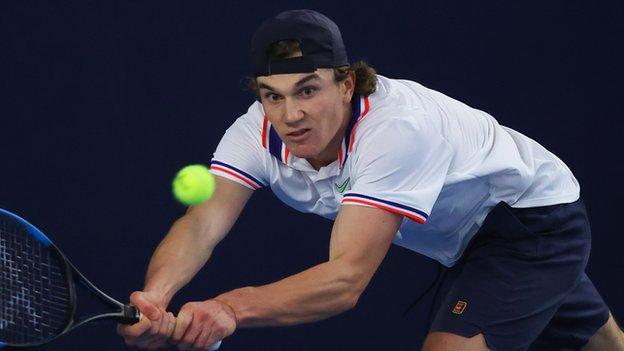 Jack Draper, ranked 316th in the world, was given a wildcard to play at the Miami Open

British teenager Jack Draper was forced to retire from his debut on the ATP Tour after struggling with the heat and collapsing on court in the Miami Open.

Draper, 19, had to stop after falling when he chased a return on a set point against Kazakhstan's Mikhail Kukushkin.

British women's number one Johanna Konta earned only her second victory of the year in the WTA event in Florida.

Konta, seeded 17th and given a first-round bye, won 6-4 7-5 against Poland's Magda Linette in the second round.

Konta had not played since losing in the Adelaide International and, although it was not a straightforward victory with Linette threatening a fightback in the second set, the 29-year-old reasserted control to earn a morale-boosting victory.

Her victory came shortly after the distressing scenes which saw Draper's tour-level debut come to a concerning end.

The British teenager had looked confident as he pushed 33-year-old Kukushkin, before starting to struggle physically towards the end of the first set and calling for the doctor.

Draper, who was trailing 6-5 on serve in the hot conditions, was examined by the medic and had his heart-rate checked before deciding to continue.

Draper fell to the court as he chased a return on set point in the next game and medical staff quickly came on to tend to the London-born player.

He was sitting up with an ice pack on his neck moments later and was able to walk off court.

Speaking several hours later, he said: "I think the conditions got on top of me a little bit today and physically I just need to improve more. I've got a lot to improve on but my level seems to be pretty close."