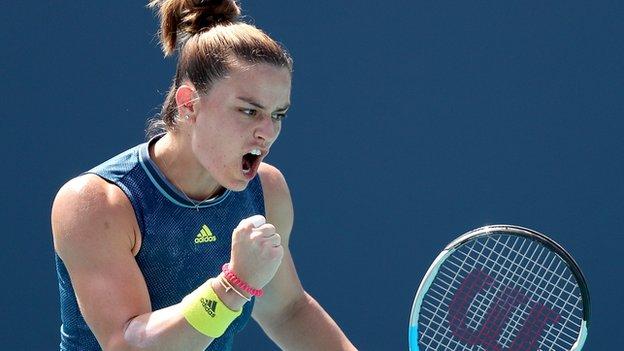 Sakkari has reached the Miami semi-finals for the first time

Japan's Osaka was stunned by the Greek 23rd seed's aggressive start, making 12 unforced errors and not landing one winner in a 21-minute opening set.

Osaka, 23, hid under a towel as she tried to compose herself and fought back to lead 3-0 in the second set.

But Sakkari, from 4-1 down, broke twice to win five games in a row for victory.

All of Wednesday's ATP and WTA results at the Miami Open

Sakkari, 25, celebrated with a loud roar as she earned the biggest win of her career, triumphantly hugging her team after beating a player ranked in the world's top three for the first time.

"I'm so excited, I'm super happy. I have no words," said Sakkari, who set up the meeting with Osaka after fighting off six match points against American Jessica Pegula in the last 16.

"Winning a match like that, where I faced six match points, helped me a lot today. I have made a lot of comebacks and that is probably my trademark."

Osaka's defeat means she will not be able to regain the world number one ranking from Australia's Ashleigh Barty, who faces Ukraine's Elina Svitolina in the other semi-final.