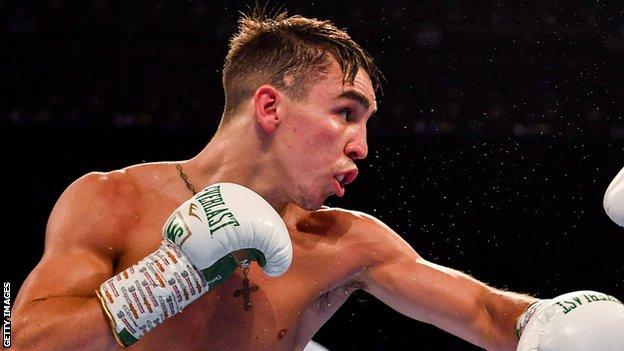 Conlan improves his professional record to 15-0

The Belfast boxer maintained his unbeaten record but was troubled by his spirited Romanian opponent.

The 29-year-old Irishman hopes his victory over Baluta will pave the way to an eventual WBO world title contest with American super-bantamweight world champion Stephen Fulton.

Baluta's work rate and stamina were highlighted throughout the fight, especially during the latter rounds as he stepped up to become the aggressor.

However, Conlan edged the win with impressive consistent head movements and cleaner counter-punches throughout, constantly slipping between orthodox and southpaw stances.

The clash turned into more of a toe-to-toe brawl by the end.

Conlan, a bronze medallist at the 2012 Olympics, showed some of his trademark messy methods, often dragging or pushing Baluta down. The 27-year-old Romanian sustained six slips to the canvas throughout the bout, although none were considered official knockdowns by the referee.

The west Belfast native later remarked that Baluta was "a perfect kind of test at super-bantamweight" and said he was "tougher" than expected.

"Game as they come. But he was missing tonnes of punches so I wasn't really worried," Conlan told BT Sport.

"When they called out a draw, I was thinking what's going on here.

"I don't even know how the second card was that close."

Baluta beat Irish fighters David Oliver Joyce and TJ Doheny in his last two fights, but failed to live up to his self-professed moniker of 'Irish Slayer' against Conlan, who was fighting for the first time since August.

While Conlan outlined his desire to fight for the WBO world title after seeing off Baluta, he accepted he has "to be patient".

He plans to fight in August, preferably back on home turf in Belfast, whether it's "a tune-up bout or if Fulton is ready".

"If I have to wait until December that's no problem, but I know I'll fight for the belt."