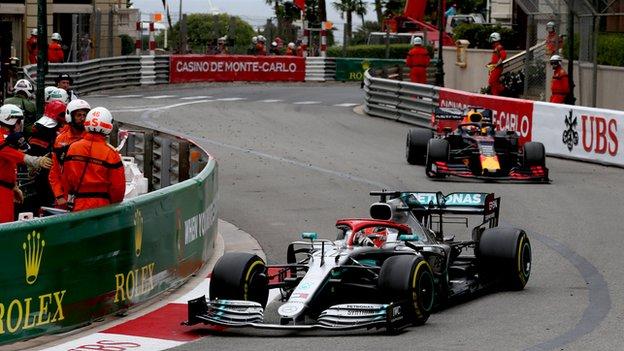 Lewis Hamilton won the last Grand Prix in Monaco in 2019

Monaco is to open grandstands to the public at its grand prix this month.

The Mediterranean principality said that grandstands will be at up to 40% of full capacity for the three days of Formula 1 action on 20, 22 and 23 May.

Attendance will be limited to a maximum of 7,500 spectators per day, and there will be no restriction on the country of origin of those attending the event.

On Friday – a rest day for F1 that has other events on track – capacity will be limited to 3,000 people.

Spectators will have to take a PCR test for Covid-19 no more than 72 hours before attending the event and take proof of a negative result with them to the track.

The move follows a decision by the organisers of this weekend's Spanish Grand Prix to allow up to 1,000 circuit members to attend the race on Sunday.

There were no spectators allowed at either of the first two European events of the F1 season, in Portugal last weekend and Imola in Italy two weeks before.

Bahrain allowed 4,500 spectators to attend the season-opening race at the end of March, but it was open only to those who had been vaccinated against or recovered from Covid-19.