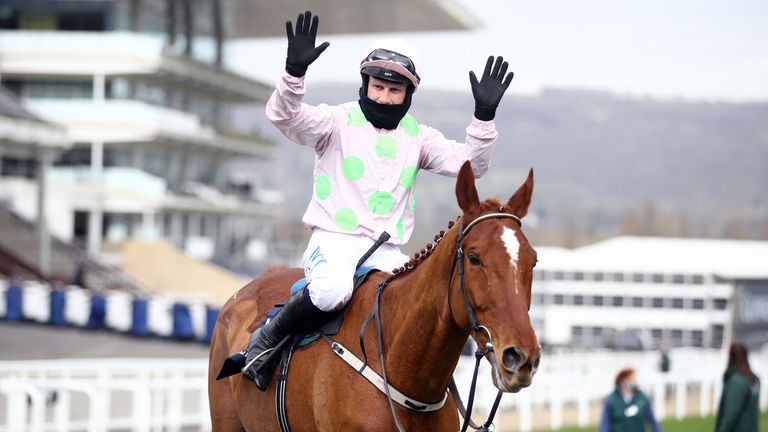 Monkfish maintained his unbeaten record over fences with a comprehensive success in the Brown Advisory Novices’ Chase at Cheltenham.

A narrow winner of the Albert Bartlett Novices’ Hurdle at last year’s Festival, the Willie Mullins-trained chestnut was the 1-4 favourite to strike gold in the Cotswolds for a second time, having been faultless in three previous chase starts.

It was not entirely plain sailing for odds-on backers, with The Big Breakaway more than matching Monkfish in the jumping department for much of the three-mile contest, before Paul Townend’s mount displayed his superior class to move clear before the home turn.

The presence of the riderless Eklat De Rire, who unseated Rachael Blackmore earlier in the race, will have had Monkfish’s supporters sweating in the home straight, as would a mistake at the final fence.

But it ultimately made no difference to the result, with the giant seven-year-old galloping up the hill to score by six and a half lengths from Fiddlerontheroof.

Mullins said: “I think that is the most nerve-wracking race I’ve ever watched – 1-4 in a three-mile novice chase around Cheltenham is not good for the ticker, especially with the way he jumped the last.

“Chatting to Paul he said he was idling on the first circuit, watching the jeep on the inside, the men at the fences – anything bar concentrating on his jumping. When he started racing alongside the other one (The Big Breakaway) things started getting better.

“Then he had to put up with the loose horse, but at least it stayed straight. It was very nerve-wracking for me.

“It’s testament to him that having jumped the last the way he did he was still able to quicken away from the others, I thought that was impressive once I’d got over my fright.”

He added: “The first time he ran for me I thought he was a slow, staying hurdler so I’m amazed at the improvement he’s shown. He’s learning, he was very green coming from the point-to-point field. His performance here last year was fantastic and he’s franked it today.

“I imagine the Gold Cup will be his aim. I think he just lacked concentration today due to lack of runners – Paul said he must have thought he was only schooling today, not racing.

“In a race like the Gold Cup there should be no worries about that.”