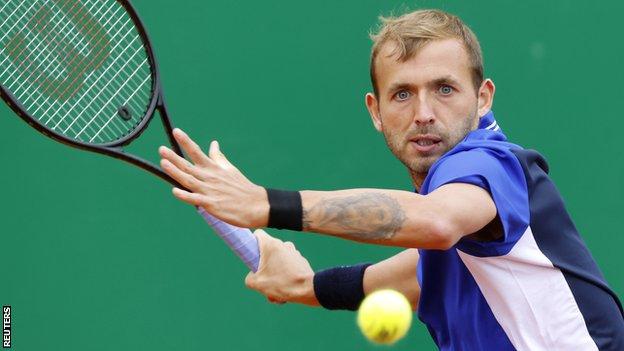 Evans had previously enjoyed little success on clay until this week, when he shocked world number one Novak Djokovic on the way to the last four.

However, beating Tsitsipas proved a step too far as 30-year-old Evans was outclassed in a 6-2 6-1 defeat.

Tsitsipas will meet Russian sixth seed Andrey Rublev in the final on Sunday.

Despite the disappointing nature of a one-sided defeat, Evans reflected positively on a remarkable week playing on a surface he had previously spoken about his dislike of.

The world number 33 had only ever won four clay-court matches at the highest level – two main-draw matches at Barcelona in 2017 and two Davis Cup matches in 2013 and 2017 – before his surprising run in Monte Carlo.

Not only did he beat Djokovic in the last 16, but he also earned wins over Serbia's Dusan Lajovic, Poland's Hubert Hurkacz and Belgium's David Goffin – who have all won or played Masters finals in their careers – to reach the last four.

"It's been a great week. I won't ever forget beating Novak," Evans said. "But it's been pretty long. It's been mentally pretty draining."

Evans caused problems for his previous opponents with his variety, but could not do the same against 22-year-old Tsitsipas, whose quality shone through.

"It was difficult. Obviously it doesn't help the way he plays. He's very aggressive," said Evans.

"There's still work to be done. I can't be negative about today. I have to park that and go again really."

Tsitsipas dominated his service games as Evans won just 11 return points, while taking five of the 11 break points he created against the Briton.

"I am very happy, I found ways to play at my best," said Tsitsipas, who reached last year's French Open semi-finals.

"He has a very unique way of playing, I haven't seen many play this way on clay.

"Slicing gave me opportunity to run around and hit the forehand, it gave me time to think and picture the way I wanted to construct the point and play it."