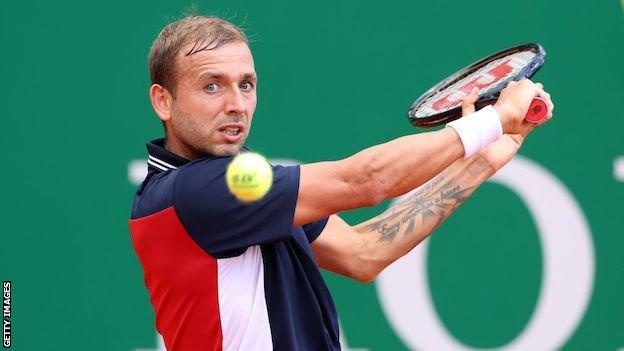 Dan Evans sealed his first tour-level victory on clay in four years with a first-round win over Dusan Lajovic at the Monte Carlo Masters.

He last won on the surface in qualifying in Rome in May 2019, while his last tour-level clay win was in Barcelona in April 2017.

Evans will play Miami Open champion Hubert Hurkacz in the second round.

The match started on Monday but went into a second day after Evans had taken the first set as rain stopped play.

Serbia's Lajovic took a 6-4 lead in the second set before Evans forced two match points, only to scupper his opportunities. He saved another three set points but Lajovic levelled the tie on his sixth chance.

However, Evans was able to capitalise on a shaky start to the deciding set by Lajovic, clinching the win on his fourth match point.

"It obviously got a bit ugly in the second set," Evans told Amazon Prime Video. "It was difficult because the last few matches have been tough, especially last week, and I was thinking about that a bit.

"It was tough to swallow the missed smash but I came back and I thought I played well throughout the whole match to be honest.

"Dusan's a good clay-court player. It sounds a bit silly but it's better when I play a clay-courter on this stuff because they're not used to my game so much."