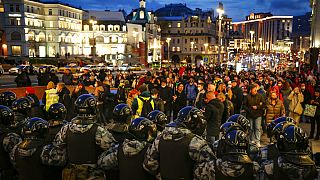 Tens of thousands of people took part in demonstrations that swept across Russia late on Wednesday in support of jailed Kremlin critic Alexei Navalny.

Many people were apprehended before protests even began, including two top Navalny associates in the Russian capital. The Russian human rights monitoring project OVD-info said it had counted 1,004 arrests across the country by the time the St. Petersburg demonstration ended at 8:30pm CET, and 1,495 by 11pm.

Allies of the imprisoned Russian opposition leader had called for rallies in around 100 cities across Russia on Wednesday. 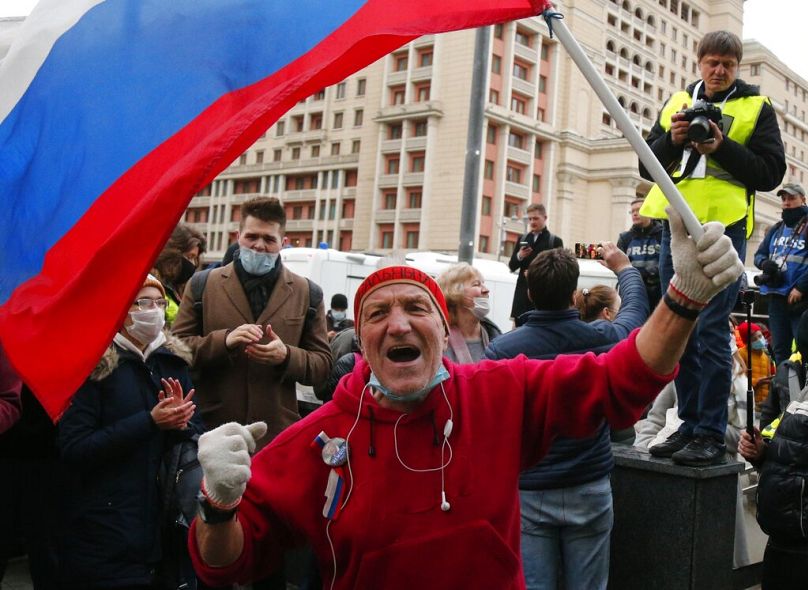 The demonstrations began at 7pm local time in each city, moving west across the country, and were arranged to coincide on the same day as Russian President Vladimir Putin’s annual address.

Navalny’s organization called for the Moscow protesters to assemble on Manezh Square, just outside the Kremlin, but police blocked it off.

Instead, the itinerary was changed to include Tverskaya Street, which is the main road leading up to the Kremlin, the State Duma and the Bolshoi Theater, all the way to the FSB’s headquarters, Navalny’s team said on Twitter.

Footage released by news agencies showed thousands of protesters marching through central Moscow. Russia’s Interior Ministry said 6,000 people were participating in Moscow and 4,500 in St. Petersburg, while observers put the figure in Moscow in the tens of thousands. 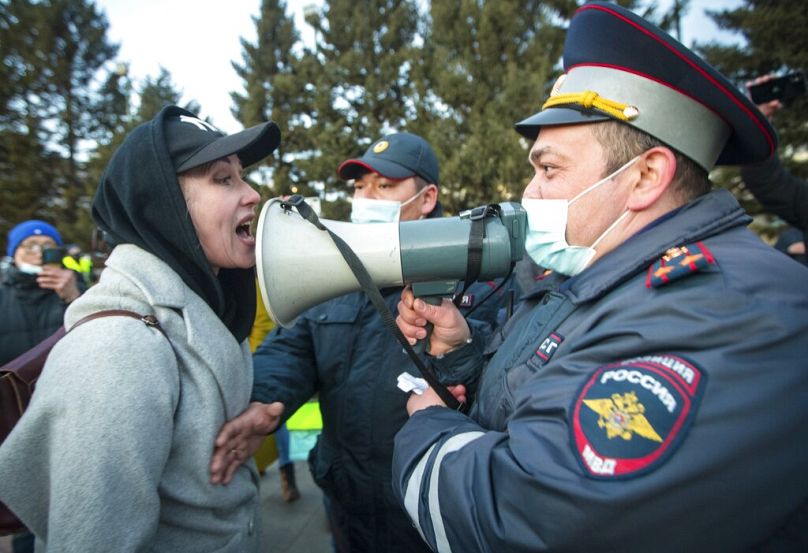 A woman argues with a police officer in Ulan-Ude, Buryatia, near the Russia-Mongolia borderAnna Ogorodnik/Copyright 2021 The Associated Press. All rights reserved

Police in Russia’s fourth-largest city, Yekaterinburg, estimated the protest size at 5,000 people while Navalny’s local office estimated the crowd size at 13,000 to 14,000.

“This is real Russia – free and without fear!” Navalny’s team tweeted along with pictures of streets crowded with protesters in the capital.

In St. Petersburg, police blocked off Palace Square, the vast space outside the Hermitage Museum, and protesters instead crowded along nearby Nevsky Prospekt.

There were no comprehensive reports of turnout throughout the country and it was unclear if the rallies would match the size and intensity of protests held in January after Navalny was arrested.

In the capital city, police had ramped up security presence on the streets and closed Red Square earlier in the day.

The country’s Interior Ministry and the Prosecutor’s Office had warned days earlier that they would take “measures” if unauthorised rallies were held. 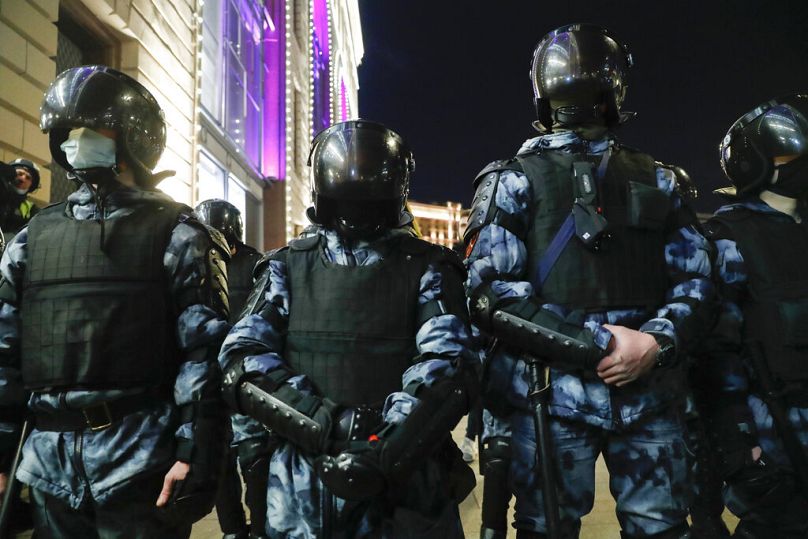 Police block the street during the rally in Moscow.Pavel Golovkin/AP

Previous nationwide protests in support of Navalny in January resulted in more than 11,000 arrests and at least seven lengthy prison sentences on charges of “violence” against the police.

Two close associates of the Kremlin critic were also detained hours before Wednesday’s protests were due to begin.

Lyubov Sobol, a close ally of Navalny, was removed from a taxi near a Moscow metro station on Wednesday morning by people in “uniform”, her lawyer said on Twitter.

Meanwhile, police arrested Navalny’s spokeswoman Kira Yarmysh near the entrance of her apartment building, according to her legal team. Her lawyer later tweeted to say that Yarmysh, who was already under house arrest with no internet, had been sentenced to 10 days in a detention center for posting an unauthorized tweet. 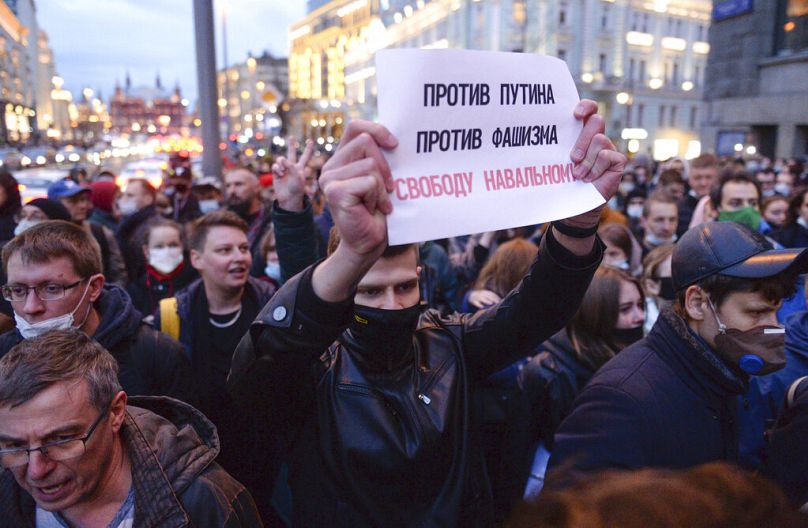 A man holds a poster that reads “Against Putin. Against Fascism. Freedom for Navalny” in MoscowDenis Kaminev/AP

Police also searched the offices of Navalny’s organization in Yekaterinbrug and detained a Navalny-affiliated journalist in Khabarovsk.

“The detention of supporters of Alexei Navalny in advance of planned protests in Russia today are deplorable,” said Charles Michel, President of the European Council.

“Authorities must respect the right to assembly,” he added on Twitter.

“I urge that the necessary and quality medical care be granted to Alexei Navalny and that he be released from prison.”

The Russian authorities also opened a case against Lyubov Sobol, a lawyer for Navalny’s Anti-Corruption Foundation (FBK). She has been told to attent court tomorrow and faces up to 30 days of administrative arrest or a fine of up to 300,000 rubles ($3,900).

A picture of Lyubov Sobol in custody in Donskoy District, posted by the Navalny campaign.

Navalny was arrested in January upon his return from Germany, where he had spent five months recovering from a nerve agent poisoning he blames on the Kremlin. Russian officials have rejected the accusation.

He was sentenced to two and a half years in prison for violating parole related to a 2014 fraud charge, which human rights organisations have labelled “political”.

On March 31, Navalny began a three-week hunger strike in prison to protest against officials’ refusal to let him be treated by his doctor for back pain and other ailments. Russia’s penitentiary service has said Navalny was getting all the medical help he needs. 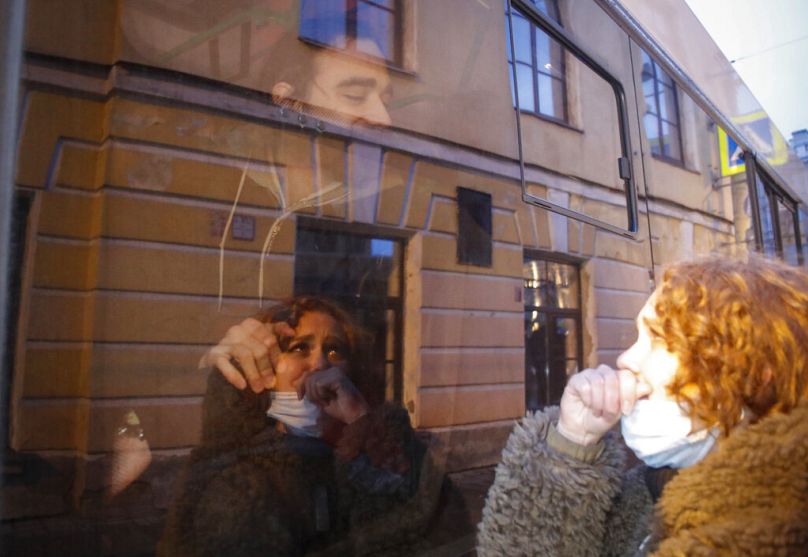 A detained protestor looks on from inside a police van in St. Petersburg.Dmitri Lovetsky/AP

But on Saturday, Navalny’s personal physician said the opposition leader’s health was deteriorating and has demanded that he be transferred to a civilian hospital.

Protests in solidarity with Navalny and Russian demonstrators also took place in other countries including Poland, Israel, Italy and Germany.

Navalny’s allies vowed on Wednesday to continue their work despite the pressure. “It is, of course, an element of escalation,” close ally Vladimir Ashurkov and director of the Foundation for Fighting Corruption, told AP. “But I have to say we were able to regroup and organize our work despite the pressure before. I’m confident that now, too, we will find ways to work… We have neither the intention nor the possibility to abandon what we’re doing.”