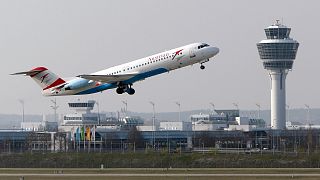 Austria on Thursday slammed Russia after it refused to allow an Austrian Airlines flight to be rerouted to avoid Belarusian airspace, resulting in the Vienna-Moscow service being cancelled.

“Based on a recommendation by the EU Aviation Safety Agency (EASA), Austrian Airlines has suspended flights through Belarusian airspace until further notice. For this reason, adjustments to the flight route from Vienna to Moscow are necessary,” said Austrian Airlines spokesperson Leonhard Steinmann.

“A change in flight routes must be approved by the authorities. The Russian authorities did not give us this permit. As a result, Austrian Airlines had to cancel today’s flight from Vienna to Moscow.”

Passengers on the cancelled flight were rebooked, the airline said.

Meanwhile, an Air France flight from Paris to Moscow on Friday was cancelled due to a lack of clearance from Russia for a change of route to avoid Belarusian airspace.

In a statement, the airline said: “Air France confirms the cancellation of flight AF1154 for operational reasons linked to the bypassing of Belarusian airspace requiring a new authorisation from the Russian authorities to enter their territory.”

The moves are the latest fallout from what Western nations have called hijacking and piracy by Russia’s ally Belarus on Sunday, which forced a Lithuania-bound Ryanair flight from Greece to land in Minsk, where a Belarusian dissident journalist on board was arrested.

In response, the European Union has urged its airlines to avoid Belarus and its airspace, but Russia has reacted by denying such carriers permission to fly to Russia, as it did with a Paris-Moscow Air France flight that was cancelled on Wednesday.

“The Russian reaction is absolutely incomprehensible to us,” Austria’s Foreign Ministry said in a statement on Russia’s denial of permission for the Austrian flight, adding that it was a disproportionate response to measures taken after Sunday’s “brutal act of air piracy”.

“The Austrian Foreign Ministry communicated this to the Russian ambassador today. The Austrian ambassador in Moscow also presented this position to Russia,” it said, calling on Moscow to clarify its position and adding that all flights over and to Russia should be able to continue without problems.

Russia’s transport ministry told AFP that it had “no comment for now”.