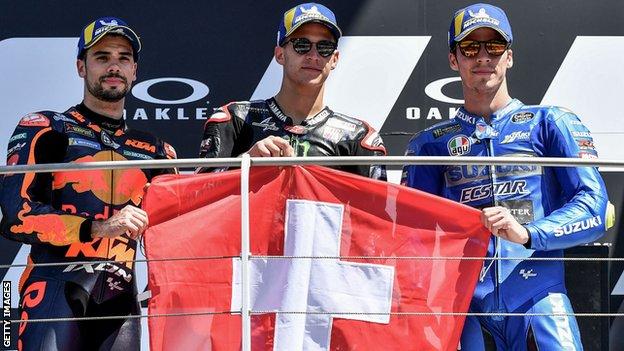 Second-placed Miguel Oliveira, winner Fabio Quartararo and third-placed Joan Mir held a Swiss flag as a tribute to Moto3 rider Jason Dupasquier, who died after a crash on Saturday

Fabio Quartararo admitted his win at the MotoGP Italian Grand Prix was "not a great feeling" as he dedicated victory to Jason Dupasquier.

But the weekend was overshadowed by the death of Swiss rider Dupasquier, 19, after a crash during Saturday's Moto3 qualifying session.

"Strange day, honestly a lot of emotion before the race," said Quartararo.

"It's not a great feeling – you achieve a win but we lose one of our friends."

A minute's silence was held before the race in memory of Dupasquier.

Quartararo added: "To start the race after that one minute of silence was really difficult. Every time at turn nine I was thinking of Jason, and this win was for him."

The Yamaha rider stopped his bike on the track for a few seconds to pay tribute to Dupasquier and had his name printed on his helmet as well as waving the Swiss national flag at the end of the race.

Quartararo's victory means he now leads the MotoGP title standings by 24 points from France's Johann Zarco, who was fourth in the race.

Italy's Francesco Bagnaia slipped to third in the championship standings after crashing out early.